Cooco’s Den is a wondrous restaurant located amidst the red light district of Heera Mandi in Lahore. Created by artist Iqbal Hussain, the Den has amazing rooftop views, paintings, bric-a-brac and sculptures, combined with an eclectic mix of food and drink.

The location of Cooco’s Den is amidst the city’s famous and busy red light district area known as Heera Mandi (Diamond Market).

The Den is a food connoisseur’s delight given that it serves everything from customary appetisers to delectable Lahore entrees, winding it off with great tasting desserts.

The top floor open terrace is where the most striking treasure is found. Besides serving exceptional food, the Den is situated amongst some of the most historic proportions of the city including the famous Badshahi Mosque and Lahore Fort. 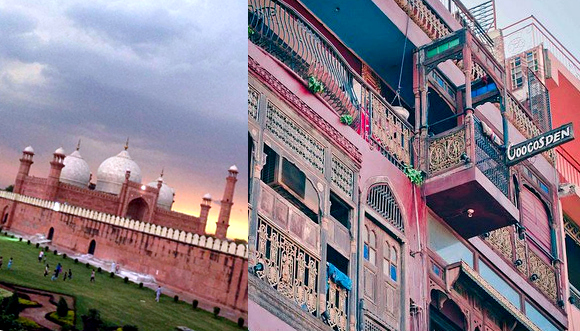 In addition, one’s appetite for an entire gastronomic and cultural experience is whetted by the surrounding architecture of Cooco’s Den, the history of the haveli (building) itself and the drive up to the restaurant where one has to pass through the Mall Road, past NCA, Government College and Data Darbar.

It is in this specific haveli that Lahore dancing girls once persuaded and seduced men to set aside their rupees and moralities for an evening. 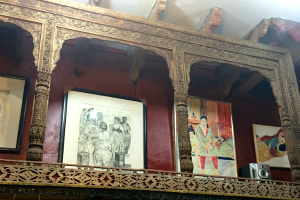 Given that a few blocks away from the restaurant the bargain for bodies continue, even now up to date, dressed prostitutes can be seen walking in groups nearby the restaurant.

Acclaimed international artist Iqbal Hussain preserved the original haveli that was passed through a family of courtesans and came up with the concept of this eatery.

The fact that Hussain has creatively established the restaurant without shying away from his childhood is a good thing. This restaurant is now one of the major reasons behind the elite visiting the area unashamed.

Employing an innovative way of bringing back people to the area, in 1996 Hussain started providing simple meals at his youthful home, which served also as his art gallery. 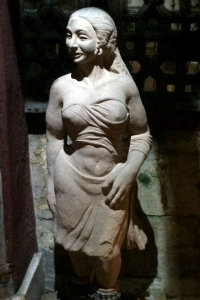 Initially the place failed to impress locals as they sneered at Hussain for attempting to revive such an area that was considered to be indecent.

An American diplomat who later came to see Hussain about having a portrait done for him, was captivated by his story, food and paintings. Many foreigners began flocking to this restaurant as the news of Hussain‘s outstanding food and paintings spread out.

Cooco’s Den became a status symbol almost immediately. An opportunity to voyeuristically peer into the abject world arose with every good meal served, providing decent Pakistanis with an illicit adventure.

In spite of the transformation around his restaurant and home, Hussain remains an intimate part of his community, far from only titillating the wealthy with his magnificent cuisine and growing rich as a result of their hungers.

On entering the restaurant, the inner Lahore spirit is the very first thing that strikes you. The five-floor building has beautifully retained its period features, whilst being converted into a glamorous eatery. If the building had not been so old, the restaurant décor could be referred to as bordello kitsch.

After ascending the spiraling stars, visitors reach the rooftop of the restaurant. The table view and old ragged rooftop combination makes the dining experience more charming and above all glorious.

The darkened allies of Heera Mandi and Badshahi Mosque’s softly glowing courtyard can simultaneously be seen from the top floor open terrace. The majestic views and setting gives food for thought. Speaking to the media, Hussain said:

“It’s such a lovely view that you cannot find anywhere else in Pakistan.” 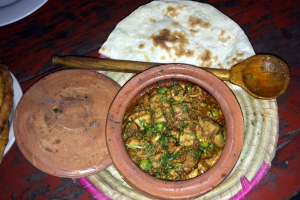 As an order gets prepared, it is placed and delivered via rope-hung baskets as opposed to physically being carried upstairs.

While all the food here will tickle your taste buds, some of the best dishes include: diced chicken (Achari) breast marinated in a spicy tart blend of pickled mango and chicken karahi, which includes boneless chicken in a gravy type masala filled with fresh green chilies.

Home style cut masala fries with a tomato sauce dip is also very delicious. There are plenty of breads on the menu from thick pillowy naan, to the crisper thinner butter naan and tortilla like baked roti. 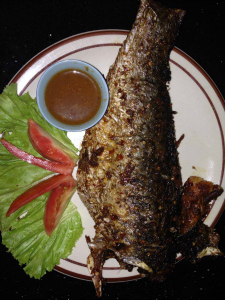 On the way out, whilst digesting all the lovely food, you are in for a treat. Hussain’s searing portraits of district residents have emblazoned walls of the restaurant at the bottom of the precarious stairway leading back to the ground level.

These portraits include wizened harmonium players, thickset madams and teenage prostitutes. Paintings of River Ravi, spiritual statuettes and a book about Hussain’s life history can also be found here.

Overall when leaving the restaurant, one is convinced of Hussain’s artistic touch. The dining experience is simply fantastic regardless of the number of times you visit the place.

For individuals looking for something different, Cooco’s Den is truly a first-rate eatery for a world-class city that you should never miss in case you pay a visit to Lahore.