5 Popular Dishes that Originate from the United States

While it is obvious that some foods originated in the United States, it is unknown for some due to their popularity. Here are five US-origin dishes.

He was fond of making frozen desserts while on the job

Dishes from the United States are popular all over the world and while some are obvious, others are more obscure.

You might know a bit about the recipes of some popular foods, but have you ever wondered about their history?

Sometimes it’s obvious where they come from, such as croissants being from France and dumplings from China.

Some foods, though, have surprising countries of origin.

When it comes to the United States, they have a plethora of dishes which originate there and take influence from the variety of cultures.

However, it may not be known what the country of origin is for some of them so it is a surprise for some people when they discover that it is from the United States.

Here are five dishes that are popularly served all over the world but are actually from the United States. 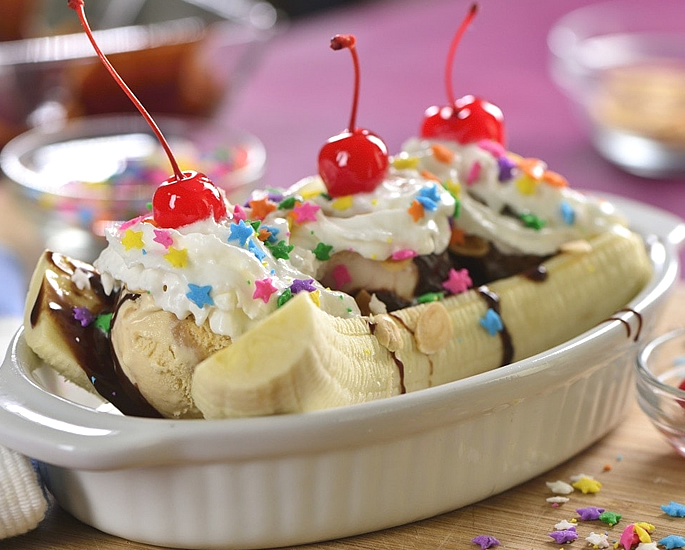 A banana split is a wildly decadent dessert, and you need a major sweet tooth to finish it on your own!

It usually consists of three scoops of ice cream, each scoop being chocolate, strawberry and vanilla.

These are then arranged in a row between two banana halves before the toppings are added.

Toppings such as whipped cream and chocolate syrup are generously sprinkled on, with a cherry on top as the final touch. Other toppings include sprinkles and chopped nuts.

As with most foods, there are multiple accounts on who really invented the banana split.

But whatever the account may be, the origin is always the United States.

The most popular version points to David Strickler, a 23-year-old apprentice pharmacist in Latrobe, Pennsylvania in 1904.

He was fond of making frozen desserts while on the job, and he came up with a banana-based triple ice cream sundae.

The dessert was popular among students of the nearby Saint Vincent College and it led to far progression beyond Latrobe. 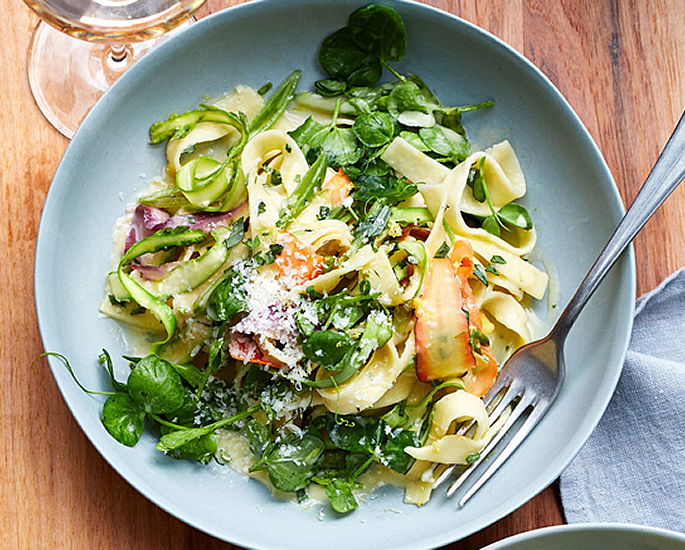 Despite all the carbohydrates, this classic pasta dish is healthy and refreshing because it’s topped off with plenty of vegetables.

It is traditionally a spring and summer dish, which is reflected by the choice of vegetables.

Pasta primavera is also flavoured with cheese, butter and spices. It is accompanied with a light lemon cream sauce for an added depth of flavour.

Because it is pasta, you might be thinking that it is from Italy, but pasta primavera actually emerged in New York City during the 1970s.

Although there were a lot of chefs who argued over who created it, it was the New York restaurant Le Cirque that first served it up to the public.

Sirio Maccioni, the chef and co-owner of Le Cirque, claimed that it was his wife who used the ingredients that were on hand during a trip to Nova Scotia, Canada.

Another source said that he showed Maccioni and another chef a similar dish which was later modified.

The simple dish first appeared as an unlisted special at Le Cirque before it became famous through a 1977 article in the New York Times. 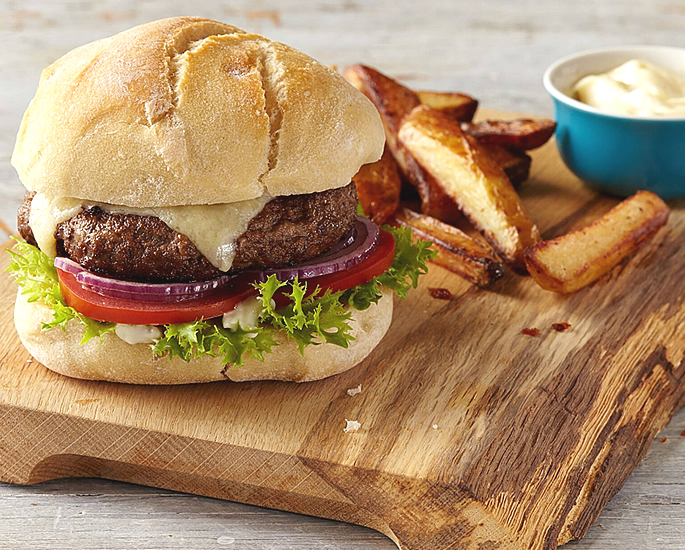 A cheeseburger is simple enough, it is just a hamburger with a slice of cheese placed on top of the patty.

This is usually done when the patty is freshly cooked and hot, so the cheese melts too.

Although it is simple, it is one of the most popular United States origin foods.

Available in countless fast-food restaurants, cheeseburgers are loaded up with ingredients like lettuce, tomatoes and onions, and topped with sauce.

But more experimental versions include mushrooms and eggs.

While it has been disputed that the hamburger originated in Germany, the cheeseburger became popular in America during the 1920s and 1930s.

Teenager Lionel Sternberger is said to have created the cheeseburger while working at his father’s sandwich shop in Pasadena, California.

He was a fry cook and experimentally added a slice of American cheese to a sizzling hamburger. Lionel and his father called it the “cheese hamburger”.

Other restaurants claimed to invented it but the cheeseburger remains one the world’s most popular foods, served in most eating establishments. 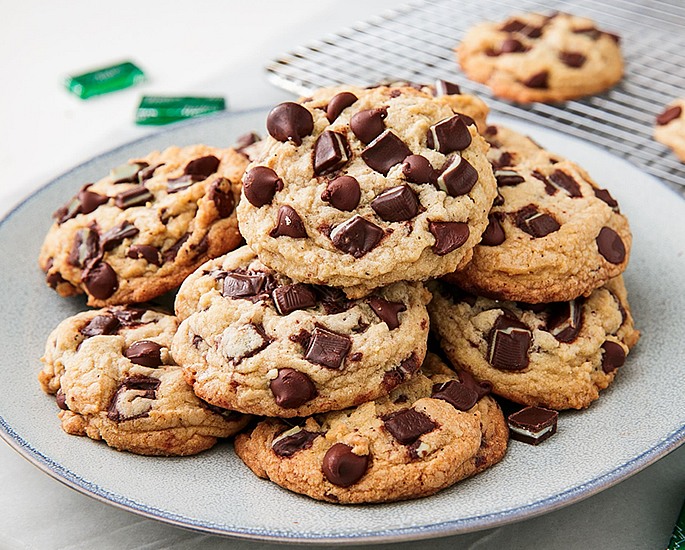 The famous chocolate chip cookie is from the United States, and it shows because it is also the country’s most widely consumed cookie!

Characterised by chunks of chocolate that are embedded into the dough, it already has countless variations today.

Other ingredients like cacao butter are added for a richer taste and almonds for heightened texture.

The chocolate chip cookie was invented during the 1930s by Ruth Wakefield who owned a popular home-cooking restaurant called the Toll House Inn.

It is wrongly said that she accidentally created the cookie by adding chocolate chunks which she thought would melt.

She actually invented the cookie on purpose as she wanted to give the diners something different after serving thin butterscotch nut cookies with ice cream.

Wakefield added chopped up pieces from a semi-sweet chocolate bar and incorporated into a cookie, called the ‘Toll House Chocolate Crunch Cookies’.

In 1938, a new edition of her cookbook included the recipe for the cookies and its popularity skyrocketed in American homes. 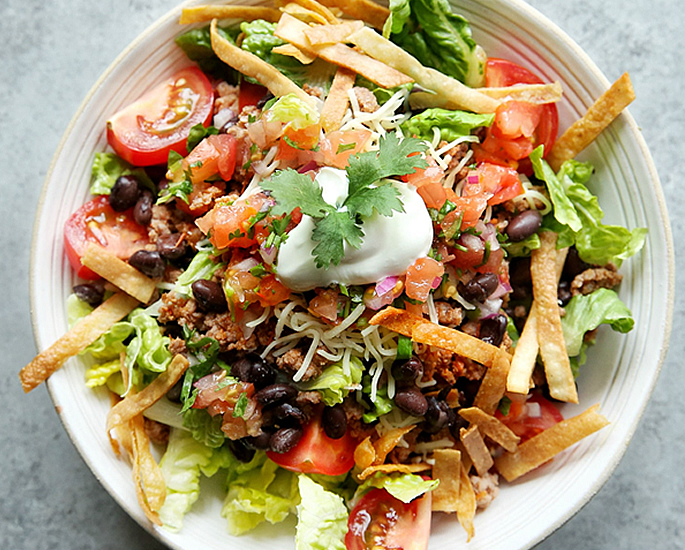 A taco salad is essentially a hybrid of the much-loved Mexican taco and the American salad.

It is made by removing the shell from the taco, adding tortilla pieces, tossing in more vegetables, along with lettuce and tomatoes. The finished product is a fresh taco salad.

The dish is sometimes served in a fried flour tortilla shell, acting as the bowl.

Its core ingredients remain the same. Ground beef, lettuce, tomatoes as well as other toppings like salsa and cheese.

Nobody disputes that tacos are from Mexico, but what’s unexpected is that the taco salad isn’t.

Looking back at Mexican cuisine, there is no mention of a taco salad. The salad originated in Texas and is therefore a Tex-Mex dish.

It was created during the 1960s as many keen cooks were experimenting by combining American and Mexican culinary influences.

Another early version could be traced back to Elmer Doolin, the founder of Fritos, in the 1950s. He called it Ta-Cup and he offered it as a menu item at his Casa de Fritos restaurant in Disneyland.

It is difficult being a food historian as it is usually challenging to trace the true origin of a specific dish, especially if it is popular and served all over the world.

People in different areas could also have created it on their own.

Although there is a lot of debate about the exact inventors of these five dishes, what we do know is that these came from the United States.

So now you know, next time you eat a taco salad or pasta primavera, you can attribute it to the right country!

Dhiren is a journalism graduate with a passion for gaming, watching films and sports. He also enjoys cooking from time to time. His motto is to “Live life one day at a time.”
7 Tasty Indo-Chinese Dishes to Try at Home
How Coffee became a Very Popular Drink