The combination of Indian and Italian cuisine may sound obscure but they make for delicious meals. We showcase seven Indian pasta recipes to make yourself.

The crispy cheese is the ideal contrast to the soft spaghetti.

Although it does not come to mind straight away, Indian pasta dishes are a delicious option to go for.

When thinking about a combination of two cuisines, Indian and Italian is not the first but it is one which should be tried out.

As the pasta soaks up the spicy and rich sauces, the result is a mouthful of flavour. More people are experimenting with food and this seems like the perfect opportunity to do so.

Pasta is such a versatile ingredient and there are many variants. From fusilli to lasagne, there is something for everyone.

We have seven fantastic recipes for you to try out. 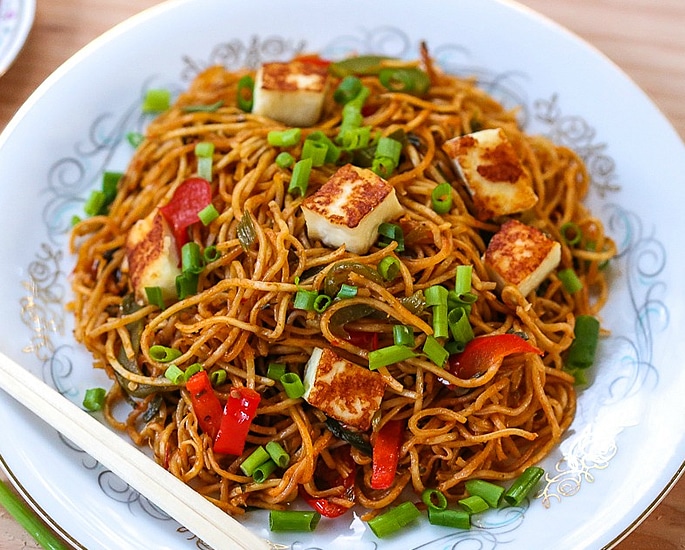 For those who love pasta and is a vegetarian, this spiced paneer spaghetti is an Indian pasta dish to try out.

The spaghetti is mixed in a sauce made of chillies, spring onions, garlic and soy sauce to create an array of Asian flavours.

The spaghetti can be replaced with noodles for a Chinese twist if you prefer.

Incorporating the paneer adds texture to the dish but it also adds a slightly salty taste. The crispy cheese is the ideal contrast to the soft spaghetti.

This recipe was adapted from Honest Cooking. 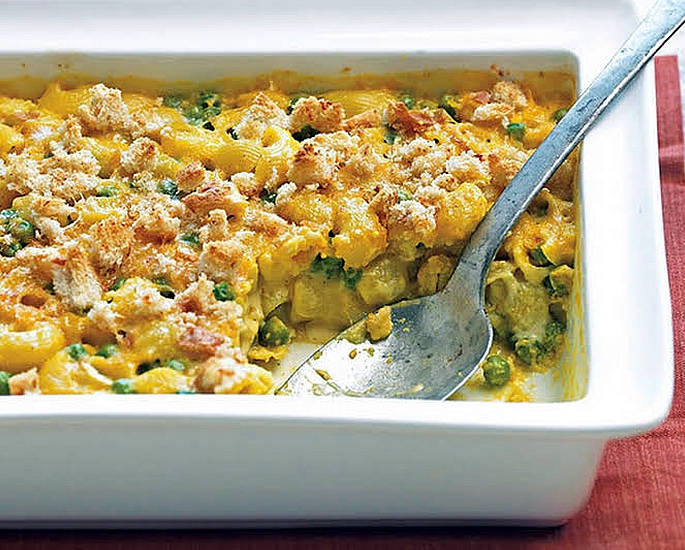 While macaroni and cheese may be a typical Italian dish, this particular recipe puts a Desi twist on it.

This Indian pasta dish is not as creamy as other macaroni and cheese dishes but it uses peas and breadcrumbs for more texture.

A mixture of paprika and cayenne pepper is what gives the dish a smoky and subtly spicy flavour.

Not only does the flavour come from the spices, but the different cheeses also add more depth to the filling meal.

This recipe was inspired by BHG. 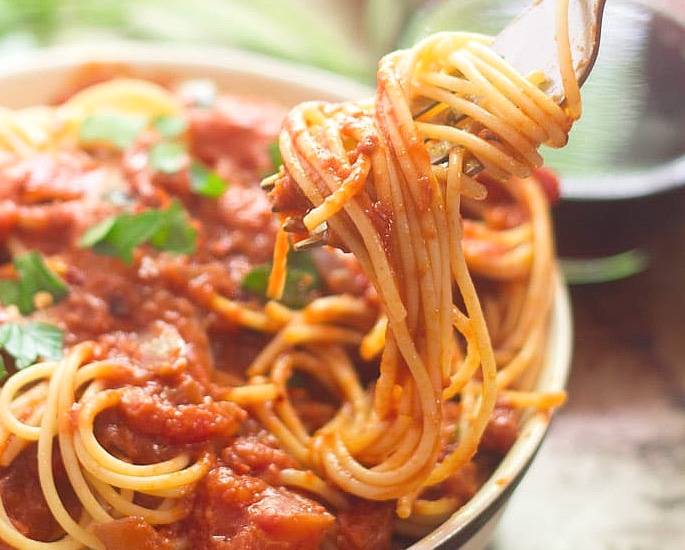 It is a simple pasta dish accompanied by a tomato sauce. However, the twist is that the sauce is flavoured with a mixture of Indian spices.

The result is a delicious sauce which is soaked up by the spaghetti.

Including various spices add a whole new layer of flavour to a basic tomato sauce which creates new opportunities for flavours to be modified.

For the Tomato Sauce 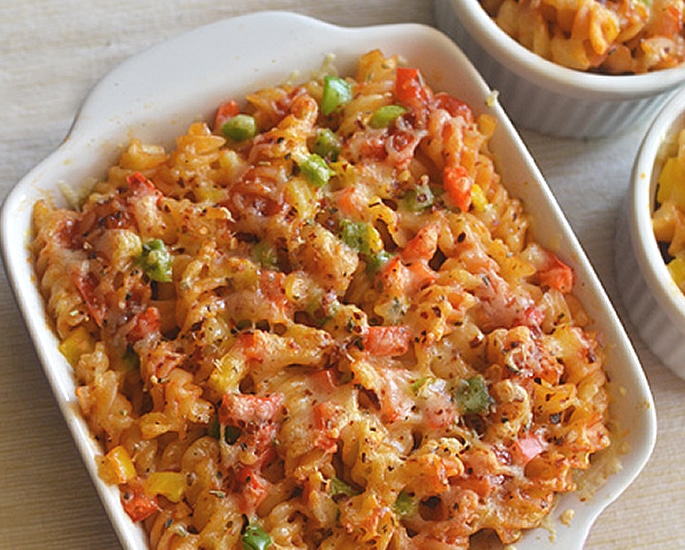 For such a simple Indian pasta dish, it is incredibly flavourful and filling which is why it makes for a perfect evening meal during the week.

The soft fusilli contrasts with the crunch of the peppers. They come together with the slightly crispy but mostly gooey mozzarella cheese.

The addition of chilli flakes adds much-needed heat to the dish among the hint of acidity that you get with both sauces.

This recipe was adapted from Sharmi’s Passions. 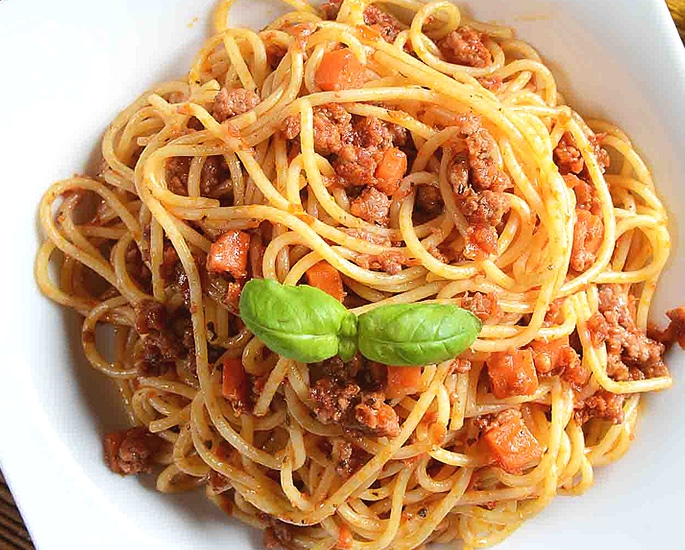 Spaghetti bolognese is arguably the most popular pasta dish but this Indian-style recipe is a delicious variation to appeal to those who enjoy spicy food.

This dish is cooked with roasted bacon, minced meat and a spicy tomato sauce. Any type of mincemeat is suitable for this recipe.

It is best served alongside a crusted cheesy garlic bread to create a hearty dinner. 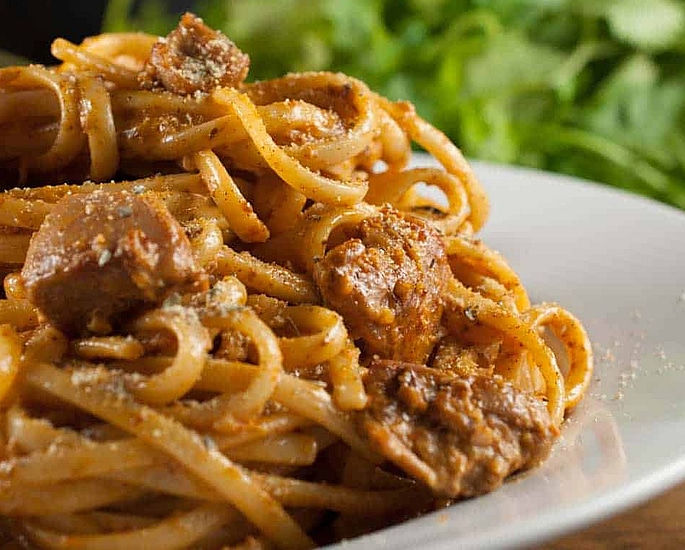 As an Indian pasta dish, this is one of the most authentic as it combines the classic butter chicken with linguine pasta.

The dish is loaded with creamy and spicy butter chicken for a rich flavour throughout.

Linguine is the ideal pasta choice as it is able to hold the buttery flavour of the chicken whereas spaghetti is not suited for such rich sauces.

For the Chicken Marinade

For the Butter Chicken Sauce

This recipe was inspired by A Little Bit of Spice. 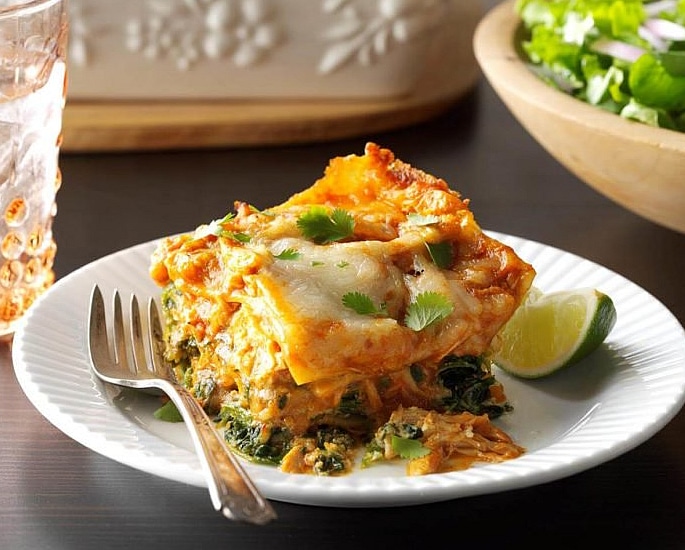 The creamy texture of lasagne incorporates the intense flavours of a simple chicken tikka masala to create a delicious and filling meal.

Pieces of spicy chicken in a wonderful sauce go well with the creaminess of ricotta cheese and coconut milk.

Spinach adds some vibrancy to the dish as well as more flavour. The result is a comforting Indian pasta dish.

This recipe was inspired by Taste of Home.

These delicious Indian pasta recipes either incorporate Indian dishes or have an Indian twist on them.

But all guarantee delicious flavours and textures which are sure to make your mouth water.

The combination of Indian and Italian cuisine is a fresh take on tasty food. While these are step-by-step guides, ingredients can be adjusted to your preference.

These dishes are all unique but they can promise a hearty and satisfying meal.

Images courtesy of BHG, Taste of Home, Crave Cook Click and A Little Bit of Spice