A delicious Indian salad has intense flavours but also refreshing ones meaning they are ideal for the summer. We have seven recipes for you to follow.

Both provide the perfect contrast in colour to the green salad leaves.

The summer weather is here and when it comes to refreshing food, Indian salad should be something to try out.

They incorporate Indian flavours to create a vibrant and delicious dish.

Whether they are vegetarian or non-vegetarian, an Indian salad can promise a multitude of flavours to please the tastebuds.

The combination of spicy pieces of chicken mixed with leafy greens and topped with a yoghurt dressing is something to enjoy.

The best part is that they can be modified. Certain ingredients can be added or removed to suit your preferences.

They are also fairly simple to make. We have seven delicious recipes that are ideal for the summer. 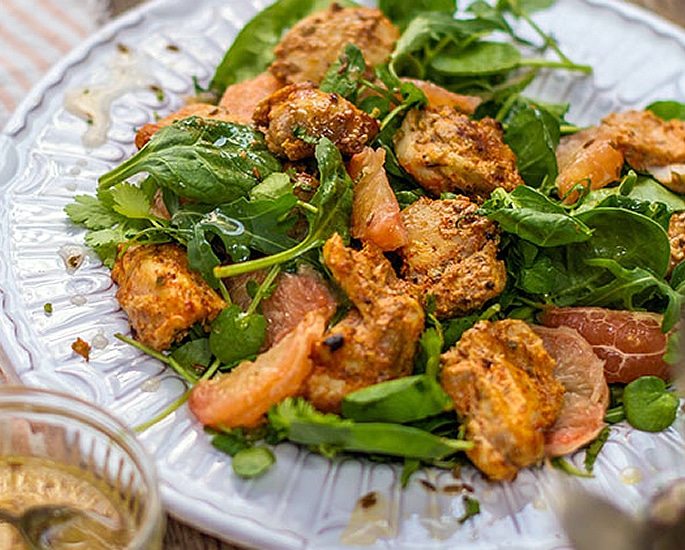 When it comes to an ideal summer salad, this chicken option is perfect as it combines spice and tang.

The chicken is marinated in a tandoori style masala and it is alongside pieces of pink grapefruit. Both provide the perfect contrast in colour to the green salad leaves.

They also add a new texture to the dish. It is finished with a toasted cumin dressing which adds an earthy flavour to the tangy and spicy salad. 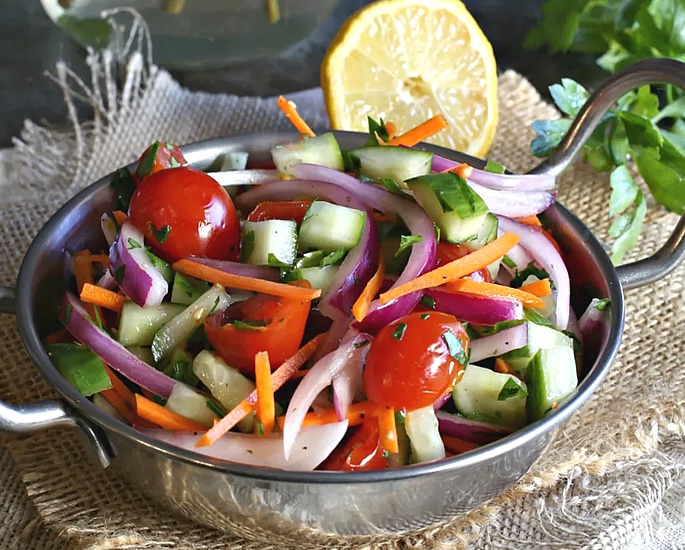 Kachumber salad is a well known Indian salad recipe though the combination of cucumbers, tomatoes and onions are found in other regions with their own variation.

The dressing is what makes this dish unique as it does not contain any oil. Instead, lemon juice, salt and pepper make up a flavourful dressing.

The salt and lemon add an acidic flavour while the black pepper prevents it from being too overpowering by acting as the spice.

Kachumber is a versatile salad because other ingredients such as radishes can be added.

This recipe was adapted from The Spruce Eats. 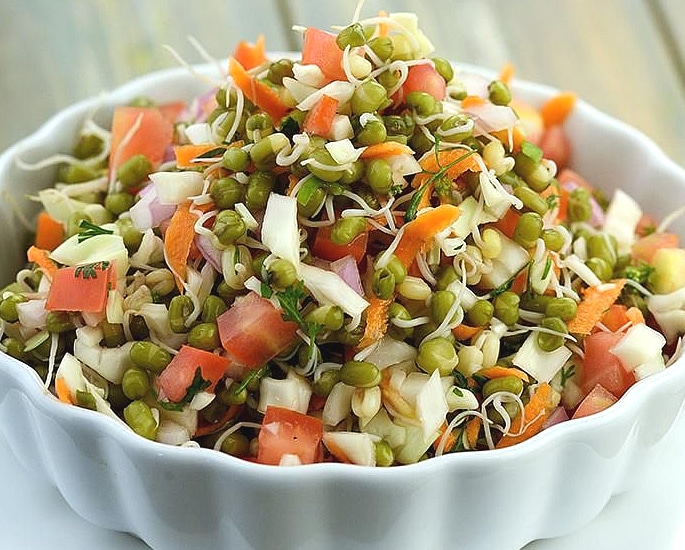 This is a refreshing Indian salad which is perfect for the summer when you want something tasty but not spicy or oily.

Sprouted and cooked moong is mixed with a variety of fresh ingredients like tomatoes and cabbage.

Lemon juice adds some acidity to the dish which is an added depth of flavour to a simple salad.

This recipe was inspired by Tarla Dalal. 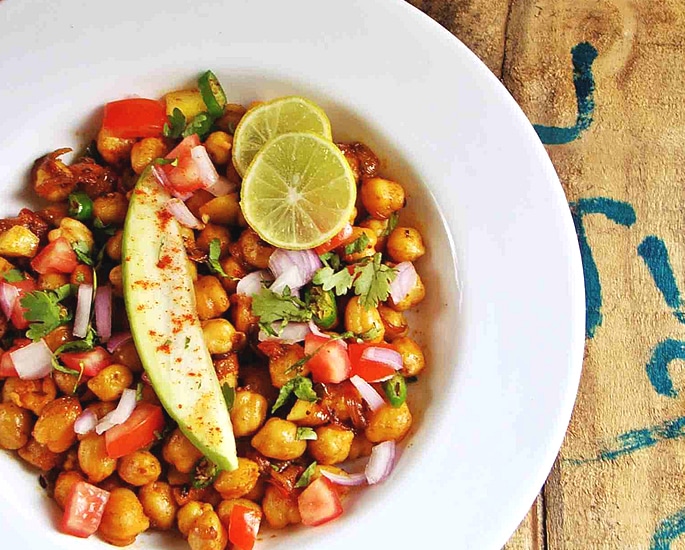 Not only is this refreshing salad ideal for summer but it is also very healthy.

The protein-packed chickpeas are boiled and mixed with fresh ingredients to make a nutritious dish.

In terms of flavour, there is an array. From the spicy chillies to the tanginess of lemon juice, this salad has a balance of flavours.

The inclusion of raw mango adds a slight sharpness to the dish. It also provides the perfect contrast to the chickpeas when it comes to texture. 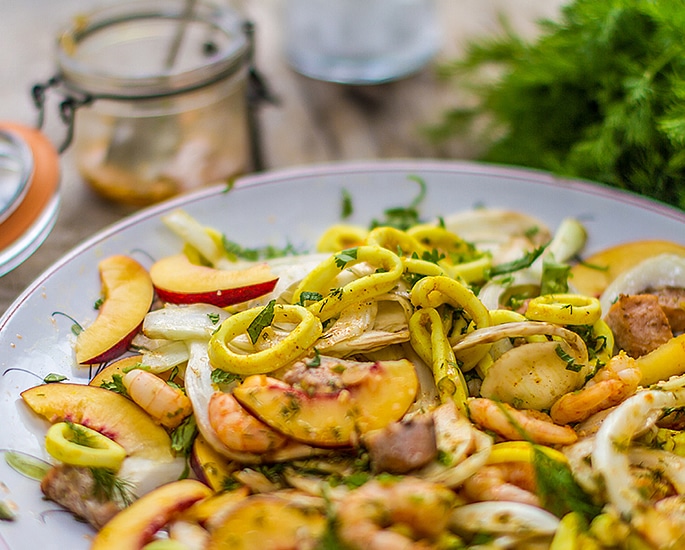 This fennel and seafood salad is filled with wonderful flavours and textures.

The fennel is aromatic with a crispy crunch to it. It has been griddled to give it a slightly smoky flavour.

The salad has a mixture of prawns, squid and salmon which have all been marinated.

It has a garlic and chilli dressing to give the whole salad extra flavour and an overall lift. 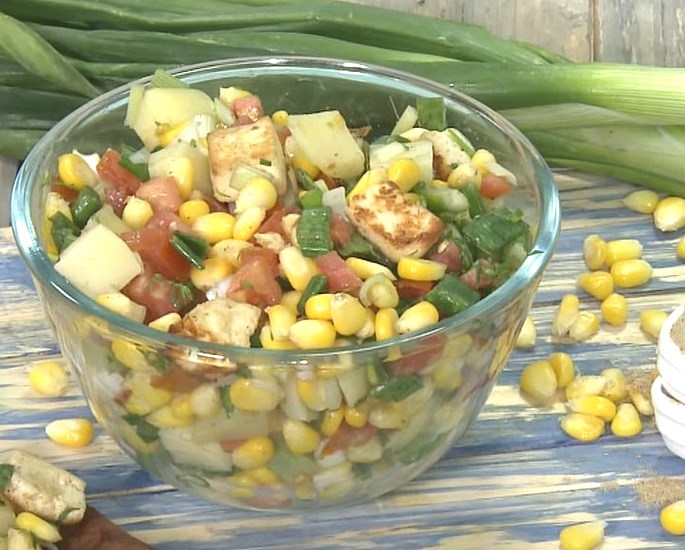 This Indian salad is more robust than others as it is filled with chunky pieces of paneer.

The combination of flavours, textures and aromas is sure to entice salad lovers.

The fried paneer increases the depth of texture and when combined with the juicy corn and tangy tomatoes, it becomes one to try out.

This recipe was inspired by Tarla Dalal. 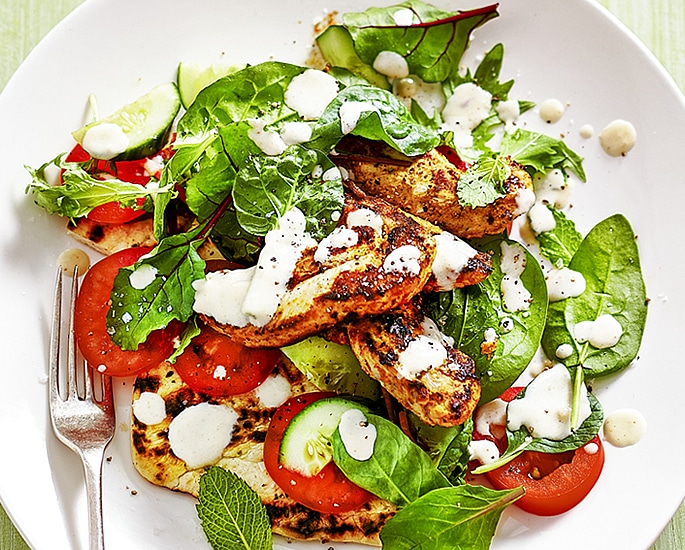 This salad puts a twist on the classic chicken tikka. Tender pieces of spicy and smoky chicken are mixed with crisp greens and tomatoes.

The yoghurt and lemon dressing gives the salad a summery feel as the cooling yoghurt is refreshing against the intense heat from the chicken.

The salad is finished with a hint of sweetness from the mango chutney which is mixed into the dressing.

This recipe was inspired by New Idea Food.

These Indian salads bring a flavourful and refreshing taste just in time for the summer.

They are the perfect accompaniment to the main meal or they can be enjoyed on their own. The simple guides mean they do not take a lot of time.

These recipes combine flavours associated with Indian cuisine which highlights how many variations a salad can have. An Indian salad is one which must be tried.