Indian women across social media are using #NotShaadiMaterial to challenge cultural stereotypes of the ‘suitable woman’ for marriage, sharing their stories.

"I don't look delicate so am I #NotShaadiMaterial?"

Mention the phrase ‘Shaadi material’ to any young, Indian woman and they’re likely to roll their eyes. Referring to a woman’s suitability for marriage, it remains deep within culture and patriarchy.

However, Indian women are calling out this outdated term on social media. Using #NotShaadiMaterial, they challenge the stereotypes surrounding women. Slamming the requirements of whether they are or aren’t ‘suitable’ for marriage.

The discussion stemmed from Star Plus, where host Susheel spoke with Bigg Boss 10 contestant Bani J on 13th November 2017.

During this conversation, the starlet explained how she received abuse on her images. Bani regularly updates fans with images and videos of her workout sessions.

However, she received comments from trolls claiming that she was not shaadi (marriage) material. But she has responded back with this discussion on Star Plus and a viral image. 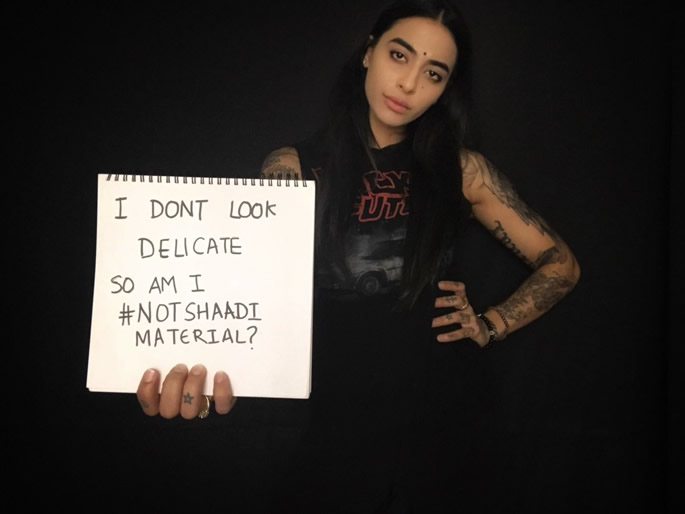 Taken prior to her talk, she held up a sign that read: “I don’t look delicate so am I #NotShaadiMaterial?” In the image, she also captioned it with:

“Just because I like to build my body at the gym and be strong physically, does that make me #NotShaadiMaterial?” Over the course of the day, the hashtag has grown as more women share their own experiences and stories.

For someone unfamiliar with this term, what does it mean? South Asian communities may often use it to deem a woman as marriage material. Through culture, certain characteristics or appearances are often desired in a potential wife.

For example in arranged marriages, parents will look for potential wives for their sons. On the flip side, daughters will be told how to act and dress constantly by their parents, in order so that they are seen as shaadi material. 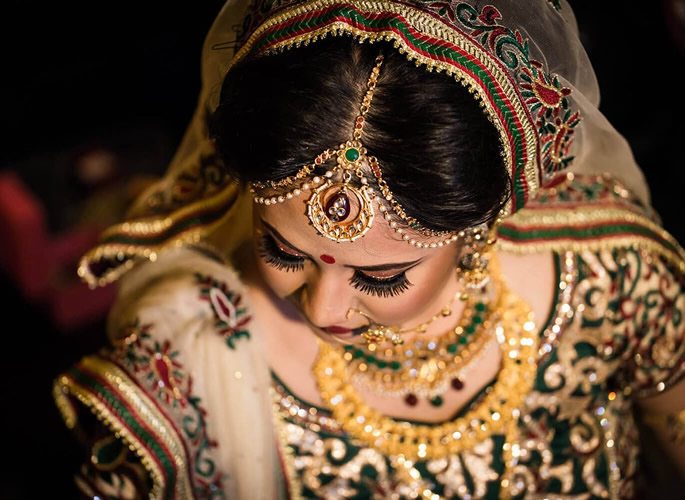 Despite some changes in the outlook of Indian society, requirements of a bride still may include a lighter skin tone, the ability to cook and utmost respect for the husband and in-laws (despite how you are treated).

This all comes under characteristics that are typically seen as feminine and results in an extensive and demanding list. If a woman is seen to have these attributes, she is viewed as shaadi (marriage) material and has a better chance of getting married.

But if she doesn’t, she will be seen as outspoken, self-minded and disrespectful. She will get judged by others, labelling her as someone not to marry.

However, as society becomes progressive, women are straying from these stereotypes. With many now thinking about education and careers, no longer do they desire for marriage straight away. Nor do they want to behave or appear in a certain manner for others to deem them ‘suitable’.

But while Indian women may go to the gym, not make rotis at home or abandon ‘typical’ feminine behaviour, older generations still consider them unsuitable. Hence the endless conclusions: “She’s not shaadi material”.

It can be said that this also applies to many British Asian women too. Most are marrying later and do not want to be ‘labelled’ in this way.

With #NotShaadiMaterial, Indian women across the country now challenge these old-fashioned views of how they should behave or appear. Several celebrities have also joined Bani J by holding up their own signs, blasting how society still retains patriarchal assumptions.

Author Anamika Mishra tweeted an image of herself holding up a sign that read: “I take my own decisions and speak my mind, so am I #NotShaadiMaterial?” Youtuber Anisha Dixit and writer Ruchi Kokcha also shared messages with the hashtag.

I take my own decisions & speak my mind, so am I #NotShaadiMaterial ? pic.twitter.com/zMH1QSr8o6

Ricksters, I don't fit the image society looks for in a marriageable girl. So am I #NotShaadiMaterial ? Lemme know below! pic.twitter.com/YvrzBuvuxI

I am bold, speak my mind, do what I want to do, live my life acc to my will, respect my freedom and individuality to the core, wear acc to my mood, smoke, drink, party with friends… Acc to society I am #NotShaadiMaterial but not only I'm married, I live happily with my in-laws

In addition, Twitter users have created a series of mock adverts, slamming the requirements women have to meet for marriage.

They highlight how these requirements can contradict each other. For example, one of the mock adverts look for an architect, yet also wants a wife that would prioritise over family instead of their career.

They also reveal the extent of how Indian woman can face judgement from all aspects of their lives. From past relationships to weight to dress, they still face archaic judgement, despite the progression made in gender equality. 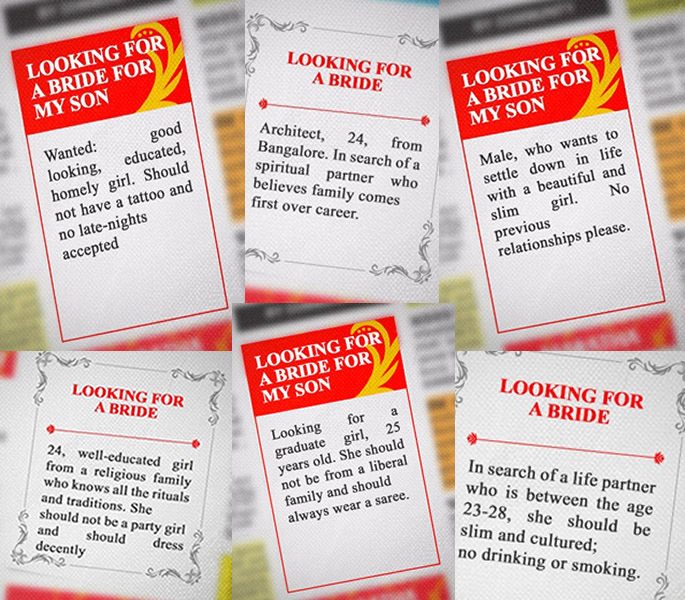 With this hashtag trending on social media, it highlights how Indian women have grown tired of whether they are suitable for marriage or not. While these stereotypical requirements feel outdated, but they carry a risk for South Asian marriages.

Indian men may have an old-fashioned idea of how their wife should act and behave. Therefore, if a husband learns that his wife won’t meet his demands, their marriage could end up in divorce.

On the other hand, women may grow frustrated when their husbands expect so much of them. To cook and clean, look after the family instead of pursuing a job; the modern-day Indan woman wants more out of life than this. This then could also lead to clashes in a marriage resulting in divorce.

It seems the concept has now being challenged head-on, at least by Indian women. With this trending hashtag, perhaps Indian society may take a step back and reflect on what modern women want from life.

However, regardless of whether many take heed, it has sparked an interesting discussion. One that shows the long journey, especially Indian women face, to achieve true gender equality.