20 Best Indian Dramas of All Time To Watch

From the nascent stage in the 1980s to the many choices of the 2000s, there have been several riveting Indian dramas. DESIblitz highlights 20 of the best.

“I had a chance to live that life, a very small part of it"

Indian dramas are some of the most popular shows on the smaller screen. People in India and South Asian communities around the world enjoy these dramas which come in the form of soaps, series and serials.

Going back in time there were literally no or a very few televisions sets in India during the late 70s and early 80s.

They started becoming a part of Indian households by the mid-80s. Even then state broadcaster Doordarshan (DD) was the only channel broadcasting from India

But then India became liberalised in 1992. With the advent of satellite technology, the television market began opening up to the world. There was a massive demand for South Asian content globally.

Zee TV was one of the first to make its mark on Indian TV. Slowly, others like Star Plus joined in and carved their own space.

Within a period of ten years, the Indian TV space had assumed gigantic proportions.

Let’s take a closer look at the 20 best Indian dramas of all time. Some of these dramas have played long innings on Indian television. 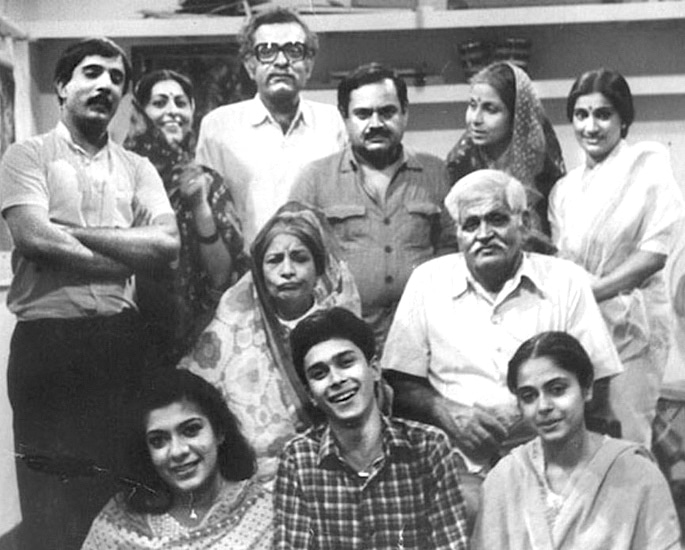 The entire 154 episodes of this popular serial were shown on DD. Hum Log (Us People) was the first soap opera on Indian TV.

Hum Log told the story about the aspirations and struggles of a middle-class Indian family from the 1980s.

The entertainment-education concept of the serial was based on the 1975 Mexican TV series Ven Conmigo. 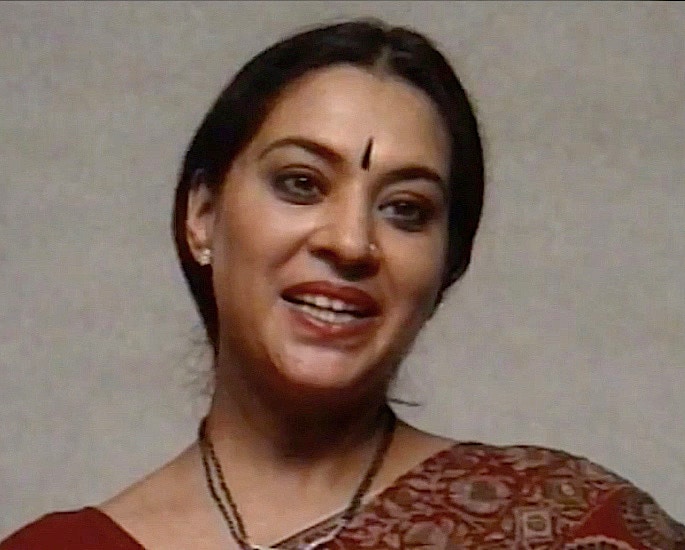 Directed by Karan Razdan, this drama series featured one woman’s fight against lax and corruption in government offices.

The late Priya Tendulkar (1954-2002) essayed the role of Rajani and the serial made her a household name.

Subhash Ghai and Shah Rukh Khan had cameo appearances in 2 episodes, playing themselves. DD National was the broadcaster for this TV series. Nukkad (Street Corner) was one of the first Indian TV dramas that became immensely popular on DD National.

Speaking about the characters Mirza says: “The 26 characters [in the show] were really the dregs of society.”

Naya Nukkad (New Street Corner), a sequel to this went on air in 1993. Buniyaad (Foundation) is a family drama revolving around the lives of Master Haveli Ram and his family, during and after the partition of India.

Amit Khanna, the Executive Producer of Buniyaad  writing for The Wire, summing up the drama expresses:

“Ramesh and his team captured the agony and ecstasy of independence and the social conflict of two generations.”

The drama had a total of 105 episodes that aired on DD National. The TV series was re-telecast on Sahara One and DD Metro.

The drama became a big hit in both India and Pakistan when it first went on air. 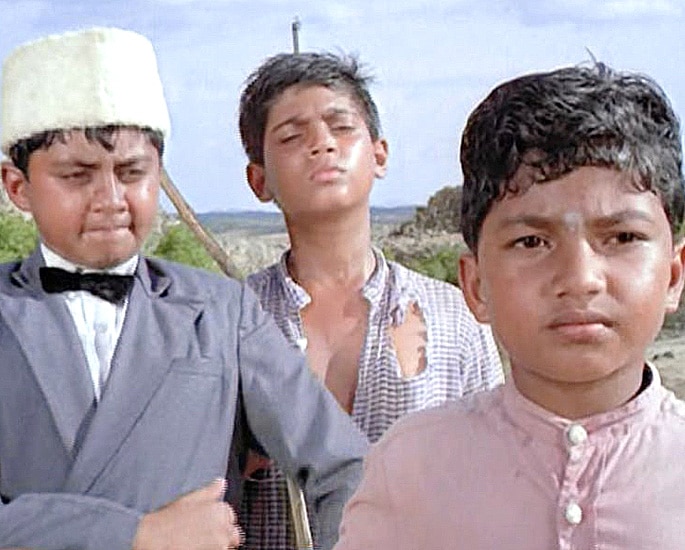 This Indian TV drama series was based on the short stories of R.K. Narayan from his book Malgudi Days.

It tells the childhood story of Swami and his pals from a small village in south India.

It was the first telecast on DD National and is now available on Hotstar India. 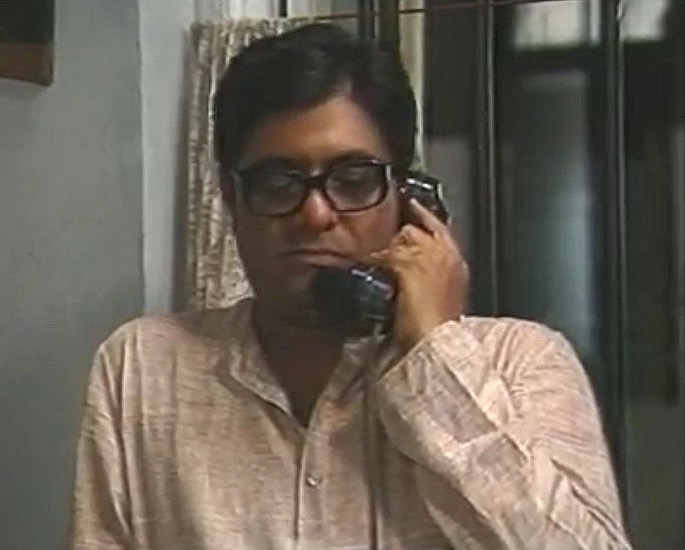 Wagle Ki Duniya is a sitcom drama that is about the life of sales clerk Srinivas Wagle, played by Anjan Srivastava.

The series was based on the Common Man cartoon character created by RK. Laxman.

Kundan Shah of Jaane Bhi Do Yaaro (1981) fame directed the TV drama. Bharati Achrekar (Radhika Wagle) had a prominent role as the wife of the main lead.

Prior to making his big TV debut in Fauji (1989), Bollywood Badshah Shahrukh Khan came on this drama as a guest actor.

The series aired on DD National over two seasons. 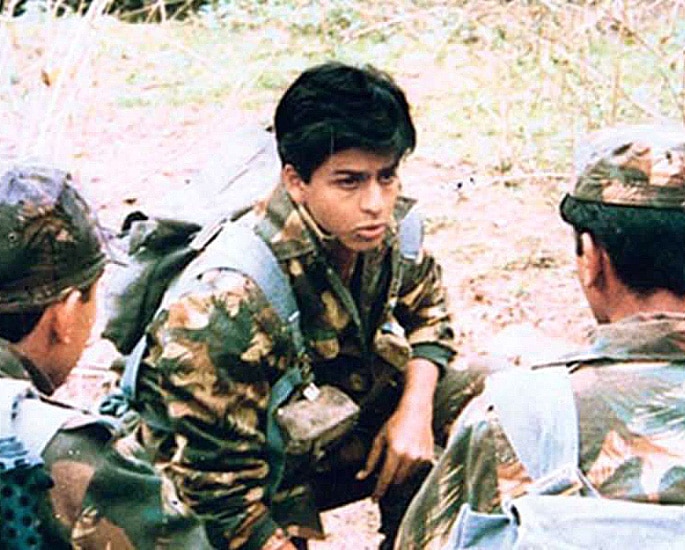 The serial portrayed the lives of army commandos, their punishments, pranks and much more in army training school.

Having the opportunity to play the role of an army man, Shah Rukh mentions:

“I still admire and follow the life of a soldier.”

“I had a chance to live that life, a very small part of it, when I was in the television serial as Abhimanyu Rai in Fauji.”

All 13 episodes of this popular TV series aired on DD National. 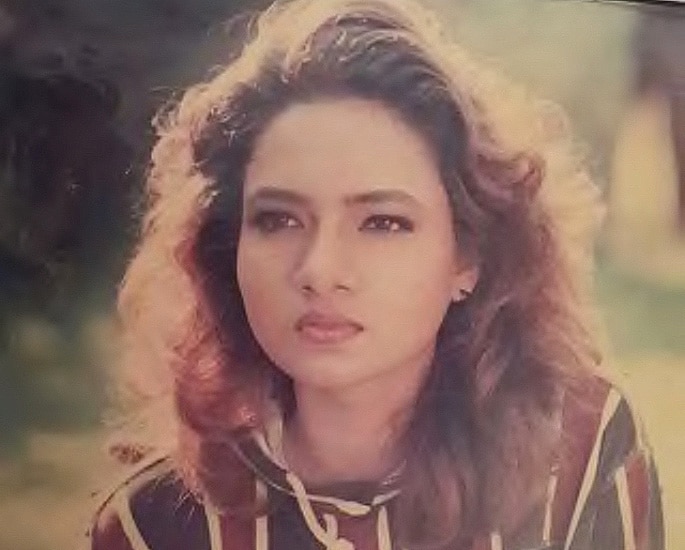 Tara is the first TV series to highlight a story about the modern Indian urban woman.

Telecast on Zee TV, this is also the first Indian soap opera that stayed on the air for five years.

The story focuses on the main character Tara, essayed by Navneet Nishan, and the different ups and downs in her life.

Alok Nath (Deepak Seth) plays the male lead in the serial. In 2018, writer Vinta Nanda accused Nath of sexual harassment during the making of Tara as part of the #MeToo movement. In 1994, DD National was the first broadcaster to show Indian TV Series, Shanti. Moving to Star Plus, the series had a total of 780 episodes.

This serial gave her a launching pad as she later featured in the all-time classic, Dilwale Dulhania Le Jayenge (1995). 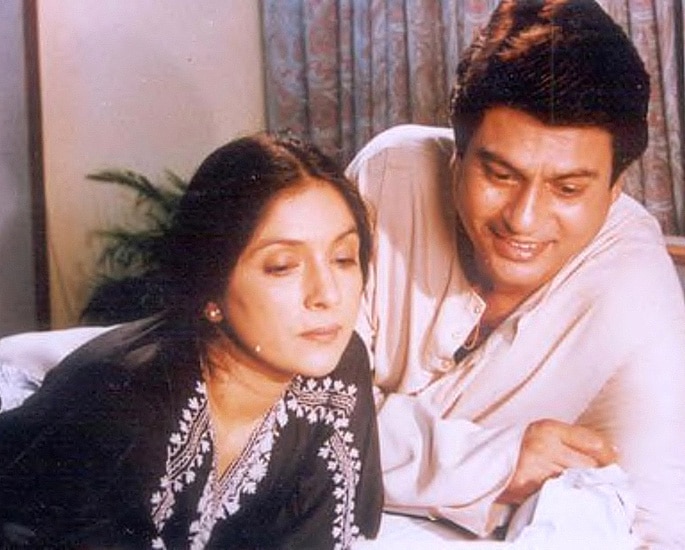 Saans (Breath) is a popular hit Indian TV drama from the late nineties. The 179 episodes of the series were telecast on Star Plus.

The story is of an inadvertent love triangle between the leads Neena Gupta (Priya Kapoor), Kanwaljeet Singh (Gautam Kapoor) and Kavita Kapoor (Manisha).

The drama won many awards, including the ‘Best Director’ award for writer Neena Gupta at the 1998 Kalakar Awards.

Praising the cast and the impact it had, Gupta told Hindustan Times:

“I was fortunate to have a good team and the perfect cast. In fact, there was competition on who arrived on the sets before me.

“We would get many letters from women and men who asked for advice, and gave some too.” 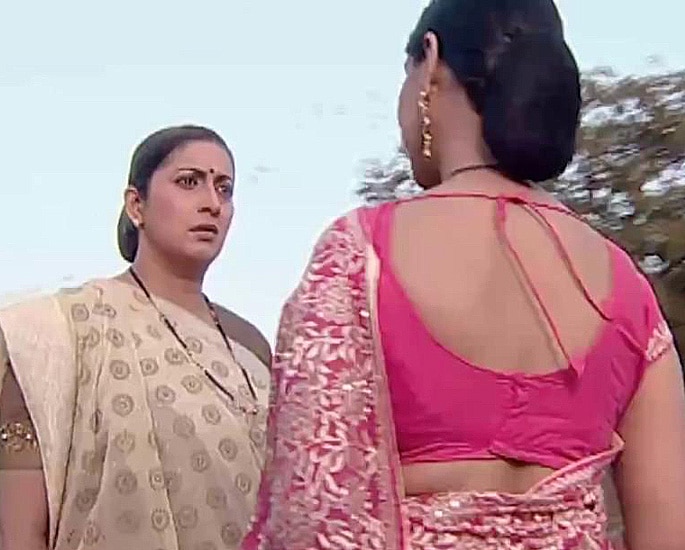 Kyunki Saas Bhi Kabhi Bahu Thi (Because a mother-in-law was once a daughter-in-law, too) is an Indian soap opera that made all those involved into overnight stars.

Over an 8 year period, it remained the number one show on TV in India and was also popular overseas.

The drama tells the story of a Gujarati joint family living in Mumbai. Smriti Irani played the main lead as the bahu, Tulsi Mihir Virani.

Familiar as KSBKBT, this became the first massive hit for famous producer and daughter of Jeetendra. Ekta Kapoor

Winning many awards, the show had a mammoth total of 1,833 episodes that were telecast on Star Plus. 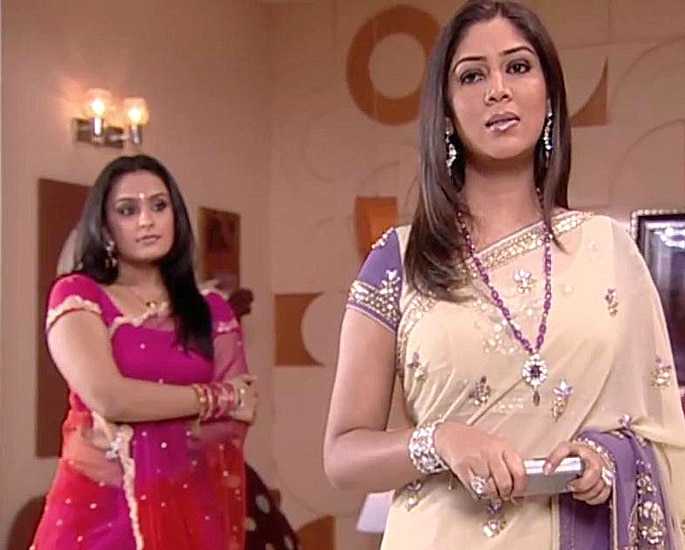 Kahaani Ghar Ghar Kii (The Story of Each House) is another popular production from Ekta Kapoor’s Balaji Telefilms.

Hindi is the original language for the soap opera. But the show has been translated for different markets.

Similair to KSBKBT, Kahaani Ghar Ghar Kii had a long run on Star Plus. Jassi Jaissi Koi Nahin (There is no one like Jassi) is an Indian soap opera, which saw the birth of another female star in Mona Singh. It was based on Colombian TV drama Yo soy Betty, la fea (1999-2001).

As in the original, Mona plays the role of a plain looking girl. She gets a dream job, falls in love, but faces constant difficulties in life.

All 548 episodes were directed by Tony Singh and were telecast on Sony Entertainment Television (SET) India.

A user on Google finds the drama unique, as she writes: Baa Bahoo Aur Baby is a comedy-drama that features the life and everyday problems of a joint family headed by matriarch Godavariben Thakker (Sarita Joshi).

The Thakker family comprises of six sons, two daughters, along with their respective partners and children.

The drama originally aired on Star Plus. All 558 episodes can now be watched on Hotstar India. 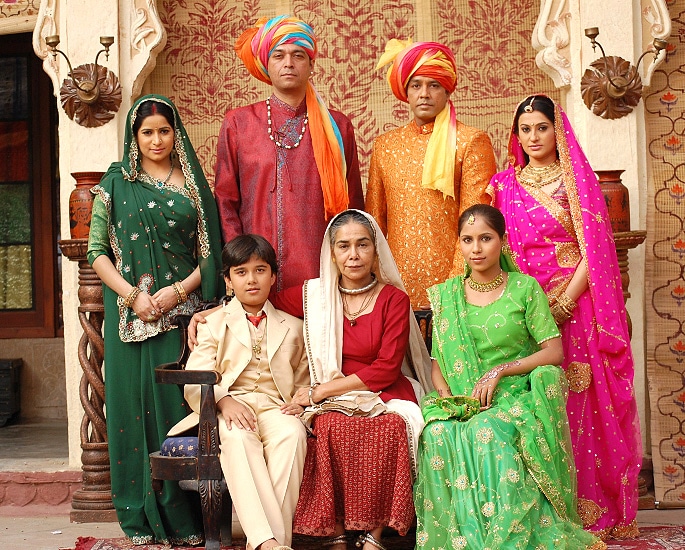 The serial traces the life of the child bride into adulthood.

The lead actress literally grew up on television. The show which aired on Colors TV had 2 seasons and a total of 2,245 episodes.

Balika Vadhu was telecast in numerous countries around the world, including South Africa and Japan.

Gor won the ‘Best Child Artist’ award for her role at the 2009 Indian Television Academy Awards. Yeh Rishta Kya Kehlata Hai (What is this relationship called?) is one of the longest running Indian dramas of all time. Since January 2009 the television drama is still being telecast on Star Plus.

The show is about a traditional arranged marriage between the main leads and how they find love, personal identities during the course of their married lives.

The drama also telecasts on Star Utsav in Urdu. It is one of the most popular shows in Pakistan. The story is about the accidental discovery of love by the main leads after they get married. Over four years, it aired on SET India.

The soap opera has received many accolades, including the 2012 ‘Dadasaheb Phalke Academy Award’ for both lead actors. Diya Aur Baati Hum (You are the lamp and I am the wick) is popular soap opera that told the story of a determined woman Sandhya, played by Deepika Singh, and her struggles to break boundaries to become an IPS officer.

The serial had a number one rating in the charts for over 1000 episodes and remains one of the most popular TV dramas ever in South Asia. 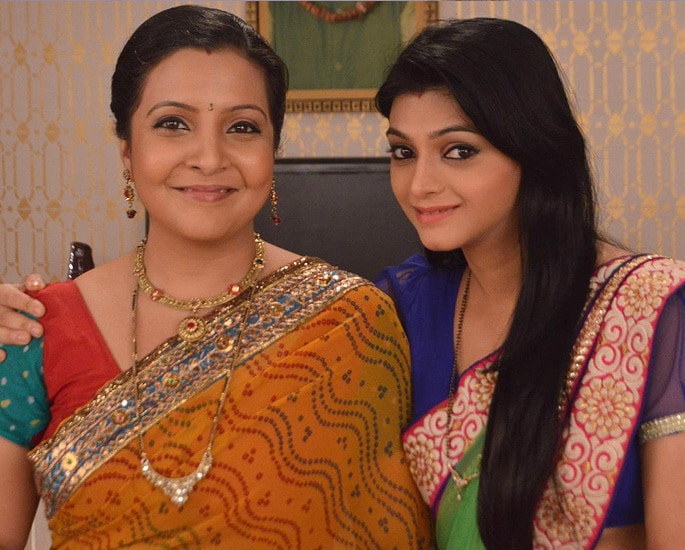 Sasural Simar Ka (Simar’s In-Laws) is an Indian soap opera,  tells the story about the marriage of two sisters to two brothers from a reputed family and how they fight to protect it.

The drama has been adapted in varied regional languages as well as by other countries like Thailand, Bulgaria, and Vietnam.

The drama aired on Colors TV for seven years and across three seasons, including 2063 episodes. 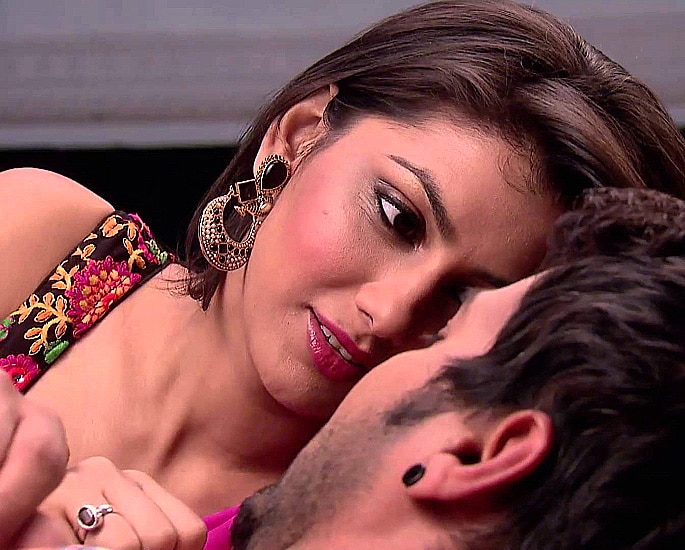 KumKum Bhagya (Vermilion In My Fate) is a soap opera about the lives of two sisters with different personalities. The drama also sheds light on their struggles, aspirations, dreams and hopes.

The first episode aired in 2014 on Zee TV and it continues to air across millions of homes around the world.

KumKum Bhagya ends our list on the 20 best Indian dramas of all time.

Other massively popular Indian dramas that also deserve a mention include BR Chopra’s Mahabharat (1988-1990: DD National) and Iss Pyaar Ko Kya Naam Doon? (What name shall I give this love?).

Smriti is a Bollywood bee. She loves travelling and dissecting movies. According to her," Success is a two-step process – the first step is to decide, and the second one is to act on that decision."