Star Network brought together some of the biggest names from Indian drama; music and comedy to perform live on stage at the LG Arena. Artists from the small screen [Star Plus], music directors Salim-Sulaiman and stand up comedian Sudesh Lehri enthralled their fans with a fine show of music, dance and laughter.

In 2011, India’s number 1 entertainment network, Star hosted a similar parivaar [family] event, which was acknowledged by audiences and the TV industry.

The inaugural event was held at the Wembley Stadium in London, whilst Birmingham was chosen to host the extravagant show in 2012. Star UK and Europe Senior Vice President Yeshpal Sharma said:

“Following the phenomenal response to Star Parivaar Live last year, we have decided to bring it back to the UK and this time take it to Birmingham. I am sure our audiences will be delighted with the fantastic talent line-up which includes Arnav & Khushi from ‘Iss Pyar Ko Kya Naam Do’, Suraj & Sandhya from ‘Diya Aur Baati’, Kokilaben from ‘Saathiya’, Pratigya from ‘Pratigya’ amongst others.” 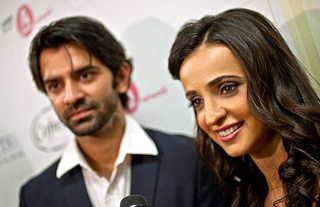 The timing of this event coincided with the news that Barun Sobti had quit the romantic drama ‘Iss Pyar Ko Kya Naam Doon,’ to spend more time with his family and concentrate on his filmy career. Following his exit from the drama, Star Plus received numerous complaints from their large international fan base, concerning his departure from the soap.

Subsequently the drama, which had been running from 6th June 2011, finally came to an end on 30th November 2012. Barun played the character of Arnav Singh Raizada, the once angry young man who turned into a caring loving husband.

The spectacular line up of stars arrived in London on an Air India flight, before heading to Birmingham, making final preparations for this vibrant and spectacular event. All the artists were very relaxed during their UK trip, as they were sharing a family like bond. Like with any other event, rehearsals for the Star Parivaar show were in full swing, as the artists were aiming to showcase an unforgettable concert. 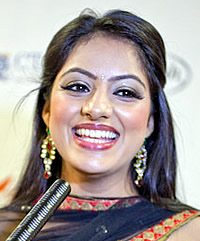 A VIP dinner was held at a hotel in Birmingham on 24th November allowing hard-core fans to wine, dine and mingle with their favourite stars. Ever since Star Plus joined BARB, the channel has led the UK TV viewership figures from an ethnic media context.

Thus it was a nice gesture on behalf of Star to give their most avid fans the opportunity to meet their role models. Some of the fans travelled to the show from places as far as Newcastle upon Tyne. The South Asian community  attended the show in big groups, consisting of elders, middle aged and the youth.

On 25th November 2012, around 8,000 people witnessed their favourite soap stars from Star Plus performing live on stage. The bubbly Rupal Patel [Kokila Parag Modi] who plays a strict mothers role in the Saas Bahu Saga, ‘Saath Nibhana Sathiya’ won everyone’s heart by being the perfect host. The other celebrities set the stage alight with some superb performances.

The beautiful Sanaya Irani was first on stage as she performed a dance to the song ‘Night Ki Naughty Kahani Ye Halkat Jawani’ from the film Heroine [2012]. Sanaya is widely known as Khushi Kumari Gupta who portrayed the bubbly and happy wife of Arnav Singh Raizada [Barun Sobti] in the soap ‘Iss Pyar Ko Kya Naam Doon.’

There was a big cheer from the crowd as Arnav made his way onto the stage surrounded by a team of bodyguards. He gave a big hug to his co-star Sanaya as the fans saw the hottest jodi from Star Plus on stage.

Arnav delighted his many fans when he performed the Gangnam Style, adding his own traditional tadka form to it. His horse riding Gangnam performance was widely appreciated by his fans. Some referred to it as very cute and innocent.

For all our audiences, including our overseas viewers, we present an exclusive video of your favourite stars performing under one roof at the Star Parivaar Live 2012: 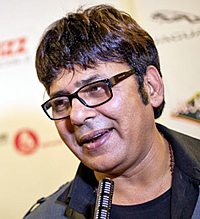 On stage, Sudesh Lehri was a major hit, who not only hosted the show briefly but also had the Birmingham audience giggling at his hilarious jokes and stand up comedy. In 2011, Sudesh acted in the Bollywood film Ready, which featured Salman Khan in the main lead.

Backstage, DESIblitz had the privilege to interview the stars inside the press room, courtesy of a well-organised management team from the Star Network. When we questioned Barun [Arnav] on choosing films ahead of soaps, he surprisingly dismissed this and said: “As of now I am looking forward to a vacation.”

Barun has completed the shooting of his first Bollywood movie Main Aur Mr Right. This is a romantic comedy, which also features the music of Bappi Lahiri. The film will release towards the end of March or early April 2013.

Anas Rashid [Suraj], Deepika Singh [Sandhya] and Pooja Gaur [Pratigya] graced the stage for some more enlivening performances. The stars danced to golden hits from the 80s, including tunes from the films Mr. India [1987] and Chandni [1989]. The fantastic pair of Suraj and Sandhya performed together on the track ‘Chandni Oh Meri Chandni’. 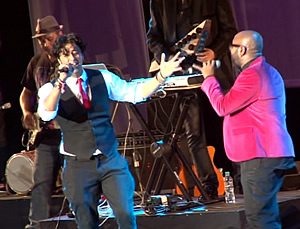 The beautiful Pooja shook her legs and arms to the song ‘Mein Heroine Hoon.’ Finally all the Star Plus cast came onto the stage to perform a butterfly style move, dedicating it to the whole parivaar.

In the 2nd half of the show, audiences experienced some mesmerising music from Salim-Sulaiman. The dynamic duo have composed several hits songs in films like Chak De India [2007], Rab Ne Bana Di Jodi [2008] and Kites [2010]. The show, which ended with their melody “Ainvayi Ainvayi,” received a standing ovation from the audience.

“With Star fast becoming the No.1 Asian entertainment choice globally, initiatives such as this offer the Asian diaspora an exciting opportunity to meet the top soap stars up close and personal and watch live performances from the top performing shows on Star Plus. Star Parivaar Live 2012 has once again raised the bar in Asian entertainment.”

There is no doubt that this was a very memorable event. Everyone will be looking forward to future events of this kind.

Faisal has creative experience in the fusion of media and communication and research which increase awareness of global issues in post-conflict, emerging and democratic societies. His life motto is: "persevere, for success is near..."
Tribute to Sitar Maestro Ravi Shankar
Lata Mangeshkar launches her own Music Label