Clothes Show Live celebrated their 25th anniversary with another successful year of top fashion, famous faces and a packed out arena. DESIblitz has all the highlights from the 5 day extravaganza.

For their 25th anniversary, Clothes Show Live 2013 wowed audiences with their most theatrical runway show yet, including professional dancers and performers to serenade between scene changes.

Shown throughout the day, the runway featured A-list celebrities who gave away goody bags to lucky members of the audience.

120,000 people turned out over the 5 days to view over 450 well-known brands and designer labels.

The atmosphere of the day was full of glee; from start to finish, the NEC in Birmingham was filled with fashion lovers all wanting to purchase some bargains and meet the celebrities and reality stars who attended. 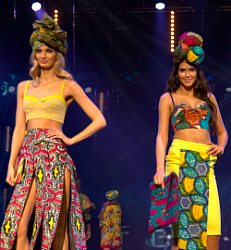 Some of the famous faces that appeared over the course of the event were Made in Chelsea’s Proudlock, Jamie Laing and Andy Jordan, who all had stalls in the fashion hall.

Others included TOWIE’s (The Only Way is Essex) Gemma Collins, and the loveable Peter Andre and Mark Wright.

Henry Holland and Becca Dudley hosted the main show which included 8 different scene changes all based on the idea of ‘A Weekend in the Country’.

Inspired by Cliveden House, all 8 scenes featured casual and formal wear for both men and women; with clothes from top brands such as Lipsy, River Island, Ted Baker, American Apparel and many more.

Each day, different performers graced the stage of the catwalk to hype up the audience before the show began. Stooshe opened up the first day with a killer performance, X Factor contestants Kingsland performed on Saturday and the popular boy band Union J on Sunday.

High street met designer this year with expensive ensembles paired with high street accessories to make for more affordable outfits. The likes of Primark and H&M made an appearance on the catwalk showcasing beautiful statement necklaces and printed trousers.

This year we are crazy about tartan, from trousers to scarves, having a red tartan piece can spruce up any outfit by adding a dash of strong color and print.

Classy and comfortable was the motif for this show; with soft chiffon materials, velvet suits and fur collars, a touch of class was always present.

With the festive season here, Clothes Show Live dedicated 4 scenes to party wear. ‘Gatsby Gold’ shone on stage with gold sparkling jumpsuits paired with a statement headpiece. For men, long printed blazers are in this season with velvet collars to add a touch of elegance to a bold blazer.

The fashion show this year was overall theatrical, with beautiful models showcasing some amazing outfits.

As well as all the known brands and designers strutting their stuff, local Fashion students were also given the opportunity to show-off their talents.

Rebecca Ryder-Caddy, a Lecturer in Fashion and Product Development from University of Coventry said: “The collection that we selected to show today includes most of our new technology that we’re really proud of.” 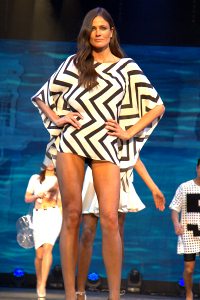 She also noted that many students enjoyed incorporating their cultural heritage into their designs, thus catering for a truly multicultural audience.

“It’s very difficult to find clothing whereby East meets West, so I tend to stick to dressing Western. But it’s become more difficult now I’m married as styles such as crop tops or low cut things, I can’t wear as much.”

Nish Parmer, 20 from Workingham, believes you can find a balance between both Eastern and Western by adapting old-fashioned pieces but making them a little edgy: “I wear anything, especially if it’s old fashioned but I like to make it a little edgy.”

The lack of Asian men who are enthusiastic about fashion became apparent during the course of the 5 days. However, Rumon Shay, 20, who was an exhibitor at the show said:

“Men tend to wear anything and not care so much like women, especially Asian men because they might be a bit more scared to try something bold.”

Mini catwalks also took place throughout the day on stages set up around the venue. Including a fashion show with young potential models all showing their finest walks for a modeling agency to rate.

Overall, each day provided something different with the chance to meet celebrities and win great goody bags and prizes. Show director for the Clothes Show, Maryam Hamizadeh said:

“This year has seen another really successful Clothes Show Live event. For our 25th anniversary we wanted to create a celebration of all things fashion and beauty and I think we have achieved just that.

“Clothes Show Live continues to surprise and delight visitors, retaining its rightful title of Europe’s largest fashion and beauty event. Here’s to the next 25 years.”

The fashion show was the most memorable of previous years due to its theatrical brilliance and its ability to cater to every dress sense, whether that is causal or full of glitzy glamour. Clothes Show Live has definitely been going from strength to strength and there is no telling how it will dazzle us next year.