The Angels of Fashion Show 2013 Highlights

Part of London Fashion Week, The Angels of Fashion show in its first year has been a huge success in welcoming and providing a platform for some of the biggest up and coming talent not only from Britain but from around the world.

“It’s been such a terrific event. The audience, we were packed out, people were standing up. I’ve just had so much fun!”

Alongside London Fashion Week (LFW), the inaugural Angels of Fashion show held on September 14, 2013, was a resounding success.

These fashion-loving angels descended upon London to give British audiences a taste of some of the biggest up and coming international designers and their fabulous collections.

Whilst New York is known for commerciality, Milan for opulence and Paris for the tailored – LFW proved that none of these cities have anything on the class and style of London.

As official media partner, The Angels of Fashion Show was very close to DESIblitz’s heart. Founded by the lovely Lady K, the show took place at opulent Hilton London Paddington. 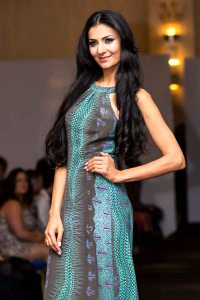 Split into a matinee and evening show, the entire event displayed a wide variety of diverse and talented designers, models and entertainers.

VIP guests and attendees were from a variety of backgrounds. Notably, model and designer Danish Wakeel; designer Manpreet Singh; and Arslan Baig from the Rishi Rich Project were all spotted enjoying the show.

Speaking about the importance of the show, Lady K says: “I wanted to promote brand new designers from around the world. So I’ve got designers from Dubai, Spain, Poland, Ireland that have flown in. As well as best of up and coming British designers as well, and to give them a platform.”

The event was also in support of the Princes Trust, a charity that supports 13-30 year olds in struggling situations and provides them with the opportunity to better themselves and to learn new skills.

Lewis-Duncan Weedon, the Prince’s Trust celebrity ambassador and a well-known London fashion icon explains why The Angels of Fashion show was so significant:

“The fact that we have the Trust involved, to me that’s so special. The Angels [of Fashion] has been a long time coming. This is a way of new designers really getting involved, so it’s fantastic.”

The show was hosted by popular presenter Ricky Taylor. Ricky’s work with Pakistan Fashion Week over previous years has almost made him an expert in all things multicultural. Describing the buzzing atmosphere of The Angels of Fashion, Ricky said:

“It’s been such a terrific event. The audience, we were packed out, and people were standing up. I’ve just had so much fun!”

Reena, professional hair and make-up artist was in charge of the beauty side of the show. Along with Sonia Kaur and Taniya Khan, the talented trio created all the amazing looks that were seen on the runway: 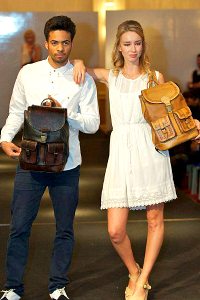 The entertainment included rising stars Mazey Banks and Do it Yaself, bellydancer Melisa Yavas, as well as magician Reuel Singh and Valentine who constituted greatly to the amazing atmosphere of the event.

It was their enthusiasm and truly great performances that broke down the barriers between the entertainers and the audience, which ultimately made the environment more enjoyable to watch.

DESIblitz also had exclusive interviews with Beara Beara and Sicalipis who made their LFW debut. Beara Beara displayed a natural leather bag collection that has been hand crafted by a handful of Bolivian artisans.

Beara Beara prides themselves about their morals and philosophies about good work practices, by helping to tackle the lack of employment in Bolivia. Jake Bullough, founder of Beara Beara states: “It’s a delicate balance between being ethical and working with family businesses, and making a business profitable at the same time. So it’s a collaboration between the two.” 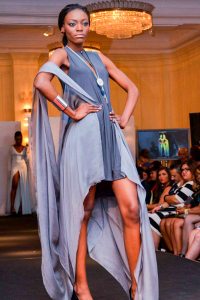 He explains: “It’s reminding people about what a Gentleman is. Bringing it back with a young, urban flavour. It’s not what everyone would think a gentleman is in a suit and tie.”

In addition, we saw the tasteful and elegant Albert Martincich whose collection was inspired by different composures of nature such as the air and sky. He told DESIblitz:

“I just decided that I wanted to study the sky and take inspiration from that, because in Britain, the weather is so unpredictable. I just wanted to put that into a collection; the way the sky can change from being really peaceful to being really stormy and dramatic.”

DESIblitz also met Marcus Niles, designer of FlyLander Couture, whose collection was inspired by urban and hip-hop culture. He tells us how he got involved in fashion: “I got into fashion because I was a bit disenfranchised with what was already out there. I don’t like wearing the same thing as everybody else. So I started customising and making little bits for myself.” 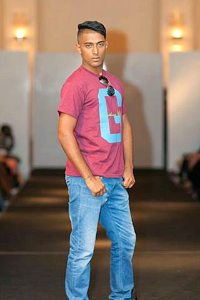 DESIblitz also interviewed the rising Boy Penda and Marimi. Speaking about his collection of Asian of Fashion, Theo aka Boy Penda, admits that his new designs were inspired by his Grandmother:

“I always do cocktail dresses. This is a bit classic and long, because my grandmother always loved that. That inspired me for this show and this collection.”

Milina, founder of Marimi says about her collection: “It is inspired by the tribal prints. It’s for the beach, and anyone who wants to feel sexy.”

The grand finale of YEN displayed an exclusive luxury collection that perfectly fitted LFW’s glamourous Hilton setting. International Brand Ambassador of YEN and representing the designer on the night, Lady K said: “His collection is bridal. It is something that you will never have seen before. The grand finale piece is jaw-dropping, it is absolutely stunning.”

The delicate bridal couture wear and the final piece of the collection was worn by international supermodel, Sanam Bokhari, who flew in especially from Norway for the occasion.

All in all, angels of fashion were truly floating in the heart of London on September 14. Each of the amazing designers from different parts of the world perfectly complimented each other and the night was a harmonious mix of beauty, glamour and gorgeous fashion. Congratulations Lady K, we cannot wait for The Angels of Fashion 2014!