Catapulting Pakistan into the high profile world of couture, glitz and glamour, Zaheer Abbas has done Pakistan proud. A popular name on Eastern runways, Zaheer has very big plans to continue with his enormous success.

"My design philosophy is simplicity. I always try to focus on simplicity."

There aren’t many Pakistani designers compared to the likes of Armani, yet baby-faced designer Zaheer Abbas has been graced with that particular honour. However, unlike many other designers this success hasn’t been something he’s always dreamed of.

Architecture was his choice of career, but he changed course when he realised maths was not his strong suit. He went on to research courses in fashion and obtained a scholarship to study at the ‘Asian Institute of Fashion Design’:

“I graduated in 2005, I have a degree in Fashion, from Iqra University which is in Pakistan. I launched my label in 2010.” 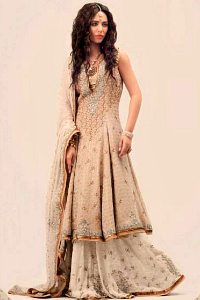 After graduating he immediately gained the opportunity of working with different fashion designers and also interned at various different television channels within their fashion departments.

During his intern years he recalled learning about ‘professionalism, punctuality and meeting deadlines’. He even managed to acquire skills in event management for more than 2 years before launching his first line.

Gaining a wide range of experience helped Abbas change his perceptions and helped him to design pieces for red carpet gowns and high profile events.

With a great array of contacts under his belt, he launched his collection with a mini fashion show featuring Pakistani supermodels in the form of Fauzia Maha, Amna Ilyas and Umaima Malik.

His hard work was quickly recognized by the Pakistan fashion industry and he was bestowed the elite honour of Best Emerging Talent at the Lux Style Awards as well as Eithad’s Most Inspiring Designer award.

For a young designer celebrated so warmly in Pakistan, achieving international acclaim was bound to be an easy feat. In 2010, he unveiled his collection for Pakistan Fashion Week 2 in London, and has even taken his work to the ramps of Paris and the USA.

He spoke exclusively to DESIblitz about his ‘Basic’ collection, which he showcased at Pakistan Fashion Week 4 in London on June 9, 2013 during the Grand Finale.

During the Gupshup, he mentions an emphasis on simplicity; an array of gorgeous pieces without embellishments and embroidery, yet mostly heavy in cuts:

“In ‘Basic’, you will see a lot of modern stuff, without any embellishment, without any embroidery. It’s just cut-orientated. It’s basic, but basic in a very modern way.”

“My design philosophy is simplicity. I always try to focus on simplicity. So this is a collection that I have been planning, and a label that I am launching tonight.”

His collection is dominant in both Eastern and Western attire and can easily be mixed and matched to cater to different fashionista needs.

However, the creative vision of his designs isn’t surprising as Zaheer has stayed true over the years to his signature philosophy of ‘simplicity’. It’s due to this simplicity were allowed to see the finest details of his work, from the cutting to the finishing process.

It’s no surprise then how Zaheer talks about the process involved in creating a collection – labelling it ‘tiring’ yet ‘creative’. He understands that extensive research and a genuine interest is required to bring his collection to life.

Zaheer is also patriotic in his designs and is quick to dispel common comparisons between the fashion of Pakistan and India. He points out a huge difference between colour palettes and shirt lengths, and also points out the delicate stitching and embroidery of Pakistani fashion.

All the reason in the world to gain bragging rights, he puts that aside as he radiates a humble self-confidence and labels his self-proclaimed sixth sense about the best things about himself which makes him particularly indispensable to his work. He is visually aware and sources inspiration from particular eras, art, books and movies.

Speaking about the experience of showcasing his pieces in London, Zaheer points out that it’s a completely different market. He’s always received positive feedback, especially now that he stocks in London.

Travelling abroad also allows him to observe different trends, which he can add to his upcoming collections.

Expanding his clientele is important in the forms of his audience and whilst he states that he prefers the ideal woman who wears his pieces to be simple and elegant, he doesn’t mind catering for different body types. In fact he loves offering a personal fashion counselling service telling clients what suits them and what doesn’t.

In an industry where freshness is sought every season, Zaheer mentions that the biggest challenge is inevitably for him to constantly reinvent and prove himself. He always feels the need to come out of his comfort zone, which he deems crucial to create a head-turning collection.

In August 2013, Zaheer launched his jaw-dropping Bridal collection during Bridal Couture Week. The collection saw long shirts paired with lehengas and churidaars to give a truly elegant and elongated look.

Future plans for the hard worker includes taking his collection to more destinations overseas and also to launch a menswear label called ‘Linear’.

Zaheer states that this is just the beginning for him and he has a long way to go. Here at DESIblitz we are sure to hear much more about this unstoppable force in the Pakistan fashion industry.

Jabeen is a journalist with an unrequited love for crime novels and paranormal documentaries. She's working towards her goal of becoming a presenter and lives by the motto of 'the greatest pleasure in life is doing what people say you cannot do.'

Photos from Bridal Couture Week by Faisal Farooqi at Dragonfly