Meet five of the most talented South Asian female rappers who are changing the music game with their hard lyrics and crazy flows.

"My versatility definitely originates from me being from Fiji Island"

There are numerous musicians from different backgrounds exploring new genres. South Asian female rappers are the fresh wave levelling up the music game.

Sometimes, South Asians going into this type of territory can draw attention due to this stereotype that they’re only good at Bhangra, Bollywood or some other Desi genre.

But, these artists aren’t just known because of their heritage, it’s their skill that does all the talking.

The South Asian female rappers listed dare to be different. They dare to add a new dimension to such a popular and much-loved art form.

What sets these musicians apart is their ability to rap, sing, flow and create a certain cadence that is refreshing.

Of course, their roots allow them to fuse in South Asian tones, melodies and even lyrics, which is even more impressive for the listener.

As these artists skyrocket within the industry, it’s only right to shine a light on their journey and playlist-worthy tracks. 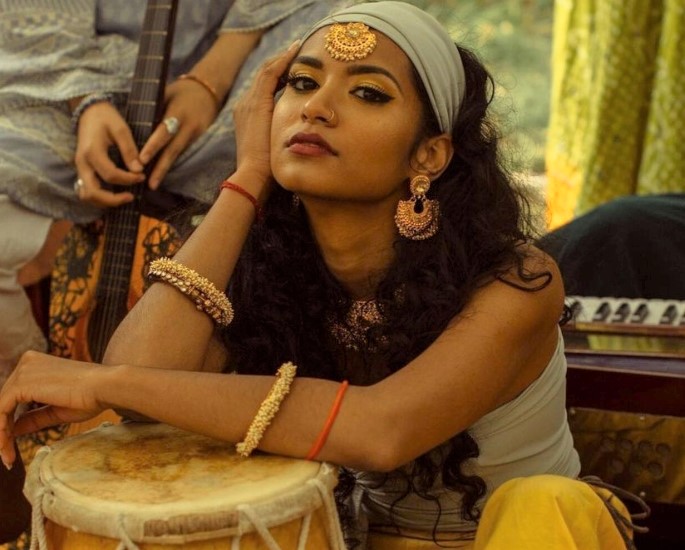 With both a strong Fiji and Indian background, Pallaví is making immense strides with her assertive raps.

Her name is a play on the 2011 movie Colombiana and her Indo-Fijian identity from which Pallaví draws numerous inspirations.

Speaking to The Fiji Times in 2019, the musician stated:

“It never felt quite right to say I’m Indian because when I did I felt it ignored my coolie/girmit ancestors’ struggles.

“I wanted to acknowledge those resilient people within my identity.”

This passion along with the star’s exposure to Hindi, RnB and rap music impact her in such a creative way.

She has such a liberating presence in her songs. Pallaví’s 2018 projects like ’80s Love Affair’ and ‘Insanity’ showed the type of potential she had.

But, it was the release of ‘Identity’ in 2019 that announced the formidable nature of the rapper.

The anthem spoke volumes about oppression, culture and embracing all your identities. Not to mention the blistering sound production.

It oozes with high-pitched keys and subtle bass but Pallaví’s brash delivery provides a head-bumping song.

This all culminated in her iconic debut album Thirst (2022). The project leaks with the artist’s unapologetic personality.

The jazzy twang of ‘Men With Money’, the bilingual lyrics of ‘Sanskari Hoe’ and the punchy production of ‘Stunt’ are magical.

She is not afraid to be sexual, spiritual or open, all the while challenging social tropes and appropriation.

Listen to the stylings of Pallaví aka Fijiana here. 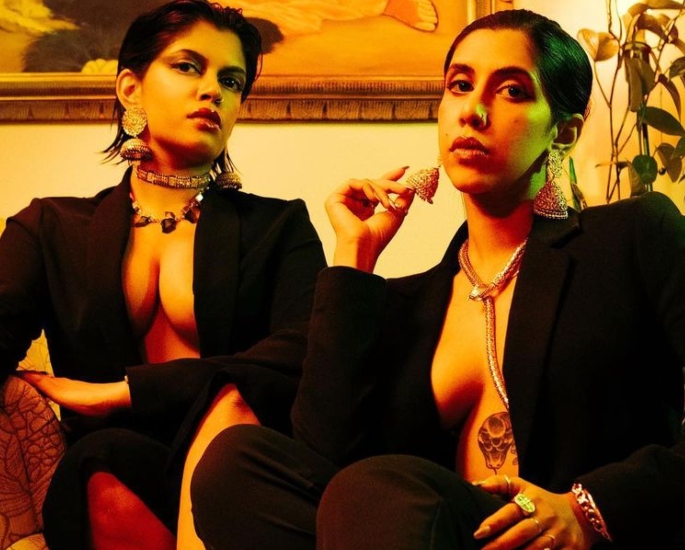 The South Asian female rappers were born in the Indian state of Tamil Nadu but were raised in Calgary, Canada.

They label their music as “goonda rap”. ‘Goonda’ is a South Asian term for ‘gangster’ but is also used stereotypically for someone who is rebellious.

This is what Cartel Madras’ music is. When talking about their music, the pair told Subpop:

“We are speaking to, and about, narratives that are not magnified in popular culture, while paying tribute to the subgenres that have continuously influenced our sound.

“That’s what we want goonda rap to become.”

Inspired by a wide range of vocal artists such as British Asian artist M.I.A. and American rapper Freddie Gibbs, their tracks are very much raw and in your face.

Their first EP Trapistan (2018) was covered with quick-witted punchlines.

Standing out were the songs ‘Housey’ and ‘Pork and Leek’ for their fusion of bass, psychedelic beats and pacey flows.

However, their second EP, Age of the Goonda (2019), called upon more cultural narratives.

Voicing their outlooks on the LGBTQ+ community, women of colour, immigrants and Desi’s, the star single has to be ‘Goonda Gold’.

It’s provocative and transparent, calling for women to rise. Not to mention the brilliant tabla and hip hop transition towards the end.

With a few hot singles in between, Cartel Madras released their third EP, The Serpent and The Tiger, in 2021.

The project emphasised how talented the pair are as they show off their legit rapping skills.

Drawing upon different pitches, their delivery of each song is vibrant and highlights how expansive their sound is.

Yes, they are mixing numerous sounds in every track but it doesn’t overwhelm the listener. Instead, it provides a thrilling experience.

Listen to more of their projects here. 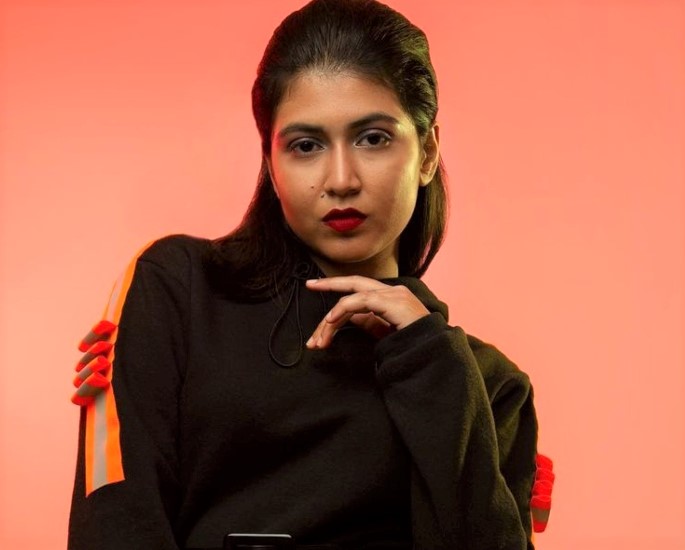 Self-proclaimed ‘dapper rapper’, Siri, is one of the few South Asian female rappers hailing and residing in India.

She started her pursuit of a music career in 2015 and has slowly lit up every stage she has performed on.

Coming up with lyrics is hard enough as a musician. However, Siri managed to do this and also rap in multiple languages.

She has graced songs in Kannada, Hindi, English and Telegu. But, the smooth transitions between these are where the true artistry lies.

Her numerous collaborations with the creative music producer, Sez On The Beat, is a recipe for success for the superstar.

Linking up for blazing songs like ‘Gold’ (2019) and ‘My Jam’ (2020) show just how seamlessly Siri’s voice and Sez’s compositions blend. The latter has even achieved over 1.7 million YouTube views.

Siri possesses such a distinct hip hop tone and clear vocals when she raps that you can hear every word she pronounces.

Her word manipulation and voice changes grips the ears and direct you towards her feelings.

Mix in the metaphors and aggressive nature which Siri raps in and you have an emerging talent who is trying to reach the top.

In 2021, the artist shocked fans with a new release, ‘Sante’. However, what was more surprising was the sound.

The musician went for a more pop-inspired song with a futuristic dance vibe that echoed inspiration from megastar, The Weeknd.

Siri also boasted her singing capabilities with a catchy chorus and infectious harmony.

But, in true fashion, she rewards her avid listeners with multilingual verses, impressive melodies and playfulness that mimics Nicki Minaj. This is one artist you don’t want to miss.

Have a listen and watch some of Siri’s self-directed music videos here. 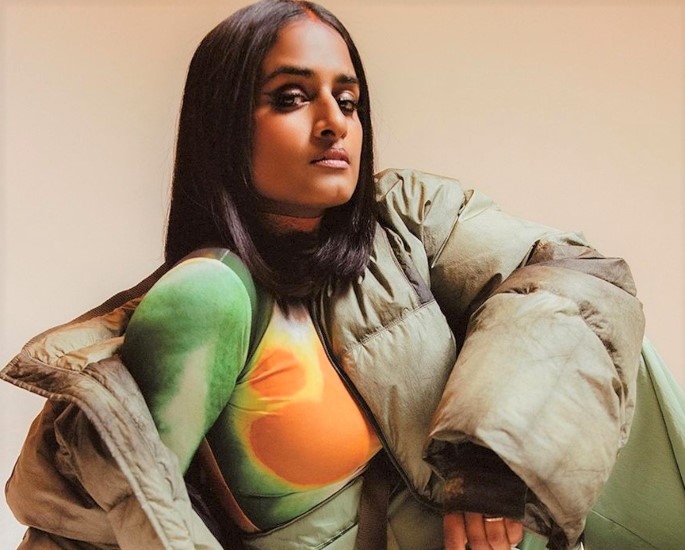 Emerging as one of the most sought-after South Asian musicians is Priya Ragu.

Whilst the artist is not an out-and-out rapper, she has the gift to dabble in all music forms. Her singing normally takes the limelight but her raps are equally impressive.

The Swiss-Sri Lankan star has carved a sound entirely her own since the early jam sessions she had with the local Tamil community as a child.

Drawing influence from the silky blends of RnB musicians Summer Walker and Kehlani, Priya’s music is a fusion-filled celebration of heritage.

Her breakout single ‘Good Love 2.0’ (2020) provided uplifting energy and a surge of empowerment that the artist brings to every project.

The project highlighted the teamwork between Priya and her brother/producer Japhna Gold.

It was Japhna who swayed the artist to incorporate Tamil influences into her songs and the EP does this beautifully.

The bold 10-track collection is rich and warm, presenting Priya’s graceful vocals.  One of the most iconic songs is ‘Chicken Lemon Rice’.

It’s here where we hear how assertive Priya can rap but balances this out with her warm melodies.

The deep tabla beats, shuffling synths and Tamil folk dramatics are so vibrant, similar to a Kollywood movie.

She’s also consistent in a type of ‘singing rap’ on the EP which is not entirely hip hop but not completely RnB.

But, Priya didn’t stop there. In 2022, she released ‘Illuminous’ which is a brash declaration of her intent to stay on top.

Her sound is Billie Eilish, M.I.A., Stevie Wonder, Mos Def and Common rolled into one with a modern blend of experimental sounds.

This was backed up by BBC Sound of 2022 who shortlisted the star as a tingling breakthrough.

Likewise, her headline shows in London and summer festival schedule emphasise how in-demand Priya is.

It’s rare that South Asian women reach the top of mainstream music. Her Tamil counterpart, M.I.A. is one exception but Priya’s individualism will rewrite the record books.

Check out more of her work here. 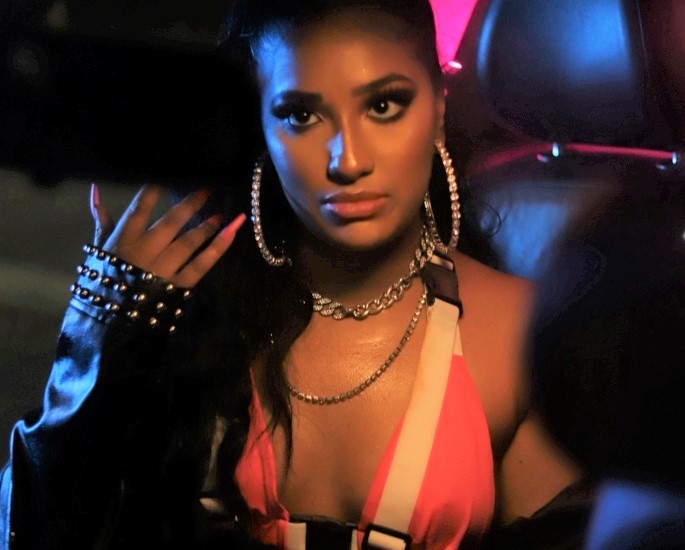 This iconic British genre is one of the most popular forms of music that has taken over the world from New York to Italy.

It’s gritty, raw, aggressive but also creatively demanding. But, that’s not stopping the fruitful Supriya, who is accepting this challenge head-on.

Whilst the majority of her records have showcased the artists singing qualities, her 2021 track ‘No Lie’ shocked listeners with this new style of delivery.

It was unapologetic and drenched with hard-hitting lyrics.

Her rap flows remind one of Digga D but then the melody switch up for the chorus takes inspiration from D Block Europe and grime legends N-Dubz.

“My versatility definitely originates from me being from Fiji Island.

“Being known as an island girl is always a flex which I combine with my hood vibes being in West London.”

The musician has admitted that ‘No Lie’ was the start of her transition into drill music and this has excited music fans across the nation.

Her vocals are impressive enough but the ability she has to be so brash and confident in her raps is impeccable.

She has fun on the track and keeping up with her socials, the rapper is consistently working on something new.

She’s already linked up with the likes of grime icon C Biz and performed in Bradford alongside British Asian rappers JJ Esko and PakMan.

Supriya has also worked with the songwriters of British singer, Mabel, who have provided her with limitless knowledge about the industry and creative processes.

The young musician is just getting started. It’s exciting to see what cultural impact her presence will make within drill music.

Likewise, just to see a South Asian female rapper exceeding in this genre is mindblowing yet trailblazing.

Listen to her hard raps here.

Their dedication and relentless work ethic have not only worked in their favour but have forced the competition to raise their game.

These musicians are fresh, creative and unique. They bring a new catalogue of skills whilst showing off traditional aspects of rapping.

The most exciting thing is these musicians are just getting started.

So, have a listen and feast upon the artistic qualities of each individual and their head-nodding projects.