The Clothes Show 2012 returned back to Birmingham for a 5-day spectacular display if amazing fashion, following a brief move to London.

"whatever your style is, feel good in what you wear"

The Clothes Show 2012 was held at the National Exhibition Centre in Birmingham from 7th-11th December.

There was a major line up of music acts and fashion celebrities who attended this event. The main catwalk show consisted of the most talented models in the UK from leading agency Models1.

On the weekend, the turn out was high as many youngsters and families arrived early to maximise their day. The Clothes Show Live is always popular with the younger crowds as it has so much to offer.

This varies from the beauty advice stalls to the latest fashion outfits at the boutiques. Makeup artists were on hand giving tips and advising on latest products and colour trends. Members of the public were encouraged to buy designer shirts, giving them an opportunity to stand side by side their favourite stars.

The Suzuki Fashion Theatre headlined the catwalk show, hosted by stylist/television presenter Grace Woodward and top fashion designer Henry Holland. The show had various subjects to it, cleverly portrayed in the look demonstrated on the catwalk.

The catwalk look had a very oriental eastern feel to it; this included the long cardigans and fitted trousers.

Fashion trends for 2013 are a very much eastern in style. This was further highlighted by the long flowing tops, cardigans and tighter trousers. 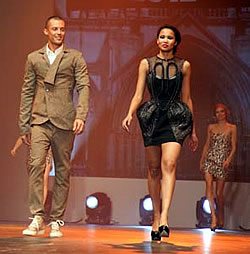 Other trends to look out for next year include feminine style long tops for men with low cuts. For the women, very long dresses and very short sexy skirts are in. The catwalk also showcased lingerie and underwear items with the male models walking down wearing boxers, while the women were in corsets.

The show combined with fashion on the ramp included musical and upbeat performances by the dance troupe on stage in between the appearances of the models showing off the latest designs. There was high energy and an electric atmosphere, with huge roars from female members of the audience when they saw the male models appear, especially, in swimwear.

The ‘Fashion Village and Bazaar’ zone, included thousands of stalls; the Clothes Show is extremely popular for its wide selection of stalls [jewellery, clothing, watches, footwear]. Many British Asians attend the clothes show every year, with quite a few having their own stalls.

Some businesses were exhibiting their products/services for the first time, whilst for others, this was a regular outing every year. One of the stall owners said: “The Clothes Show is a big hit for promoting stalls as it has a big audience.”

The second highlighted catwalk included girls from the TV show Britain and Ireland’s Next Top Model, including Asian Beauty Anita Kaushik who finished third in the competition. Anita was the only British Asian model from the world of fashion and modelling. 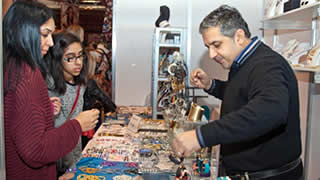 We caught up with Anita Kaushik who had a very positive message for everyone. She exclusively told DESIblitz: “Each person should follow their dreams as much as possible.”

She went on to say: I wouldn’t be here if I hadn’t pursued my dream.” Anita who is of Indian origin has recently landed herself a modelling contract with FM Agency.

“To wear something you feel comfortable with, whatever your style is, feel good about what you wear.” 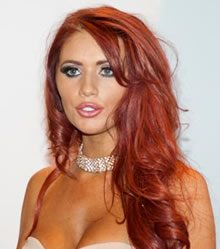 Each individual has they’re own fashion sense, however attending an event such as this, opens you to a variety of style’s and fashions. Each business/brand at the show sells something, which is different and unique. They sell certain items, which cannot be brought on the high street.

Uk’s top celebrities from the world of glamour and TV were present on all five days of the show. Some of the star attractions such as Amy Childs [fashion entrepreneur & model], Gemma Collins [fashion entrepreneur] and Charley Speed [Model] proved to be a huge success with fans that had come to seem them.

Amy Childs and Gemma Collins also had their fashion ranges on display. Having a huge fan base all over the UK it wasn’t a shock to see their boutiques flooded with customers. Customers who bought outfits from there boutiques were given the chance to get a signed autograph and picture with Amy and Gemma.

Musical celebrity Danny Shah [Urban Acts] and English R&B group ‘Stooshe’ performed their new singles in front of a large audience. Also opening the Suzuki Fashion Theatre was X-Factor’s act Times Red. Each year celebrities, designers and experts from the arts and entertainment industry put on a great show for the audiences. On Monday’s show the popular JLS performed to give fans a huge treat. 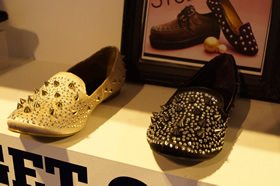 The Clothes Show 2012 attracted many people from diverse cultures, however, the lack of Asian celebrities was quite disappointing. There are many British Asian stars connected with the music and modelling industries, but none of them was to be seen at this event.

The hustle and bustle of the Clothes Show 2012 showed that yet again it was a hit with everyone at the show, especially, for bargain hunters who purchased clothes at discounted rates. The overall organisation of the event was well presented with hospitable organisers helping out as required.

Trends at the Clothes Show 2012 suggest that fashion is moving to an eastern representation. Compared to other years, designer brands are no longer dominating the exhibitor’s list, as independent brands are increasing their popularity. In 2012, the celebrity line up included the biggest names in the country, which attracted many people from across the UK.

The Clothes Show is returning to Birmingham in December 2013, packed with the latest trends and a bigger line up of stars than before. The most exciting day out will be opening to the public once again; with thousands of more stalls, enthralling consumers of fashion and style.

Photography and Videography by Khalid for DESIblitz.com © 2012