Pakistani fashion has come a long way from its traditional and cultural origins; it has hailed designers such as Maheen Khan, Umer Sayeed and Sobia Nazir. They have all made their international mark on the fashion industry, creating pieces that are more than just clothing. Some of their styles were unveiled at Pakistan Fashion Week 2012.

Pakistan Fashion Week 3 kicked off the start of new trends for the 2012-2013 season. All the leading designers and Pakistani fashion houses were out to exhibit their latest collections.

The designers list included the likes of Maheen Khan who has enriched her profile by working with Hollywood’s finest. Some of the designers that graced the catwalk during this spectacular event were Gul Ahmed, Mohammed Ali, Rana Noman and Zaheer Abbas.

Celebrity designer Umar Sayeed and Sobia Nazir who has put more than just fabric into her pieces have also emerged as strong trendsetters for the current season.

Pakistan Fashion Week was held at the Grand Connaught Rooms in London from 17th-18th November 2012. The venue was where Vivienne Westwood showcased her spring/summer collection for 2013.

This unique event has slowly become a big force, displaying what Pakistani fashion has to offer. Designers have guided people towards looking fabulous and most importantly to feel comfortable in what they wear. 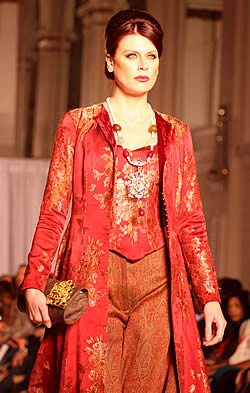 Adnan Ansari the creative genius behind this event brought talent from Pakistan, presenting fashion to a mainstream audience. Some may have felt that the clothes were just ‘Ethnic Asian’ but the reality was that there was a mix of both Asian and Western couture.

This event itself was a big eye opener to the western world demonstrating that fashion from around the world could meet and match every culture’s need. Fashion is for everyone where ever you may be.  Speaking at the Pakistan Lifestyle Expo, Ayesha Ahmed Mansoor from the label Mausummery Lawns  said: “Pakistani fashion is undoubtedly experimenting a lot nowadays.”

Though designers have smartly combined a variety of cultures together, they have still maintained the traditional origins of Pakistani fashion. Asad Sajjad, MD, Textile Links, commenting on the importance of Pakistani culture said:

“For us the tradition is restricted to salwar-kameez. Yes, pants and shirts are worn as daily wear in both [including India] the countries, but for us, the real garment is traditional clothes.”

The main themes that are clear to be in [get your notebook and pens out!] are blocked colours with heavy emphasis of embroidery and a hint of patterned layers. The main designers/fashion houses to look out for this season include: The House Maheen Khan, Sobia Nazir, The House of Kamiar Rokni, Umar Sayeed and Deepak Parwani.

For those who love to add a western mix to your traditional style then you’ll love what Maheen Khan has in store for you. Khan’s limited edition titled ‘Gulabo’ is really eye catching, as this collection embodies the true essence of Pakistani fashion. It is a very simple salwar kameez design with slight Western and Middle Eastern influences. 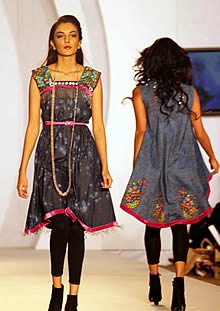 Maheen Khan is a fashion globetrotter who has famously taken embroidery to another level. Inspired by her travelling and working abroad she has learnt the hard way. She states: “European embroidery is different from Pakistani embroidery.  If they want an orange palette, they want a soft orange palette and if it is a red one, it has to be a soft red palette, unlike ours which is a very strong colour palette. It has been a huge learning curve for me.”

Khan has tapped into the Hollywood market, working as a designer [embroidery] on movies such as Sweeney Todd, Phantom of The Opera and Kristen Stewart’s Snow White and the Huntsman.

Zaheer Abbas’s collection at the Pakistan Fashion Week is one to look out for. His collection is subject around a pure white heavenly look; something similar to what Armani did two seasons ago. Dresses and over sized hats will feature in the coming seasons ahead.

Gul Ahmed’s collection stole the limelight, stunning many people at the Pakistan Fashion Week. A Pakistani woman present at the event giving her feedback said: “It’s something I could wear not just at an Asian event but also at a non-Asian event. This is something so unique and beautiful what women would not want to be seen in this.” Gul Ahmed’s collection gave a fairy tale look that every woman would want to be seen in. The long floaty outfits with intricate detail of embroidery and slight beading gave a chic and sophisticated look.

If you’re looking for a more traditional look with a modern touch then look no further than designers at ‘The House of Kamiar Rokni.’ Tia Midday and Kamiar Rokni the brains’ behind this spectacular high fashion brand have recreated the modern day Rekha image with romantic colours and bright embroidery. They have added a Chanel edge to it, representing the traditional modern day Pakistani girl.

For women who love the classic traditional look the best collection at the moment definitely has to be the style developed by top Islamabad designer Sobia Nazir. Her collection really embraces Pakistan culture head on; she has given a lot of thought into the fashion needs of Pakistani women.

Sobia has created beautiful traditional pieces using amazing embroidery and pattern work, made with luxurious silk and chiffon fabric. Her clothes are very much multifunctional in that they can be worn both at small dinner parties and big events.

Quick fact did you know that Sobia Nazir is one of the very few designers to who have used semi-precious stones within her embroidery. 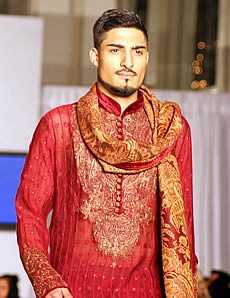 The Pakistan fashion industry is reaching new heights; it is not confined to one niche market. Pakistani styles compared with British Asian fashion are far ahead in terms of latest trends. Pakistani fashion is leading the way, creatively designing a couture look that could very well grace any red carpet event across the East and West.

Designer Umar Sayeed, one of the biggest designers hailing from the sub-continent has stamped his fashion mark in the world of politics. His career highlights include creating an haute couture look for Mrs. Fouzia Gillani, the wife of former Pakistan Prime Minister Yousuf Raza Gilani. His fashion mix includes bold and sexy designs for the women, including well-placed appliqués for men’s formal jackets and hand-embroidered shirts.

In comparison to western fashion where the focus is all on cuts and angles, Pakistani fashion and its designers really take into consideration how women should feel. Sobia Nazir and Maheen Khan’s collections are designed for both comfort and fashion, which is something that is hard to balance.

Designer Noureen Khan explains of how fashion can suit people differently. She said: “We (Pakistani women) are more on the heavier side and this leaves little scope to experiment with different cuts. Western designs can only work best when a girl is blessed with an hourglass figure. Yes, we are blessed with beautiful faces and we can happily flaunt that.”

Pakistani designers are a major force in the world of fashion and should not be underestimated. With the growing popularity and vision of couture and events such as Pakistan Fashion Week it seems that the mainstream route beckons.

So this season when you’re shopping look out for fluid/lawn fabrics, chiffon’s, silks, and definitely keep and eye out for pieces with embroidery, precious stones and layered patterns. In a Pakistani outfit, not only will you look like a star but you will also feel very comfortable.

Browse our gallery from Pakistani Fashion Week 2012-13 for some examples of the gorgeous new designs.

Photography by Amit Thakrar for DESIblitz.com © 2012

Contributions to article from Arun Masih.

New Looks for the Salwar Kameez
Highlights of Clothes Show 2012