The Gadget Show Live 2016 attracted visitors from all over UK to celebrate innovations in technology and gadgets for living and entertainment.

"The actual drone itself is state of the art"

The Gadget Show Live 2016 in Birmingham between 31st March-3rd April marked the event which would bring vendors and gadget lovers together.

There was a great opportunity to learn about new innovative gadgets and technology on the market from vendors and exhibitors as well as discovering existing successes.

With five key themes, the event had something to offer for every visitor.

The Better Life area of the event presented lifestyle and home orientated exhibits and some key attractions.

Sphero Balls which are self-propelled orbs controlled by a smartphone app that allowed control of it as a pilot.

A Giant Scalextric using was a huge hit which used latest digital technology to create a realistic racing experience.

Hive, a British Gas company that helps you control heating with a phone app presented their latest products was keen to show us their thermostat controller.

“We [British Gas] needed to listen to our customers more and understand what their key problems were. A large volume of our customers said they didn’t understand their heating systems. They didn’t know what energy they were using or wasting.”

Elvin stated they were going into lighting too, including Active plugs which can be controlled the same way.

Case-Station gave us the chance to create our very own customised smartphone case. Providing you the tools to create and design your own unique durable case. You can upload your own photo or choose from a library of fantastic designs to create a personalised case of your make and model of phone.

HTC showed-off Vive, their new virtual reality system in conjunction with Nvidia, taking visitors into a strange new world including a simulated encounter with a blue whale.

The Lab (concept and innovation)

This area of the Gadget Show Live showed-off innovation and gadgets that are still being developed. Including concepts and ideas for future creations.

Familiar exhibitors like Think Tank, Mad Lab, and the Cambridge Science Centre were all present.

It was a definite attraction for young visitors who wanted to get some hands-on experience of creating and developing technology of all kinds.

The Robo Challenge had enthusiasts preparing their robots and engaging in robot wars.

The Cambridge University Eco Racing team had their fully solar powered car ‘Evolution’ on show, which has participated in races including 3000 km endurance event in Australia.

One stand which was very popular with visitors was the iSwegway vendor. Where lots of people were being taught how to balance on the iSwegway and learn to ride it.

The shows at the Connect and Innovation theatres discussed and revealed some great developments and inventions. 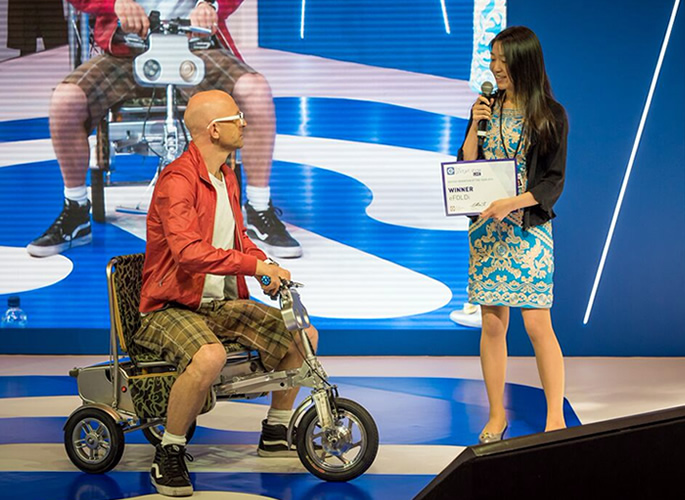 Invented by Sumi Wang and her father Jianmin after he broke his leg and struggled to get around, FOLDi is a durable electric scooter that can be folded to the size of a suitcase for easy transportation and storage and also into a comfortable chair.

Ms Wang, from Surrey, also launched a Kickstarter campaign at the show to fund the development of eFOLDi and bring her invention to market.

Power Up (outdoor and personal)

The Power Up section gave an insight into the latest technology and products available for outdoors and personal use, like wearables.

DTV Shredder UK showed us their ‘ride’ called a ‘Shredder’ which was a mixture of snowboarding, skateboarding and quad-bikes. It has an incredible tilting function.

“We retail these Shredders. We operate them all day every day at our site in Cheshire at Hover course.”

Tesla motors was present giving visitors the opportunity to sit in their Model S cars and go for test drives.

A special track was set-up for young drivers to have a go at driving and controlling small vehicles.

A Gadget Show Live wheels test track had visitors riding electric skateboards and enjoying every aspect of this fun-ride.

Snugs, a company which produces custom earphones had a lot of interest from visitors. We spoke to the CEO, Paul Jobin who told us more:

“We make custom fitted earphones for everyone. We take a normal earphone which tends to fall out and uncomfortable. We chuck away the small, medium and large bud and we create a little Saville Row suit for your ears.”

The earphones are made just for you and customised to your ear shape. In addition, Snugs produces customised bluetooth wireless earphones and also the latest and best in-flight earphones too.

Parrot took over our Drone Flying Zone at the show. Whilst Yuneec UK educated us about drones and their latest model the Typhoon H. A drone which has been developed as part of their partnership with Intel.

Omid Maddah from Yuneec told us:

“The actual drone itself is state of the art. It’s a prosumer drone so it’s got professional features at a consumer price.”

He explained that the drone has retractable landing gear, a 360 degree gimbal camera with a Sony sensor for impeccable 12 megapixel images and up to 4K video, a six rotor flight safety ensuring the drone does not ‘fall out of the sky’ and advancement technology so it does not hit objects.

With an entry price of the Typhoon H is £1099.00, this drone definitely is an incredible gadget to own.

iFit were present to show-off their techwear. Especially for fitness and well-being. From smartwatches to bands to shoes, we were shown what their technology can do to help you track your fitness regime and even your sleep on an iFit bed. Their smartphone app enabled their devices to log your fitness journey.

The Arcade (game and play)

The Arcade was as the name suggests a homage to gaming and related technologies.

Gamevice took over the new Mobile Gaming Pod at the show. YouTube Gamers were at the the event showing off their play in The Arcade.

Indie gaming was popular hit at the show he nation, where some of the very best and latest games in the indie world were on display to play. Including Radial G, Hue, Line Wobbler, Bip and ESPER 2. 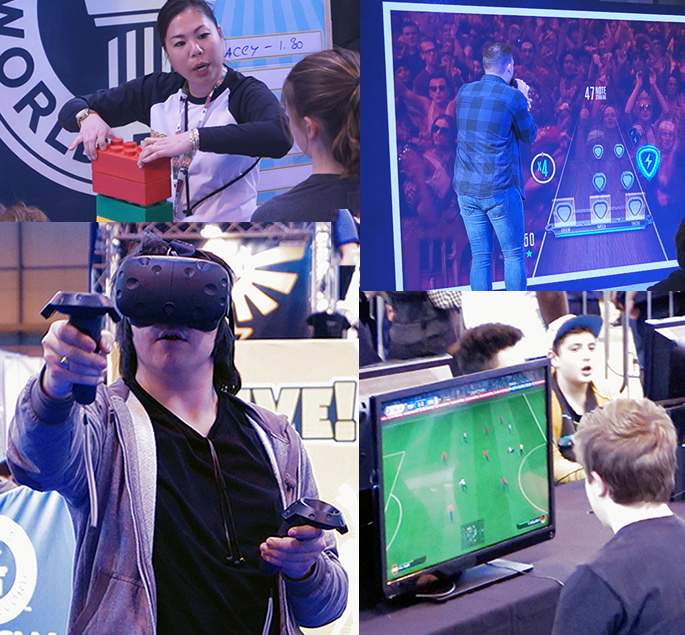 The popular Football game Pro-Evolution Soccer (PES) 2016 staged their UK final at the show on the PS4. Fifa 2016 also had its own area set-out for gamers to come and play.

Virtual Reality games were the flavour of the year with many pods showcasing their VT delights in gaming.

A Guitar Hero stage encouraged participants to show off their skills on a huge screen, whilst the Guinness Book of Records.

Watch our video giving you highlights from The Gadget Show Live 2016: 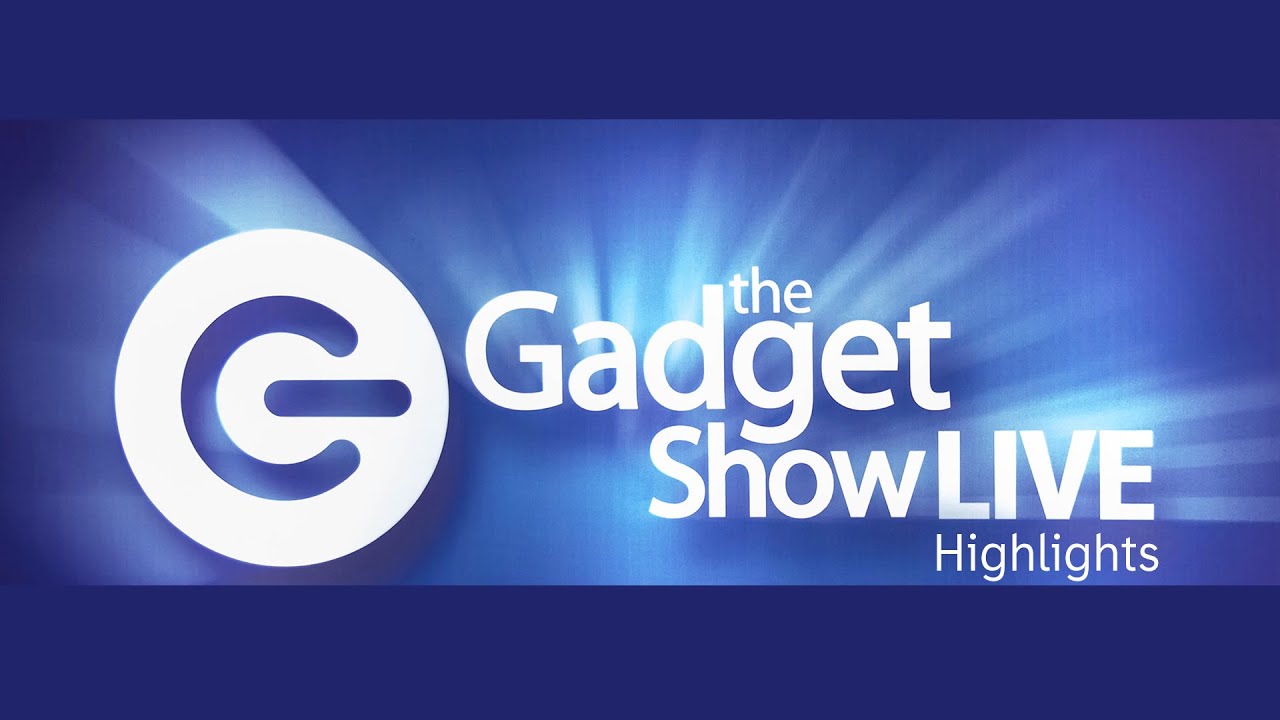 This was the big attraction for visitors featuring the presenters of the TV show The Gadget Show and a chance to see a live show all rotating around mind-blowing gadgets and technology, including tech vs humans challenges.

Jon, Amy, Jason and Ortis entertained the  huge crowd at the hour long live show. Huge numbers of prizes were on offer and gave the audience

Google Cardboard was used to give visitors a special thrill. The show was filmed live for TV too for televising.

Britain’s Got Talent most successful magician Jamie Raven also gave an incredible performance to wow fans at the live show.

Overall the Gadget Show Live 2016 did not disappoint, and gave a fantastic insight into the world of innovation gadgets and technology to suit all lifestyles.

Nisha has an intense passion for reading books, tasty cuisine and enjoys keeping fit, action films and cultural activities. Her motto is 'Don't put off until tomorrow what you can do today.'
Indian Hackers reveal security issues in Facebook & Google
6 Smartphones with the Best Cameras