Legendary Indian classical musician Pandit Ravi Shankar passed away on December 11, 2012, aged 92. His music inspired many people all around the globe.

Ravi Shankar had a very distinct style of playing the sitar

DESIblitz focuses its spotlight on distinguished music pioneer Ravi Shankar. On 11th December 2012, the world of music learnt that Ravi Shankar was no more. The news came as a shock to everyone in India and across the world.

Everyone was speechless, finding it difficult to describe this huge loss. His work and music will continue a positive legacy, motivating many young aspiring talents to follow in his footsteps.

Referred as Panditji in respect, he was a national treasure whose sitar did the talking across the globe. This man still stands as the No.1 rock legend of Indian classical music.

Ravi Shankar died at the age of ninety-two, surrounded by his family. Shankar had been admitted to Scripps Memorial Hospital in La Jolla, San Diego, California, where he underwent heart valve replacement surgery on 6th December 2012.

Panditji was born Robindro Shaunkor Chowdury on 7th April 1920 in Varanasi [Uttar Pradesh] to an illustrious family. His father, Shyam Shankar worked as lawyer in London, while his mother Hemangini Devi raised him back in India. Shankar met his father for the first time when he was eight years old. 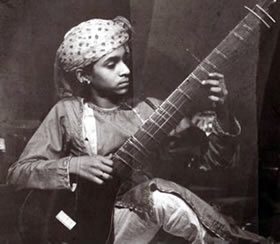 At the tender age of ten, Shankar went travelling to Europe as a dancer with his elder brother Uday Shankar’s dance troupe. It was this contact with the West that would impact Ravi Shankar further down the line in his career.

However it was when he first heard Allahuddin Khan, one of the most respected musicians [Maihar Gharana] of his generation that he turned to music. Under Khan, who planted the music seed in him, Shankar soon became a sitar wonder in a very short space of time.

In 1941 he married Annapurna Devi, the daughter of Allahuddin Khan. Their only child, Shubendra Shankar [1942-1992] was born a year after, before the couple separated.

He had an affair with New York entertainment producer, Sue Jones, which led to the birth of their daughter Norah Jones in 1979. Norah is a successful American singer-songwriter, winner of eight Grammy awards in 2003. 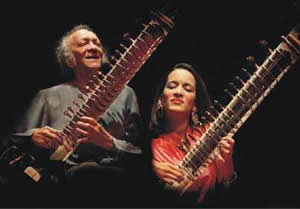 Shankar lived with Sue Jones until 1986. He married Sukanya Rajan in 1989 at Chilkur Temple in Hyderabad, India, who he had known since the 1970’s. In 1981, Anoushka Shankar was born to Shankar and Sukanya Rajan. Anoushka has followed in her father’s footsteps and established herself as a popular sitar player.

As the news spread of his death, tributes and anecdotes poured in throughout the day from artists and music lovers around the world. Uday Shankar’s wife Amala, a dancer in her own right, patiently grieving from Shankar’s death said:

“He was like a friend, family member and admirer. When I heard the news in the morning I did not cry. It is the loss that I won’t see him. Ravi will always be there forever.”

Pandit Ravi Shankar was a pure genius of the sitar, as his music would move from genre to genre, catering to a generation of music lovers. His musical compositions and rock star charisma will be missed by his fans everywhere.

Ravi Shankar had a very distinct style of playing the sitar, quickly introducing new Ragas and Carnatic rhythms to his armoury. His emphasis on two skilled musicians performing simultaneously [Jugal Bandi Style], promoted instruments like the Tabla, giving it more prominence within the Industry.

Ravi Shankar was very selective when it came to composing music for films. Thus he worked his magic on domestic and international projects where he felt there was depth.

Shankar’s first few film compositions came in the 50’s when he created the music for Satyajit Ray’s Appu Trilogy, consisting of three Bengali films: Pather Panchali [1955], Aparajito [1956] and The World of Apu [1959].

He had a brief but strong connection with Bollywood as a music director in memorable films like Anuradha [1960] starring noted Hindi actor, Balraj Sahni. 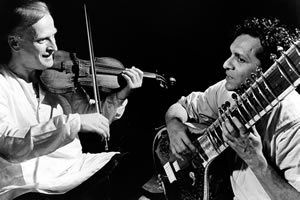 In 1982 he did the fantastic music for Attenborough’s biographical epic Gandhi. He was nominated for an academy award in the ‘Best Original Score’ category for this film. His music soon became familiar in the circles of Hollywood too.

He also played at the Woodstock Festival in 1969, receiving a standing ovation from fans that appreciated this wider culture of tasteful music.

In 1971, Shankar won his first Grammy Award for the album ‘West Meets East’ [1967], which was collaboration with American violinist, Yehudi Menuhin.

When questioned about this Panditji was adamant it was not a fusion. He said it was “just an easy meeting point.” While complimenting the Indian sitar virtuoso, his colleague Menuhin said:

“Ravi Shankar has brought me a precious gift and through him I have added a new dimension to my experience of music. To me, his genius and his humanity can only be compared to that of Mozart’s.”

Ravi Shankar will be best remembered as a world ambassador for classical music. Beatles star George Harrison was determined to learn the sitar ever since he fell in love with the music of Ravi Shankar. 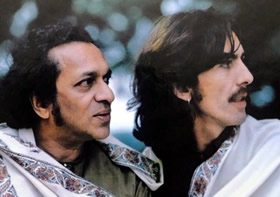 In 1967, Ravi Shankar shared his romanticism of music with Beatles legend George Harrison. Shankar spent six weeks living with Harrison on a house boat in the tranquil waters of the Dal Lake in Srinagar, Kashmir. Harrison would often speak of this time when he took sitar lessons from Panditji.

It is widely believed that on this houseboat, Harrison thought of composing the song ‘Within You, Without You’ from the album Sgt. Pepper’s Lonely Hearts Club Band [1967]. This track was released shortly after the Beatles visit of India.

The Beatles partnership transformed Panditji into an international celebrity, stimulating audiences with a complete fusion of raga-rock music. He was the only Indian musician to have played at rock concerts on the condition that the structure of his music was not challenged. 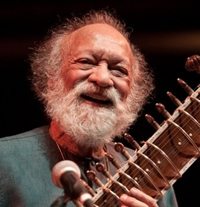 In 1999, Ravi Shankar was awarded the Bharat Ratna, India’s highest civilian honour. He was also a member of the Rajya Sabha during the late 80’s.

Recognising his work Grammy will confer Ravi Shankar with the Lifetime Achievement Award in 2013. His daughter Anoushka Shankar has also been nominated for a Grammy Award [2013]. Anoushka was born to Shankar and Sukanya Rajan in 1981. It was not until 1989 when Shankar and Sukanya finally tied the knot and remained together until his death.

Whenever he was asked about the secret to his fame and popularity, he would always smile and point to his sitar. On this note DESIblitz tributes Ravi Shankar with famous lyrics from the Beatles:

“And the time will come when you see we’re all one, And life flows on within and without you.”

All copyrights for photos are fully acknowledged with their respectable owners.