The pride of Indian music, Lata Mangeshkar launched her own music label on 13th January 2013 in Mumbai. The Big B came to support the event.

“The reason I started this label is because last year in October, I completed seventy years in the film industry.”

Lata Mangeshkar, known as the nightingale of Indian music, recently launched her very own music label in Mumbai, India.

The launch, which was originally to be held on 18th November 2012, had to be pushed back due to the critical health of Bal Thackeray. After the death of the Shiv Sena leader, the event took place on 13th January 2013. 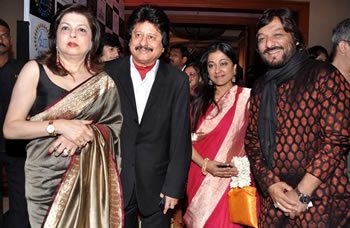 After a long time, Big B and Rekha came face to face at this event. It was reported that they were cordial with one another. However, Big B, who has always remained silent on his alleged affair with Rekha kept his distance. Indian playback singer Hariharan along with musician Vishwa Mohan Bhatt performed live at the event.

According to the evergreen singer, the music label will offer opportunities to young and upcoming talent. The label will also feature some of the finest works produced by prominent vocalists – Asha Bhosle, Meena Khadikar and Shankar Mahadevan. 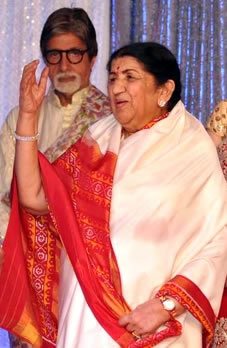 Speaking at the launch Lataji said: “The reason I started this label is because last year in October, I completed seventy years in the film industry.”

During her illustrious career, the respected playback singer from India has recorded songs in over a thousand Bollywood films and sang songs in a number of Indian and foreign languages.

Till date some of her most popular songs include: ‘Aaja Re Pardesi’ from Madhumati [1958], ‘Pyar Kiya To Darna Kya’ from Mughal-e-Azam [1960] and ‘Chalte Chalte’ from Pakeezah [1972]. She received a National Film Award as ‘Best Female Playback Singer’ for her rendition of the song ‘Yaara Seeli Seeli’ from Lekin [1991].

Mangeshkar was very critical of an era where digitisation has aided many of the compositions that we hear today. While Lataji has become very selective when it comes to films, she is still open to offers if any interesting project comes her way.

It was due to the challenges faced by the music industry that the legendary singer considered to start her own label.

“In recent years music industry has faced some challenges and existing music labels have been less forthcoming in releasing non-film albums. The few that were made faced many restrictions of content, disparate views on market acceptability, lack of promotion, awareness and thus availability,” she said.

“This situation caused concern and has led to the genesis of LM Music. With this, it is our foray into a venture that will give us unfettered creativity and satisfaction by producing albums that I believe in,” she added.

The renowned singer released six albums, comprising of devotional, spiritual and children songs. Her music label is unique in that it will only promote non-film music. 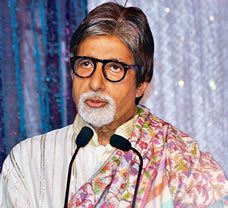 Hence, when addressing the media, Lataji requested Mega Superstar Amitabh Bachchan to select some of his fathers best poetry so that she could present them under the new label. The late Harivanshrai Bachchan created an amazing piece of Hindi poetry for the Yash Johar produced film Agneepath [1990].

Lata Mangeshkar also wishes to sing with Big B. The pair did a duet for the song ‘Yeh Kahan Aa Gaye Hum’ from the film Silsila [1981], but did not record the track together. Dignitaries who attended the launch of this music label praised the queen of melody.

“Lataji is a Bharat Ratna and the way she has inaugurated her LM music company today, I hope this label will also become a Ratna in India,” said Mr. Bachchan.

“For generations Lata Mangeshkar has been a guru. There is no one today who has contributed so much to music. I can very well say she is the eighth wonder of the world,” said Pt. Jasraj. 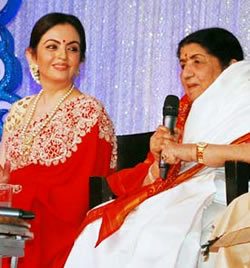 Indian business woman, Nita Ambani added that the launch marked an important day for everyone. She said: “This event is a landmark for all of us …Lata Mangeshkar is a living legend. She has enthralled millions of hearts all over the world with her music.”

“For generations, women in my life have worshiped her voice, she has such an impact…thank you for making me a part of this journey,” she added.

Lata Mangeshkar also floated the idea of providing a platform for youngsters to excel in the field of music-singing. Her aim is to identify talented individuals from reality TV and nurture them into big stars. She also has plans to develop her own reality show, which will include some experienced judges.

Mangeshkar feels that many of the reality shows do not rightly award deserving candidates, which is rather controversial in her opinion. She wants to replicate the model of ‘Meri Awaz Suno’ [1996], where the judges had the final say as opposed to the public. In 1996, Sunidhi Chauhan won this competition and became a successful playback singer.

Through creativity and innovation, Lata Mangeshkar hopes her music label will inspire many generations to come. DESIblitz wishes Lataji all the best on her new musical journey.

Faisal has creative experience in the fusion of media and communication and research which increase awareness of global issues in post-conflict, emerging and democratic societies. His life motto is: "persevere, for success is near..."
Star Parivaar Live 2012 Highlights
Sonia Sabri celebrating Ten Years of Kathak