Lata Mangeshkar has contributed immensely to Indian Cinema. We present her top highlights linked with Bollywood movies, stars and filmmakers.

The Nightingale of Bollywood, late Lata Mangeshkar has had a huge impact on India’s biggest film industry.

Coming from a musical family, Lata Mangeshkar initially became an actress. This was a strategic entry point to fulfill her ultimate ambitions of singing full-time.

Her first big film break as a singer came courtesy of a song, featuring the mighty Madhubala. From then onwards, Lata Ji did not look back.

With music playing an important role in Bollywood, she has had a massive contribution in a career spanning over six decades.

Her tunefully voice did justice to all her onscreen actresses. She became famous for her quality, presenting a fair aspect of professionalism towards all the filmmakers who had constant faith in her.

We provide some focal points associated with Lata Mangeshkar and Bollywood.

Entering Films as a Roadmap for Music 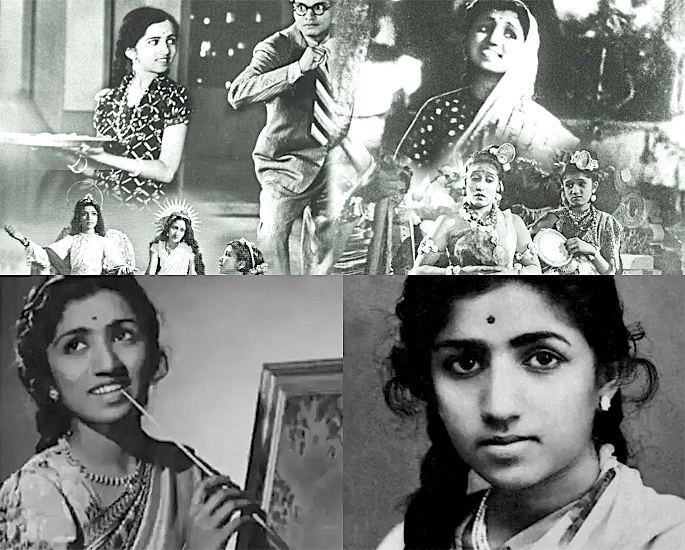 For Lata Mangeshkar, acting was never her real passion. However, it became a means to eventually follow a musical path.

Her situation of that time echoes with a famous saying by American singer-songwriter, Tori Amos:

“Sometimes you have to do what you don’t like to get to where you want to be.”

That is exactly what Laat Ji did. After performing on stage and acting in a few Marathi films, she got her first break in Bollywood.

She went on to play a minor part alongside sister Asha Bhosle in Bari-Ma (1945), a direction of Master Vinayak.

She also acted along with the Queen of Melody and famous  Pakistani actress Noor Jehan. Lata Ji in many ways took the Indian mantle from Noor Ji as the latter left for Pakistan post-partition.

It was in this film that Lata Ji performs the bhajan, ‘Maata Tere Charnon Mein’. Lata Ji also sang a few lines for another song in this film – Tum Maa Ho Badi Maa.’

Additionally, the singing starlet had a prominent role in Mandir, also a direction of Master Vinayak and Dinkar D.Patil.

Besides music reasons, Lata Ji also did films to support her family, following her father’s death.

The Magical Effect of Lata Mangeshkar and Madhubala 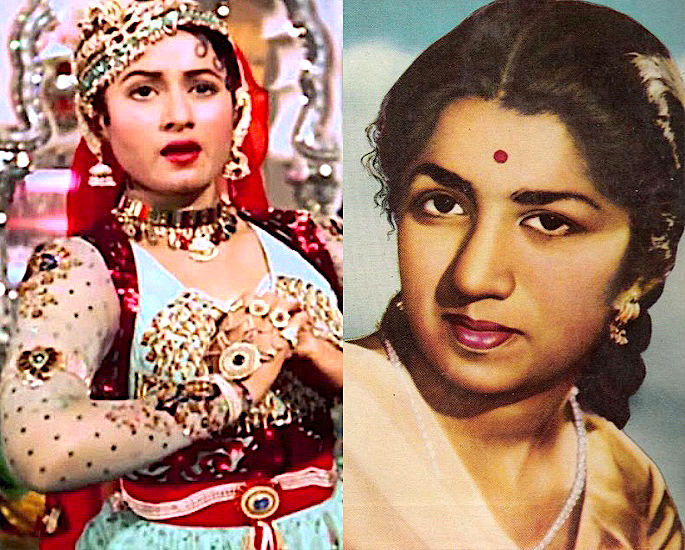 Lata Mangeshkar and her film journey from a playback singing view really took off after singing the song ‘Aayega Anewala Aayega’.

Madhubala plays the on-screen actress, alluring Ashok Kumar in a ghostly manner during the song. The actress, the singer and the song from the film Mahal (1949)  became an overnight it.

Apparently, Madhubala had put a condition when signing this film. And that was for Lata Ji to lend her voice in the film’s songs featuring Madhubala.

Ankit Chougale a fan of the song, mentions an interesting fact on YouTube about the singer and actress:

It seems this film and track gave both celebrities a big impetus for what was to come, particularly Lata Ji.

The magical effect of the Lata Mangeskar and Madhubala came to the forefront for the evergreen song ‘Jab Pyar Kiya Toh Darna Kya.’

The song from Mughal-E-Azam (1960) is one of the best visual songs in Bollywood that had the voice of Lata Ji.

When watching the track on-screen, it is as if the souls of Madhubala and Lata Ji are entangled with each word and movement.

Author Ramesh Dawar also highlights the essence of Lata Ji’s vocals for this song in his book, Bollywood: Yesterday, Today and Tomorrow (2006):

Though it has to be said that Lata Ji’s beautiful voice beatifies Madhubala even more. The two are incomplete without each other.

Being of similar age also meant that Lata Ji’s sweet voice was a compliment to Madhubala’s innocent on-screen presence. It was a splendid performance by the two. 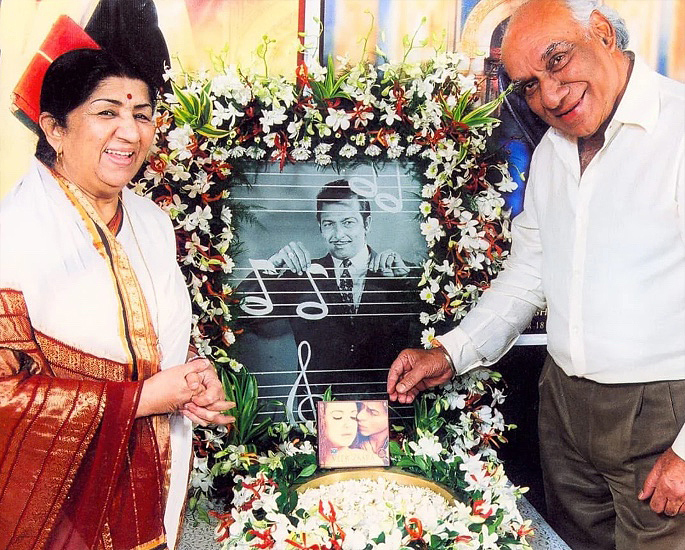 They had a fruitful relationship which began in 1959, by Laa Ji singing songs for Dhool Ka Phool.

Barring a couple of films, she sang for all Yash Raj films until his penultimate film Veer-Zaara (2004).

She gave voice to many top Yash Raj actresses on-screen. The list is endless, including:

To put things into perspective, she sang for Yash Raj Films for over five decades. Who can forget the on-screen chemistry of Amitabh Bachchan and Rekha for the song ‘Yeh Kaha Aa Gaye Hum’ in Silsila (1981)?

Interestingly, whilst Amitabh narrates the poetic portions of the song, it is Lata Ji who brings life to the love between Big B and Rekha.

The most fascinating aspect is that her voice was ageless and timeless.

When she sang ‘Mehndi Laga Ke Rakhna’ from DDLJ, the on-screen actress Kajol was almost half her age, yet Lata Ji’s voice was a perfect fit for her. 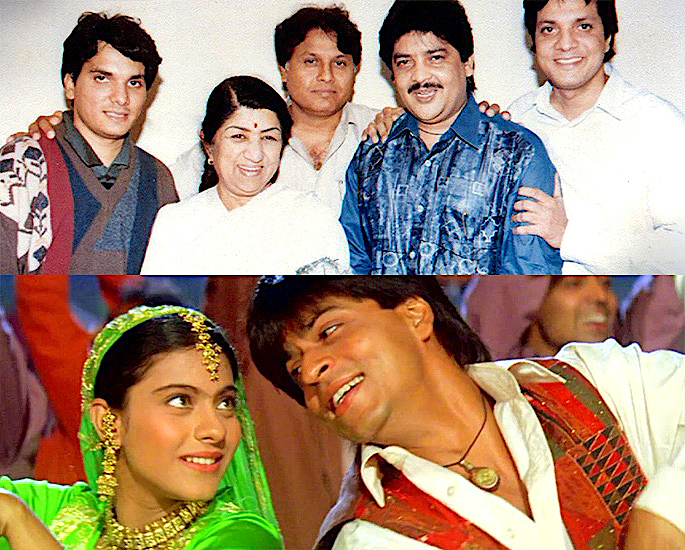 Post-death of Chopra, Lata told the media that he was not just a genius filmmaker, but also had good ears for music:

“When he turned into an independent producer with Daag in 1973, he sat and explained the story to me and the situation for every song.”

The two had a deep connection within Bollywood films, reaching the heights of success.

Lata Ji felt actress Nutun did justice to her voice the most in films, especially with the latter being able to sing herself.

In reply to a question from India Today about which actress suited her the most, she said:

“That’s a tough one. Each heroine – from Madhubala and Meena Kumari to Sridevi and Madhuri Dixit – brought something special to my songs.

“But if you insist on one heroine, I’d have to go with Nutan. She was a singer herself.”

“When she emoted to my songs on-screen, she actually sang along.”

Lata Ji’s songs came in every big banner film under the direction of top filmmakers from the industry.

Lata Ji has sung solo and been part of duet tracks for Bollywood singers. Again she has done duets with every big playback singer of Bollywood.

Despite Lata Mangeshkar, no longer being amongst us, her voice in Bollywood will live on forever. Her fans may also want to watch some of the films she has acted in.

Faisal has creative experience in the fusion of media and communication and research which increase awareness of global issues in post-conflict, emerging and democratic societies. His life motto is: "persevere, for success is near..."
Sadaf Kanwal faces Backlash for Remarks about Women
Pakistani Drama claims Women with Curly Hair are ‘Ugly’