Sonia Sabri is an internationally acclaimed Kathak dancer and choreographer. Her company celebrates its tenth anniversary with a new production – Kaavish.

Sonia Sabri who runs an accomplished dance troupe in Birmingham performs her latest production ‘Kaavish’ at several venues across England. Her company is known for creating new productions in the North Indian dance style of Kathak.

Kaavish commemorates ten years of the Sonia Sabri Company with a combination of mesmerising dance and dynamic live performances.

Kathak is a classical art and poetic form, which actually means storyteller. This dance style originated in ancient India at a time when there was no other source of entertainment. 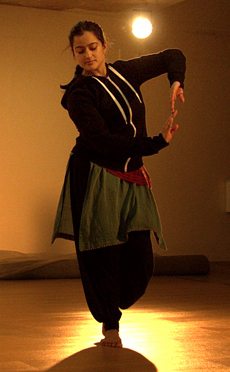 Sonia was born and brought up in Wolverhampton to parents who encouraged her to take up performing arts at a very early age. Talking of her early inspirations Sonia said:

“My first experience of Indian dance or any kind of reference to the skills of dance was primarily the actress Rekha. Rekha was my idol before I knew anything about classical dance. Her grace, charisma and subtlety in dance routines were captivating and I copied her every move.”

She was also influenced by videos of the late Michael Jackson. She said: “It was Michael’s energy and virtuoso moves that absolutely fascinated me.”

Sonia’s father had ambitions for her to become a Bollywood actress, so she enrolled in the Birmingham School of Speech and Drama, where she began her journey towards stardom by attending various dance classes. It was here that she experienced Kathak for the very first time.

“My father and I went to see a Bharatanatyam class and as we had some time to spare before the class we ended up walking around and found a kathak class in progress. My father told me to try it since we were already there and since then I’ve never looked back,” Sonia said.

In an interview with STV, Sonia recalls that she was overwhelmed by her teacher’s presence and grace. The moment she saw her teacher tap her foot, she knew she wanted to do this. Sonia learnt the art of Kathak from famous British based dancer Nahid Siddiqi. 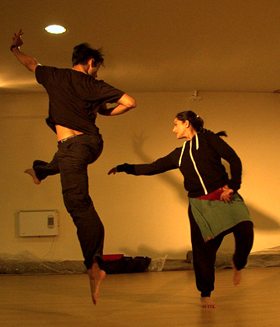 Over the years besides the classical formats of Kathak, Sonia has also presented an urban and contemporary form. She has engaged not only the hard-core fans of dance but also targeted a young and up coming generation of dance enthusiasts.

A good example of this was the hugely successful production Kathakbox. This project created a dialogue between many disciplines [including music] and art forms vibrant in Britain. Sonia was the choreographer and one of the dancers of Kathakbox.

Kathakbox is all about trying to find a story within oneself – discovering a meeting point between movement and emotions through musicality. Other notable productions from the Sonia Sabri Company have included ‘Hatke’ and ‘Ekalya.’

The pioneering Sonia Sabri Company is celebrating its 10th anniversary by presenting its latest work Kaavish.

Kaavish [‘to achieve one’s desires through action’] opened at the Capstone Theatre in Liverpool on 17th November 2012. This was followed by a spectacular performance at the Midlands Arts Centre in Birmingham on 24th November 2012.

“Kaavish is really a celebration of the company’s past and current works,” says Sonia, “and its place within the UK’s mainstream dance sector. It’s like a punchline to the end of one chapter of a bestselling novel with the next chapter to follow – like a book you just can’t put down!”

DESIblitz was invited to Sonia’s dance studio ‘Baithak House’ to catch up with the Kaavish team who were busy preparing for this production. It was a privilege to spend time at the dance house, which has entertained famous artists such as Indian playback singer Hariharan. Watch the exclusive in-depth interview with Artistic Director Sonia Sabri in which she talks about her childhood, her illustrious career and of course Kaavish:

In the first half of the programme audiences can expect to witness three critical performances, which have been specially redesigned. Performances on show include Red [Extracts], Neon Dream [choreographed by Shobana Jeyasingh] and Nisbat [Extracts].

The second part of the show features a new collaboration between Sonia and the talented Indian classical dancer Ash Mukherjee. In a press release issued last year, Sonia said:

“Ash and I are creating a piece which was initially inspired by Woody Allen’s brilliant ‘Death Knocks’, a one-act play he wrote in 1968.” 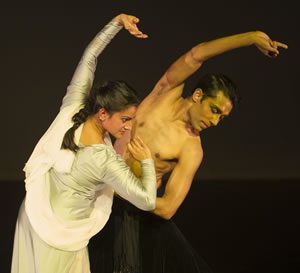 “The play, which was part of Woody’s famous stand-up routine, featured two characters, a grumpy old guy called Nat, and Death; it’s really a monologue about our fear of dying, but it’s also extremely funny!  The dance languages work in dialogue and are based on opposites: dark and light, negative and positive, etc,” she added.

Sonia’s husband Sarvar Sabri, the company’s musical director and tabla maestro, has arranged the music for Kaavish. Pianist Dan Nicholls and vocalist Shoma Dey will join him on stage.

It remains to be seen if Kaavish performs at rural and international venues. In the past Sonia has been on tours abroad, acting as an ambassador for British arts. She has contributed to the arts scene and represented Britain as one of the leading trend setters in this genre. Sonia’s work has set a benchmark for the standard of arts. 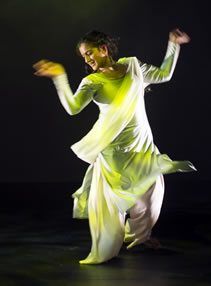 Sonia also delivers education and therapy work, involving people from all walks of life. This includes interacting with people from different backgrounds and with different abilities.

With funding cuts to the arts sector, one hopes that concerned authorities will continually support Sonia Sabri. Her company has contributed immensely in the field of music and dance.

Sonia has been known to come up with something different, whenever she creates a new show. And this is exactly what she is offering through the stunning production Kaavish. To meet her own high standards, Sonia will be practicing hard in preparation for her upcoming shows.

Big fans of Kathak and contemporary dance look forward to yet another exhilarating decade from the cool, calm and collected Sonia Sabri.