Sholay back in 3D after 39 years

Ramesh Sippy’s Hindi classic Sholay hits our screens again, but this time in 3D, allowing fans and audiences to reminisce the adventure once more on the big screen.

“With 3D, every pivotal character stands out quite literally in the film.”

They are sent to fight Gabbar (Amjad Khan) by Thakur Baldev Singh, amidst the everlasting love and comedy quirks of Basanti (Hema Malini) and Radha (Jaya Bachchan).

This classic hit has returned to India’s cinema screens allowing fans to relive the shenanigans, emotions, extraordinary bond of friendship and incredible action – this time in 3D. 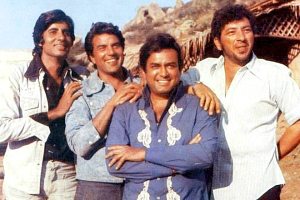 The 1975 hit film, Sholay, has marked a definitive spot in the lives of fans worldwide, both young and old for almost 40 years, and now it has been restored and reconstructed in 3D for a larger-than-life viewing experience.

Movie lovers have been given a chance to relive and experience the epic adventure of Jai and Veeru, while youngsters can now watch the most admired film of all time in a modern and more current setting.

Interestingly, Sholay is the longest movie to be made in 3D. It took 3 years to convert the 160+ minute masterpiece, with 250 people working on the film to convert it into digital 3D format, which was headed by Frank Foster who is a computer animator in the UK.

Help was needed with the additional technical consultation from Hollywood DI, a US based production studio. Chairman and MD of Maya Digital Studios, Ketan Mehta, mentioned there was some difficulty in completing the film in 3D:

“The scene where Hema Malini tries to pluck mangoes was the most difficult scene for 3D conversion,” he explained. 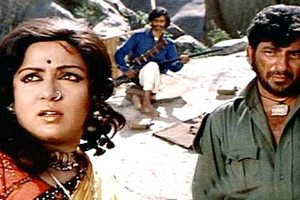 The technology that was used made sure the film didn’t look blurred even without the 3D glasses: “When we speak about depth and 3D, each individual portion is a separate layer, with its own depth.

“From her nose, to the hair, to the flexed hand, to each and every tree, to every leaf of each tree become a separate layer which had to be pulled out individually and then composited together to form a 3D frame with the right depth,” Mehta said.

The grandson of G.P Sippy, Sascha Sippy was passionate about developing the epic film Sholay in 3D, as he mentioned that he wanted to present the movie to a newer audience.

He said: “Since most would have already watched it on television and theatres earlier, a newer way to present it was through technology.”

To get the audience eager to see Sholay on the big screen once again, Sascha Sippy really had his mind set on the sound and visual effects, in order to achieve his goal to present the film in a different but authentic way.

When the original movie was first released, it was budgeted at Rs 3 Crore and grossed Rs 15 Crore. Jayantilal Gada, Chairman of Pen India, presenter and distributor of Sholay, invested Rs 25 Crore to have the film converted into 3D:

“When I was approached I really liked the idea. This will give youngsters a chance to watch the most loved movie on the big screen,” he said.

The cinematic release of the 3D edition of Sholay in India took place on January 3, 2014, making a warm Box Office collection of Rs 6.30 Crore in its opening week. Gautam Dutta the COO of PVR Cinemas said:

“The response to Sholay 3D was alright. The occupancy was between 60 percent and 70 percent. There were people who turned up with their families and got nostalgic. They were happy to see it in 3D format.” 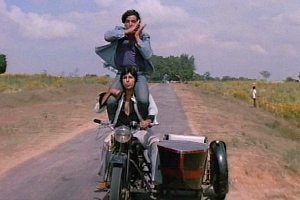 Film trade analyst, Taran Ardarsh believes that Sholay 3D works for two reasons; the simplicity that is shown and the revitalising of the drama. He said: “With 3D, every pivotal character stands out quite literally in the film.”

The legendary film projects the great work of Director Rimesh Sippy, for which he is still remembered for till today. Salim Khan and Javed Akhtar who are the writers of Sholay have been immensely applauded for their finest piece of work.

Proud son, Salman Khan has been tweeting followers encouraging them to go and watch the film: “Its a cult film, experience it, its a journey. The way the film is written, directed n produced 30+yrs ago.

It is evident that this film is a classic and will continue to remain so, it is remembered for its array of characters and memorable dialogues and has been talked about for decades.

If asked what the all time greatest Bollywood film is, Sholay will for sure come out on top without a second thought, the new 3D format simply highlights how popular this film is the hearts of many cinema lovers around the world.

Sholay 3D will give you the chance to relive and experience the epic tale once again, and without a doubt leaving you feeling nostalgic over one of India’s greatest films.

Nadeera is a model/dancer hoping to take her talents further in life. She likes to carry her dance talent in charity functions and is passionate about writing and presenting. Her life motto is: "Live life over the top!"
Multi-talented Veena Malik is Unstoppable
Madhuri Dixit stuns in Dedh Ishqiya