An Indian delivery man was fired after he was filmed eating the client’s food. This has sparked a social media debate with some sympathising with the man.

"All food deliveries should offer 1-2 square meals a day for their delivery people."

An Indian delivery man was sacked by food delivery company Zomato after he was filmed eating the client’s food then resealing them.

The video, which was filmed in Madurai in southern India, has been viewed thousands of times on social media and was initially met with disgust and anger.

Zomato has confirmed that the food that the man is eating in the video was meant for customers. They said that they have a “zero tolerance policy” towards food tampering.

The company said: “We have spoken to him at length and while we understand that this was a human error in judgement, we have taken him off our platform.”

However, as the video became more widespread, the company’s decision to fire the employee proved to be unpopular and many sympathised with the man.

This has since sparked a debate on social media as to why the man had resorted to eating the food he was supposed to be delivering as well as the delivery industry in India.

While the company complied with their policy, people have questioned their working conditions which could have prevented the incident.

This is what happens when you use coupon codes all the time. ? Watch till end. pic.twitter.com/KG5y9wUoNk

The food delivery industry all over the world is a fast-paced environment with delivery men and women working quickly and tirelessly to deliver the item to the client before moving onto the next.

It is an environment that may not leave any free time to eat especially if it is busy. This means that some workers may not eat anything until their shift has ended.

The fact that they are delivering food for hours will only intensify their hunger.

It is possible that the Zomato delivery man is someone who has not eaten all day and out of extreme hunger, did what he did.

This was identified on social media with some calling for food delivery companies to offer meals to their delivery workers to ensure that incidents like this never happen again.

“All food deliveries should offer 1-2 square meals a day for their delivery people. It’s only fair.”

One thing to note is that food delivery workers are independent contractors, it is their choice whether they want to take a break or not. Having a break will then give them the time to eat.

It is up to the delivery person how long they want to have a break for, not the company who have advised workers to take one. 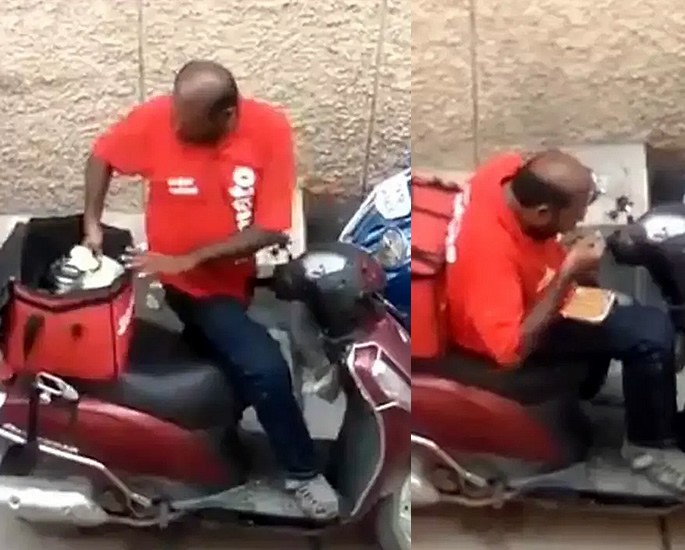 A representative from Zomato said: “All partners are advised to go offline when they want to take a break.”

What was also mentioned by the Twitter user which was interesting was that the Zomato delivery man may have done it because he cannot afford to have a proper meal.

When you have a family to support and have to pay for petrol because of the job it is not a lot of money which may lead to becoming overworked and hungry.

It is not just the filmed delivery man who may be in this situation, other food delivery drivers have spoken about these issues.

One food delivery driver said: “Earlier we used to get 60 rupees per delivery. Then from 60, it became 40. Still I continued because I had to educate my children.

“Now the company is planning to make it 30 rupees per delivery. But I have expenses, petrol is expensive, I have children as well. Tell me what should I do?”

There are an estimated six to eight million people joining the Indian workforce each year even though jobs are not growing at that rate.

This means many people are willing to work in exploitative work conditions so that they can have some sort of income.

In the immediate aftermath of this incident, many have talked about the supposed poor working conditions but this has been denied by both Zomato and Swiggy, another food delivery company.

They denied asking their delivery workers to meet unreasonable deadlines or impose fines on those who do not meet “targets”.

The social media debate shows a possible ignorance because many people have defended the man’s actions by blaming it on the working conditions, but how many of them have actually done that job?

Both major delivery companies in India have also said that their conditions are reasonable for workers to manage.

While many people questioned that the demanding working conditions led to the man eating the food, others said that the company was right to fire him.

He broke one of the company’s most important policies which meant that they had no other choice but to fire him.

As a food delivery worker, you have the option to reject some orders if it is too far. It is the worker’s choice to choose what order they would like to deliver as they are independent contractors.

They are not told to do every delivery that they received.

@ZomatoIN why is there a sympathy for a delivery boy,Zomato Delivery Guys can reject orders due to location being far, they can keep their phones signed out so that they do not receive the orders, So there is no excuse of no time for eating food or being hungry!!

As independent contractors, it is their choice if and when they want to take a break, all they have to do is turn off their location.

This is what the Zomato delivery man could have done. He could have packed some food for himself and when ready to take a break, turn off his location and do so.

It was wrong to eat the food that was meant for customers especially because he would not be happy if someone did that to him.

Deepak, a delivery worker, had no sympathy for the man’s actions. He said:

“Wrong is wrong. Where is the question of sympathy? He shouldn’t have done this. If someone gave you jhoota (half-eaten) food, would you eat it?”

Deepak may have stated that the Zomato worker was in the wrong but did say that the pay is not very good, especially as more people are being hired.

With food delivery companies hiring more people, this results in more competition when it comes to delivering orders.

More workers are trying to take on one order meaning that more people are left without a delivery which results in less money being earned.

Zomato has approximately 150,000 delivery people across India and Swiggy has around 100,000 active delivery partners.

The concept of app-based delivery is relatively new in India but has seen huge levels of growth in a short period.

As for the Zomato delivery driver, the debate continues as it could be seen that he should respect the work environment at all times. It could also be looked at that his salary is not enough for him to have proper meals.

Whatever the intention was, only the former Zomato employee can say his reasons for eating food which was meant for a customer.

Dhiren is a journalism graduate with a passion for gaming, watching films and sports. He also enjoys cooking from time to time. His motto is to “Live life one day at a time.”
Indian Christmas Finger Foods & Sweet Snacks to Enjoy
Gujarati Sweets and Savoury Snacks to Enjoy