Kim Kardashian’s Vogue India cover has sparked a huge outcry on social media, with many users accusing the popular magazine of ‘whitewashing’ and underrepresentation of Indian beauty.

"Look at the covers, it's always very fair models, where are the melanin rich beauties?"

Reality TV star and pop culture celebrity Kim Kardashian West has sparked a huge online debate yet again. This time it’s for appearing on the cover of Vogue India.

The American-Armenian star did an exclusive interview with the magazine for its March 2018 edition where she revealed much about her family life and the success of her reality show, Keeping Up With The Kardashians.

37-year-old Kim also did a full photo shoot for the editorial including two separate covers.

In the first cover, Kim dons a couture tulle saree-dress with looping hoodie designed by Jean Paul Gaultier. The bright red colour and matching accessories are a new direction for Kim, who is well-known for her nude-inspired styling.

In the second cover, we see her relaxing against a backdrop of roses in a sexy black dress designed by Philipp Plein.

Sharing the picture on her Instagram page, Kim amassed over 1.7 million likes in only a few days, with even Priyanka Chopra and Faryal Makhdoom liking the post. 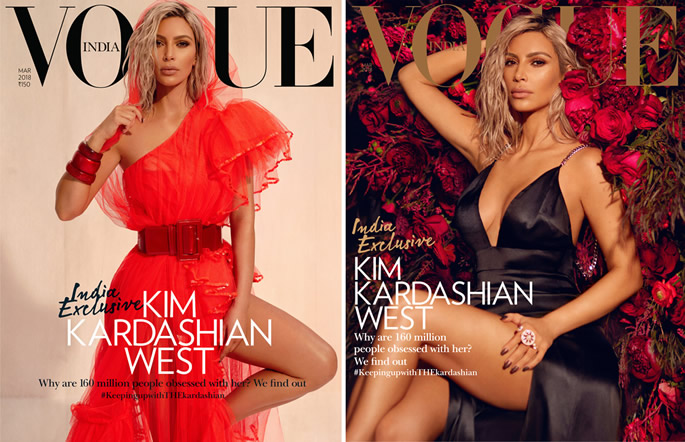 However, not everyone was happy to see the famous Kardashian on the cover of Vogue India. In fact, many online users began calling out the magazine for ‘whitewashing’ and underrepresenting ‘real’ Indian beauty.

“India has Rekha, Priyanka Chopra, and Aishwarya Rai and they get Kim Kardashian? Vogue India is truly trash and over for not acknowledging brown beauty.”

India has Rekha, Priyanka Chopra, and Aishwarya Rai and they get Kim Kardashian? Vogue India is truly trash and over for not acknowledging brown beauty.

Another user commented on the need to highlight Kim at all when she is such a prominent pop culture figure already:

I can’t believe @VOGUEIndia featured Kim Kardashian on their cover as if we don’t see her featured on a different magazine every day. India’s vogue should embrace and feature their own south Asian women instead of choosing someone from pop culture

For many of these users, the preference of a western star over ‘homegrown’ beauty was a concern, especially as it suggests that Vogue India may not be truly representing its Desi audience.

I have nothing against Kim Kardashian but @VOGUEIndia is really doing itself a disservice by continually neglecting to portrait brown women in their “magazine”— you’re perpetuating a detrimental cycle of underrepresentation. Stop white washing your own damn culture.

Others, however, felt that some of these reactions show double standards, arguing that magazines are free to promote international stars if they want to.

“So a magazine can ONLY have people from their country featured, i see ?. But if vogue usa or other country had an Indian girl you’d all be praising, idk is interesting hahaha. [sic]”

User Xmarksthespot5 commented on how some had been quick to judge Kim’s suitability to be in Vogue India through personal attacks on her character and calling her ‘trash’:

“Wow what happened to the women’s empowerment movement? so quick to judge and call someone trash. we only want to celebrate successful women who fit our “moral” values? and when do other vogue magazines get so much flack for featuring a cover from another ethnicity? the double standards are appalling and are moving us backwards instead of forward. [sic]”

With so much divided opinion regarding Kim’s appearance in the Indian magazine, some social media users admitted that the issue is not in the choice of Kim at all. In fact, the cover simply highlights an even deeper and underlying issue to do with on-going perceptions of Indian beauty:

As artcr_ash states: “The issue of the selection of Kim as your cover girl is disappointing but fine.

“The fact that RARELY is a medium or dark-skinned Indian woman featured on your cover, is abhorrent. You should be ashamed of yourself. What India do you think you’re representing? Certainly not the one that exists now.”

The promotion of fair skin as ‘true beauty’ has indeed been something that India’s fashion and entertainment industry has struggled with over many decades. We’ve grown up with fair-skinned actresses on our cinema screens and danced to songs about “goriness”.

Even traditional Desi mothers, aunts and grandmothers will have instilled a preference of lighter-skin over darker-skin. Yet, what this ‘colourism’ represents is a misconstruing of ‘real’ Indian men and women.

Colourism can be defined as “prejudice or discrimination against individuals with a dark skin tone, typically among people of the same ethnic or racial group.”

Today, while the bridge between ‘fairer’ skin and Desi skin tones may be narrowing, there is still a common perception that ‘white’ skin is something to aspire towards.

Perhaps it is ironic then that the Kim Kardashian Vogue India cover sees a very heavily-tanned Kim while some Desi mothers will be openly encouraging traditional skin whitening techniques on their daughters.

In one of the photos posted by the magazine, Kim wears a lehenga designed by Anita Dongre. The shot shows Kim looking away from the camera and holding her dupatta around her hips. 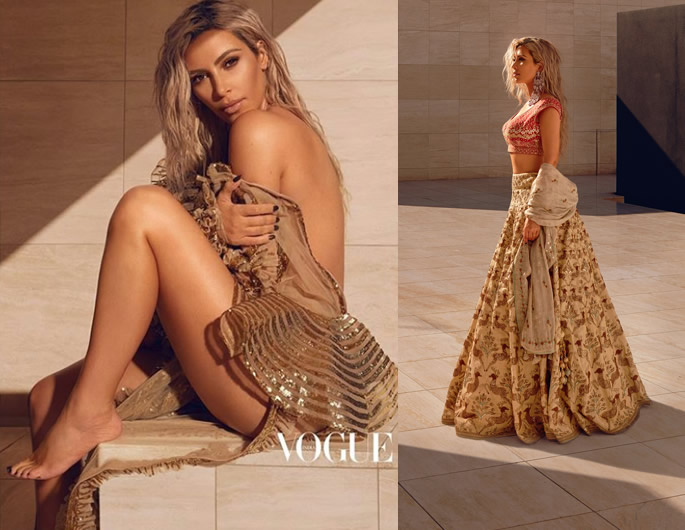 In her interview with the magazine’s Mira Jacob, Kim said: “The saris, the jewellery, the clothes—everything was so beautiful! I told my show that we have to figure out how to get to India.”

In response to this, user Ojasvy_ says:

“Kim looks gorgeous in the lehenga but in a country like India where there is a high rate of racism, name calling and dislike for darker shades of skin should we not have more diversity on the covers of such influential magazines?”

Cultural appropriation is another point of contention among users. Kim’s has been guilty of showing off her ignorance of other cultures in the past – take her recent “Bo Derek braids” as an example.

Some have pointed out that Kim doesn’t have many (if any) ties with India or its culture. In a past episode of KUWTK, she even revealed that she found Indian food “disgusting”.

Ana Sharma says: “The reason why a lot of people are angry isn’t her background but more because she’s huge for appropriating culture. Also, she’s done nothing for India, her article featured nothing on culture at all. it made no sense at all for Vogue India to feature her ? [sic]

“And above all, this further perpetuates the problem with colourism that exists in India. Look at the covers, it’s always very fair models, where are the melanin rich beauties?”

The last time Vogue India faced such comments was in May 2017 when they featured Kim’s half-sister Kendall Jenner on the cover. Being accused of not supporting Indian and Desi models enough, the magazine responded via a statement that read:

“In the last 10 years, Vogue India has had only 12 international covers, including Kendall Jenner in 2017.

“Therefore, statistically, 90 per cent of our covers are Indian! And we are proud of that. India has given the world so many beautiful faces to admire.

“After all, we are Vogue, an international brand, and we want to give the love back by featuring some of the best international celebrities on our covers. Occasionally!”

With this new magazine cover, Vogue India appears to be standing by its above statement. And they have chosen (as of yet) not to respond to the recent backlash.

Interestingly, they even turned off their comments under Kim’s pictures on Instagram for a short period of time. Seemingly, in an attempt to avoid further backlash.

However, this move sparked even more fury amongst users, with many accusing the magazine of protecting Kim Kardashian’s interests rather than that of their own readers.

Sonia K Sandhu asked: “Is Vogue India afraid of the backlash for putting a person like Kim Kardashian on the cover that they disabled their comments on her pictures?”

Mnmelon added: “U can’t fool us with turning off the comment section on Kim like shame on u ,,,, u got all these beautiful gorgeous girls n u choose that trash on ur cover come on India. [sic]”

While the magazine has since re-opened its comment section on Instagram, the real debate on Indian beauty continues.

Is the Indian beauty industry still guilty of showing a preference for light skin over dark? Or is there an on-going deeper cultural reasoning for colourism in South Asia?

Whatever the answer to these questions it appears that Desis, with or without the beauty industry’s backing, are ready to reclaim a truer representation of Indian beauty for themselves.