Kareena Kapoor Khan has reacted to Kim Kardashian’s outfit at the Met Gala.

The Bollywood actress was left scratching her head upon seeing what the reality star wore.

Kardashian wore all black with a black face covering along with Balenciaga designer Demna Gvasalia.

Posting a picture of them both to her Instagram story, Kapoor asked: “Kya ho raha hai?” or “What is happening?”

Kardashian’s get up has also led to a conspiracy theory after her sister Khloe Kardashian notably did not receive an invitation to the event.

Some online have suggested that the Met Gala attendee could possibly have been Khloe made to look like Kim after she was snubbed multiple times. 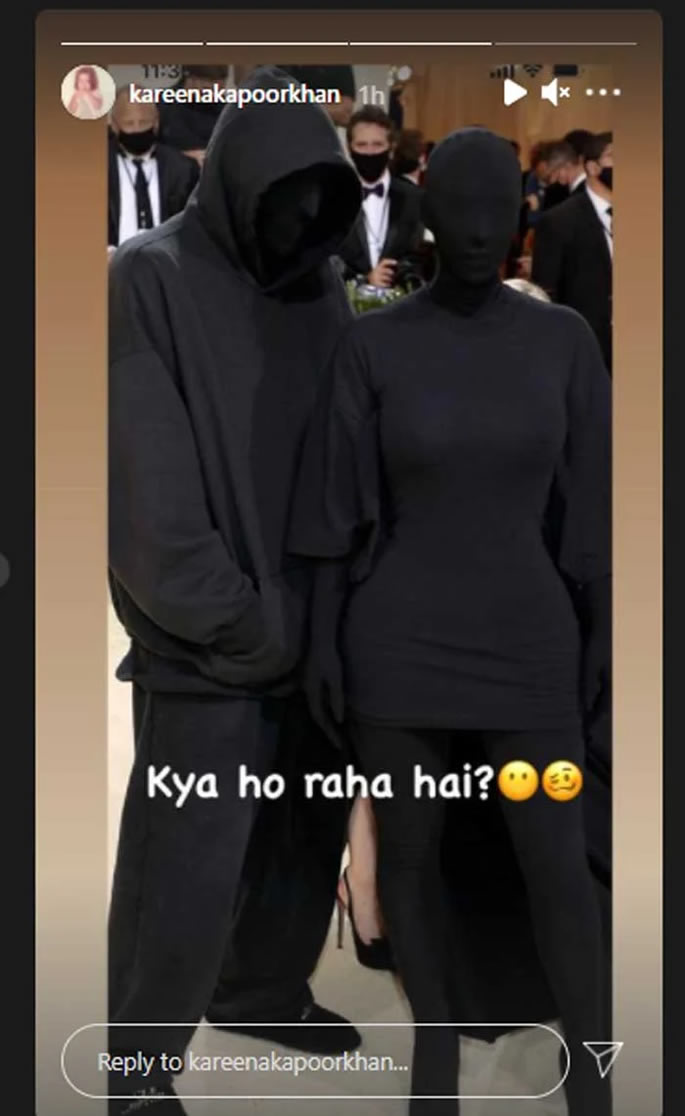 The Met Gala is hosted by Vogue editor Dame Anna Wintour at The Metropolitan Museum of Modern Art (MOMA) in New York City.

It takes place annually with each year given a specific theme, with 2021’s being ‘America: A Lexicon of Fashion.’

However, fans were quick to notice that Priyanka Chopra Jonas and husband Nick Jonas appeared to be missing from the red carpet.

Their absence is most likely because of Nick being on tour with the Jonas Brothers and performing in Chicago on the day of the event.

The couple made headlines during the last Met Gala in 2019 for Priyanka’s out-there outfit which triggered a meme uproar in India.

While it all began innocently, things took an extreme turn when politicians began creating memes of their own featuring political rivals.

Meanwhile, Kareena Kapoor KHan is currently wrapping things up on her upcoming movie, Laal Singh Chaddha which is due to be released on Christmas Eve 2021.

Also starring Aamir Khan, the film is a remake of Hollywood cult classic Forrest Gump with the eponymous character played by Tom Hanks.

This is Kareena’s first movie since starring in Angrezi Medium with late actor Irrfan Khan in 2020.

She has since given birth to her second baby with Saif Ali Khan, Jhe Ali Khan and released her pregnancy book.

She has also recently signed up to her first production venture with Hansal Mehta and Ekta Kapoor, a currently untitled thriller.

Naina is a journalist interested in Scottish Asian news. She enjoys reading, karate and independent cinema. Her motto is "Live like others don't so you can live like others won't."
Naseeruddin Shah compares Bollywood to Nazi Germany
Hassan Niazi reveals his Favourite Bollywood Heroines