‘Love Island’ contestant Priya Gopaldas has disclosed her earnings from the show. However, her revelation has been met with confusion.

Former Love Island star Priya Gopaldas recently revealed how much she got paid for her stint on the show.

However, her paycheck has left fans puzzled.

The 23-year-old recently took to her Instagram Story to reveal that she earned £750 for her appearance on Love Island.

The medical student also decided to donate the entire amount to the NHS.

She captioned the post: “Love Island pay cheque put to use.”

But fans were quickly confused about the date on Priya Gopaldas’ post. 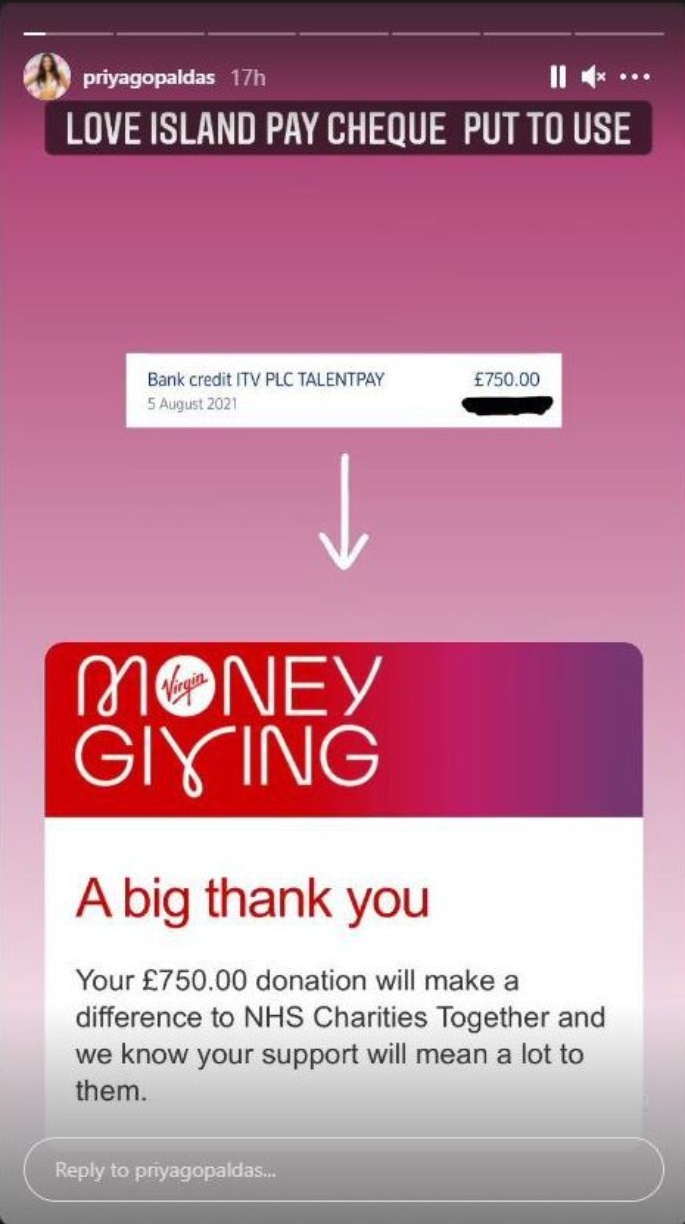 According to her Instagram Story, Priya was paid for her Love Island appearance on August 5, 2021.

Therefore, she appears to have received the money before Love Island bosses knew how long she would be on the show for.

According to reports, Love Island contestants are paid around £250 per week for their time in the villa.

The most recent Love Island series also required contestants to isolate in Majorca for two weeks before appearing on camera.

Priya Gopaldas entered the villa on day 42 and lasted a total of eight days.

Not only has the medical student sparked debate regarding her paycheck, but her decision to donate it to the NHS has also had fans talking.

Many Twitter users pointed out that Priya’s donation highlights how the NHS is not properly funded and would be if the Conservatives were not in power.

The NHS isn’t a charity. Good for her but let’s not normalise funding the NHS through private donations.

One user said: “The NHS isn’t a charity. Good for her but let’s not normalise funding the NHS through private donations.”

Users also slammed Priya for being a hypocrite, as she is rumoured to favour the Conservative Party.

One user wrote: “A Tory looking at the NHS as a charity.”

Another commented: “Nice thought but the NHS would be better off if she stopped voting tory.”

Others also criticised the former Love Island star for posting about her selfless deed on social media, claiming she only did it for attention.

“Why did she feel the need to ‘reveal’ it? Is she looking for a medal or a boohoo deal?”

“Would absolutely be a baller move if she didn’t tell people about it.”

A third said: “Not an obvious attempt to get some good publicity and stay in the limelight after lasting a week on the show and coming out to see everyone knows you’re a Tory – self-serving exercise.

“Do your good deeds in silence.”

Clearly, the other possible reason behind Priya Gopaldas’ decision to donate to the NHS – the fact she will soon be a doctor – has been severely overlooked.