In the run-up to Padmavati’s release, Deepika Padukone faces threats from various Hindu groups for the film’s portrayal of the famous Rani.

"Bhansali has raised a question on her courage by showing her in a bad light in his film."

Not only have they placed a bounty on her, but also threatened to cut her nose off.

In particular, the groups feel Padmavati has been dishonoured because the film suggests she had a romance with Alauddin Khilji (played by Ranveer Singh), a Muslim. Whilst still married to Hindu king, Maharawal Ratan Singh (played By Shahid Kapoor).

The founder of Shree Rajput Karni Sena, Lokendra Singh Kalvi, argued: “In no book is it written that Alauddin Khilji fell in love with Padmavati or he was her lover.”

As a result, protestors have vandalised sets, including the historical Jaipur Fort. They even attacked director Sanjay Leela Bhansali in January 2017.

“Rajputs never raise a hand to women but if need be, we will do to Deepika what Lakshman did to Shurpanakha.”

His reference links to a legend which shows a demon princess punished by having her nose chopped off.

“Anyone who brings the head of Sanjay Leela Bhansali and Deepika Padukone will be rewarded with Rs 5 crore.

“Padmavati had sacrificed her life with 12,000 other women in mass immolation (Jauhar) and Bhansali has raised a question on her courage by showing her in a bad light in his film.”

However, Times of India since reported that police have filed a complaint against Thakur Som. 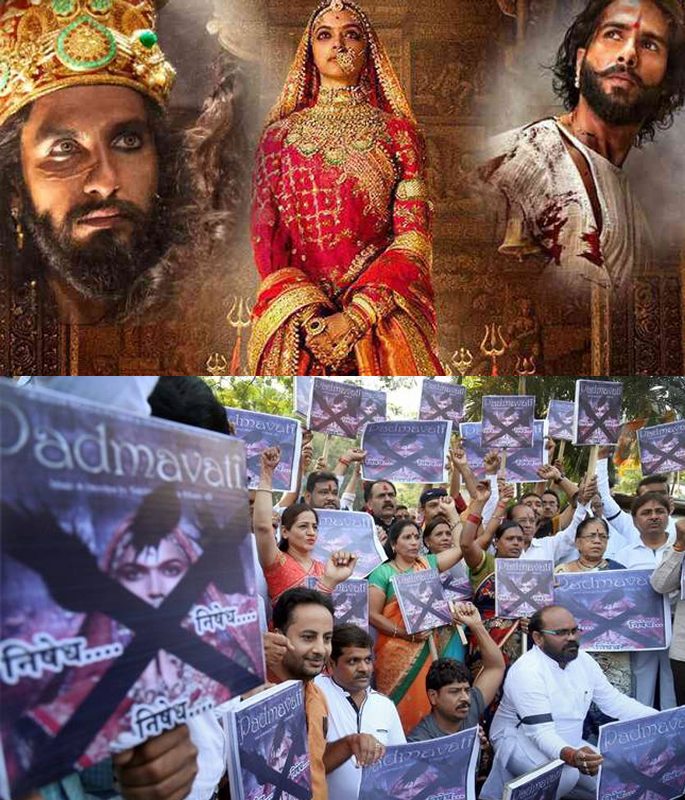 With these violent threats, Mumbai police have decided to step up security for Deepika. They confirmed this news and said:

“We are providing her adequate security after the threat. The police will provide security at her residence as well as her office.”

Since Padmavati’s production, it has faced hostile controversy from Hindu groups. They claim that it portrays historical inaccuracies on the fable about the 14th century queen.

He has requested the Central Board of Film Certification to push the film’s release date forward. The director also hopes to hold a pre-screening to stop the controversy.

Deepika herself has commented on the protests: “It’s appalling, it’s absolutely appalling. What have we gotten ourselves into?” Adding:

“Where have we reached as a nation? We have regressed. The only people we are answerable to is the censor board, and I know and I believe that nothing can stop the release of this film.”

“Cine actress Deepika Padukone giving us lecture on regression!! Nation can progress only when it is regression from her perspective. (sic)”

Being completely unfazed by the threats Deepika said:
“I have full faith in the judicial system of our country. I know no wrong will be done.”

On Twitter, many stars have reached out to Deepika, supporting her. Indeed, many will feel shocked by the increasing level of these troubles.

The Chief Minister of Rajasthan, Vasundhara Raje has also added to the protest against Padmavati, Smriti Irani, the Union Information and Broadcasting Minister, only ‘allow’ the movie be released after making the necessary changes as demanded by the “aggrieved community” of the Rajputs. She’s the first Chief Minister to have complained openly about the forthcoming film.

The Indian government have placed riot police on alert for the 1st December. As the release date approaches, many will keep a close eye on how audiences take to the film.