Five of the UK’s top Indian restaurants compete against one another on BBC Two’s ‘Britain’s Top Takeaways’.

"It was a remarkable experience. It was incredible."

Five of the UK’s top Indian restaurants will compete in a battle of the spices on BBC Two’s Britain’s Top Takeaways.

The episode will be broadcast on May 10, 2022, and is part of an eight-episode series presented by Radio 2 host Sara Cox and comedian Darren Harriott.

Each episode will see five of the UK’s best restaurants in a particular cuisine face off against each other.

The Indian restaurants are part of the second episode and fabulous dishes from across South Asia are cooked up to see which one is the best.

Judging the Indian cuisine and deciding who wins are a host of takeaway-loving families who eat, rate and score the food from the comfort of their dining table or sofa alongside the guest judges, Manchester Village Spartans Rugby Club.

But which Indian restaurants are on the show. We find out. 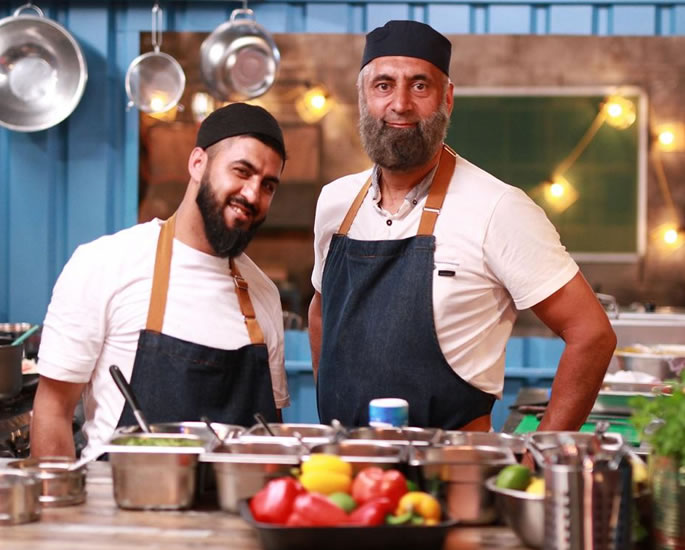 Representing Bradford is Sweet Centre Restaurant and it is run by chefs Waqar Mughal and Hamayun Arshad.

Waqar’s grandfather set up the business in 1964 and he said being on Britain’s Top Takeaways was a great experience to test themselves against fellow South Asian restaurants.

Speaking about being on the show, Waqar said:

“It’s humungous for Yorkshire and for us.

“It was a great experience for us to be on the TV. It was a remarkable experience. It was incredible.

“It was very intense with the time constraints.

“We have contributed a lot to the city since we opened in the early 1960s.

“Sara and Darren were really fun to work with. Sara is a northern lass and knew all about Yorkshire curry.

“There were quite a few places and food that we needed to make food for. We had to make some starters, main course, vegetarian dishes and sundries.” 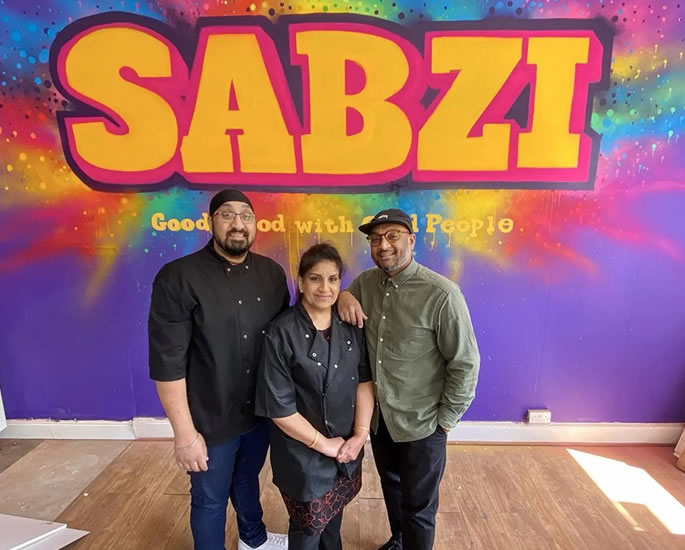 Edinburgh favourite Sabzi will be on the show and it is owned by Stevie Singh, his brother and Ryan and their mother Paula.

For filming, they were asked to design a menu that featured a classic option, a special, a veggie dish and two sides.

They plan to also offer some of these dishes on the menu, on the week of the show’s airing.

Since filming Britain’s Top Takeaways, it has been an exciting time for Sabzi.

Stevie said: “The last year or so has been an incredible rollercoaster of emotions, both in our personal and work lives.

“We’ve learned lots about ourselves and each other. Prior to Sabzi, as a family, we’d never really worked together this much so there were some concerns, but we’ve rolled with it and we’re loving it.

“We always remind ourselves to keep moving forward which keeps us motivated and wanting to be better.”

“Sabzi wouldn’t be where it is without mum. She’ll kill us for saying this but she’s turning 60 this year, so we’ll be taking some time off for that which we’re really looking forward to.” 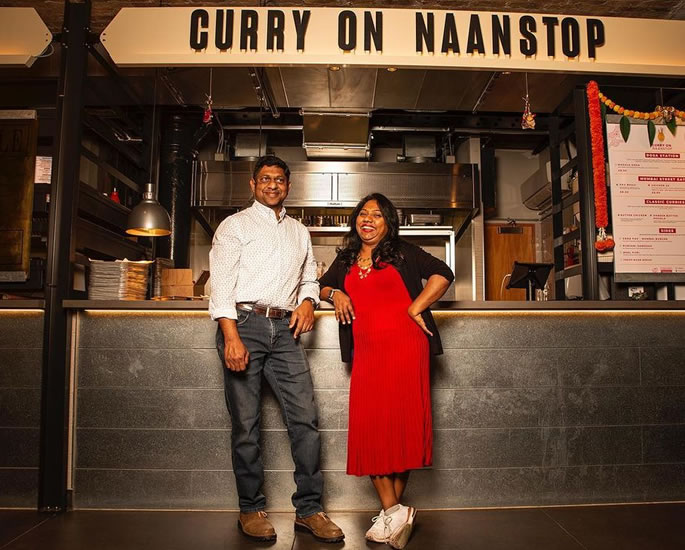 Married couple Swati and Karthikk are the creators of London-based Curry on Naanstop.

They moved to England from India and both had high-flying careers.

However, they missed homecooked food and could not find anything comparable.

After learning to cook her family recipes via Skype, Swati realised cooking and serving food to family and friends was a big part of her passion and she wanted to share those flavours with everyone.

Curry on Naanstop was then born, serving up delicious and authentic Mumbai street food. 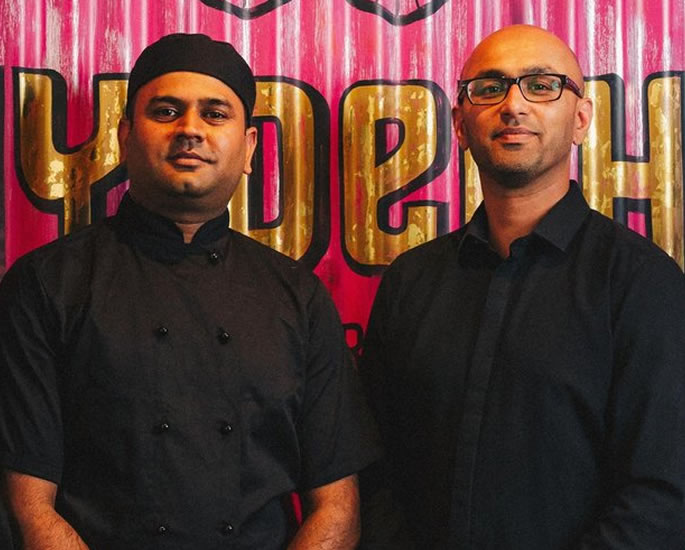 Flying the flag for the North East is My Delhi.

“We couldn’t believe it when the producers contacted us last year to appear on the show.

“We introduced our Express Takeaway service during the pandemic to allow our diners to continue to enjoy our delicious authentic Indian food from home.

“For that to then lead to this show is just incredible and big thanks to our diners for all their support.

“We really enjoyed being part of the show and competing with some fantastic eateries. It was an unforgettable experience.

“It’s going to be a brilliant show and we’re proud to be flying the flag for the North East.”

Executive Chef Gaurav Dayal said: “For chefs, these moments are an ultimate test of your skills.

“Even choosing the dishes for the menu that you’re going to present on a national TV show was a challenge in itself.

“In the end, we went with the dishes that our diners love the most, Butter Chicken 1950s, Railway Station Lamb Curry and Cauliflower Manchurian.

“We never got to see what the households thought of our food so I’m looking forward to watching their reactions for the first time.”

The Indians Next Door 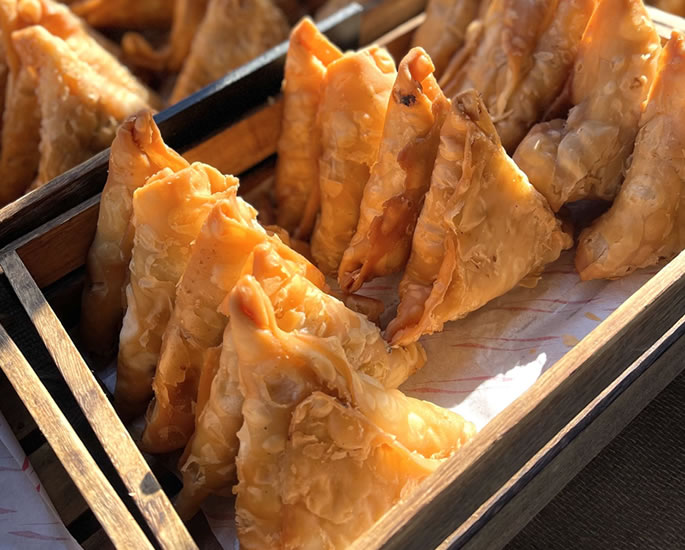 The Indians Next Door has a number of locations across London and it is run by mother and daughter Hasmita and Sivani.

The restaurant specialises in Kenyan-Indian food and it all started in the 1920s when the family moved from Gujarat to Kenya’s capital Nairobi.

They uprooted themselves from their small rural village taking with them a rich culture, religion and most importantly food!

Whilst in Kenya, they joined the already existing Indian community and lived alongside Punjabi people and together they shared their recipes and cooking techniques.

Traditional Indian cooking evolved to incorporate the best of Gujarati, Punjabi and Kenyan cuisine and it is what The Indians Next Door are known for.

“When I first heard about this show they had me at takeaway.

“Especially in recent times, the takeaway has become something of an event in our house. We look forward to burgers, noodles, curry – all delicious and delivered to our front door.

“I’m thrilled to be celebrating the takeaway and finding the very best in Britain, and if that means eating all the leftover chips and putting on half a stone, so be it.”

Dhiren is a journalism graduate with a passion for gaming, watching films and sports. He also enjoys cooking from time to time. His motto is to “Live life one day at a time.”
Akshay Kumar fights his Enemies in Prithviraj Trailer
Are Ranveer & Deepika expecting their First Child?