New reports from the Foods Standards Agency (FSA) and Which? have found that much of the meat that we consume at our local takeaway is actually contaminated and adulterated.

If contaminated or mislabelled foods are found, takeaway owners could face a £5,000 fine.

With so many food related scandals cropping up around the UK – from horse meat to suspect doner meat contents – a new investigation has uncovered startling news that the meat we are eating at our local fast food joint may not be the meat you thought it was at all.

New reports suggest that meat claiming to be lamb in a number of takeaways in Birmingham are false. A series of investigations, carried out by the Foods Standards Agency (FSA) and the consumer watchdog, Which? discovered contaminated meat in a considerable number of takeaway samples they tested.

The FSA underwent a significant inquiry, which scoured a number of London and Birmingham takeaways to find out what owners are actually selling to their customers. 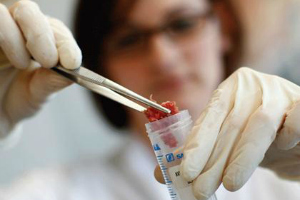 They discovered that in 145 samples of lamb curries or kebabs taken between July and December 2013, 43 contained significant levels of meat other than lamb. 25 samples actually contained no lamb at all and only beef.

The Which? survey, found that 24 of the 60 samples they tested were contaminated, with 7 containing no lamb at all.

The British Asian community seems to be at risk the most – with so many takeaways across Birmingham all offering lamb burgers, chicken meals and doner kebabs – all at a cheap price for a quick lunch or dinner, consumers are beginning to get more and more concerned about the kind of food they are eating. These include halal and non-halal outlets.

Abdul, one 20-year-old British Asian from Small Heath says: “I eat takeaway food almost everyday. It never really crossed my mind that what I was eating was not actually the meat I was paying for.” 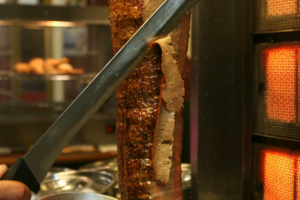 The Executive Director for Which?, Richard Lloyd says: “More than a year on from the horse meat scandal, our research uncovers shocking evidence of food fraud.

“The Government, local authorities and the FSA need to make tackling food fraud a priority and take tougher action to crack down on the offenders. This is vital to restoring trust in the industry, which is not only good for consumers but good for businesses too,” he adds.

But are these cases of contamination such a big shock for British consumers? The Director of the Institute for Global Food Security, Chris Elliot says:

“The survey results come as no great surprise to me. Whenever issues about food contamination and adulteration are looked for in a serious way they are found.”

Fast food and takeaways have in the last decade become one of the leading global diets. In the UK alone, this industry is thought to be growing at 41 per cent each year. Britain’s favourite takeaways are Chinese, closely followed by Indian with each person spending on average £110 on takeaways each month.

With so many different types of food now available, takeaway owners are making huge sums from enticing customers to buy cheap and cheerful meals.

Another British Asian mother, Jas, says: “I stopped my kids from eating takeaway food after I found out what they put in doner meat. It’s disgusting when you think about. These places can’t be trusted.”

Earlier in 2014, mislabelled foods were a common feature in West Yorkshire as almost one third of foods were tested and found to be adulterated. In Leicester, numerous meat products, almost 50 per cent, were also contaminated.

The Chief Operating Officer of FSA, Andrew Rhodes says: “Substitution of lamb for cheaper meats in takeaway food is unacceptable and we are working closely with local authorities to ensure robust action is taken against any businesses misleading their customers. 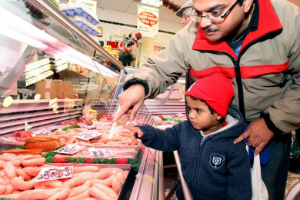 “Prosecutions have taken place against business owners for mislabelling lamb dishes, but the recurring nature of the problem shows there needs to be a renewed effort to tackle this problem. Clearly the message isn’t getting through to some businesses,” Rhodes adds.

According to the FSA, local authorities will now be expected to start checking food samples in takeaways from May 2014 onwards. A meat product is considered adulterated if it contains more than 5 per cent of another meat.

If contaminated or mislabelled foods are continued to be found, takeaway owners could face a £5,000 fine.

But with increasing uncertainty of processed foods in supermarkets and now meat sold in takeaways, consumer trust is beginning to fall at the wayside. Can the general public be completely sure what they buy is authentic? With higher levels of quality control now being enforced, it seems some food manufacturers will have to find other means of producing cheap and easy processed food.

Nazhat is an ambitious 'Desi' woman with interests in news and lifestyle. As a writer with a determined journalistic flair, she firmly believes in the motto "an investment in knowledge pays the best interest," by Benjamin Franklin.
Winners of the Asian Business Awards 2014
University Life for British Asians