Large Drug Cartel uncovered in US with Bollywood Links

One of the biggest drug cartel operations has been uncovered by the DEA which has links to India’s Dawood underworld and Bollywood actresses.

Ali Punjani has actually been spotted in Mumbai

America’s Drug Enforcement Agency (DEA) has unearthed one of the biggest drug rackets, which has a major Indian connection and links to Bollywood.

An investigation report has been filed by the DEA in New York and specifically mentions the connections back to India and its underworld.

A former associate of underworld kingpin Dawood Ibrahim and a pharmaceutical company allegedly operating from India are reportedly linked to manufacturing drugs like mandrax and ephedrine.

The Bollywood connection is related to the husbands of two former actresses, charged with international drug trafficking originating from Kenya.

The report was filed at the United States District Court, Southern District of New York on July 25, 2019, and states the name of the Dawood Company associate Vicky Goswami, husband of Bollywood actress Mamta Kulkarni and Ali Punjani, the ex-husband of Bollywood star Kim Sharma.

Ali Punjani has actually been spotted in Mumbai, in Bandra’s Asian Heart Institute in the last week of August 2019, indicating he is no longer residing in Kenya.

Kenyan police in Mobassa have confirmed that Punjani is wanted for his involvement in a drugs case and are pursuing the route via Interpol to detain Punjani in India for his crime.

The DEA report highlights that druglord Vicky Goswami who works for the Dawood Company in South Africa moved to Kenya and there he smuggled very large quantities of heroin, cocaine, mandrax, ephedrine and hashish.

Initially, in Kenya, Goswami was working for the Ibrahim Akasha syndicate in Mombasa. He later then created a partnership with Ali Punjani, an alleged drug lord and husband of actress Kim Sharma.

Goswami, a Dawood aide and the husband of actress Mamta Kulkarni, is then mentioned in the report as having been sentenced in a Dubai court on drug-related charges. In 2013, after he was released it was then he moved to Kenya to commence the operation with Ali Punjani. 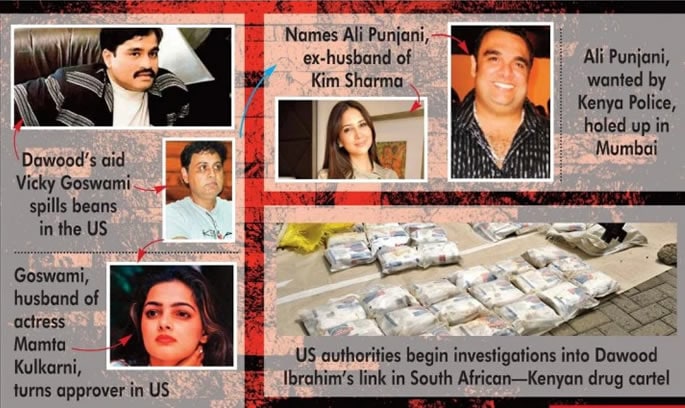 An Indian doctor by the name of Dr Bipin Panchal was approached by Goswami in Mombasa and after a meeting between them, Dr Panchal assured Goswami that he will help organise the supply of ephedrine from a pharmaceutical company in India.

Dr Panchal told Goswami that the consignment of ephedrine from India would then be taken to Uganda, where it would be converted into methamphetamine.

The DEA report reveals that the Indian company responsible for manufacturing ephedrine was checked and confirmed but it has been shut down. No name of the company is stated in the report.

A sting operation was launched by undercover DEA agents which recorded a drug deal taking place between Goswami and Ibrahim Akasha.

Using the evidence, the DEA nabbed Goswami and members of the Akasha syndicate and arrested them in Mombasa. They were then later extradited to the US.

After this, Goswami co-operated with the DEA and revealed details about the kingpin of the Akasha syndicate.

Goswami also gave up names of drug dealers in South Africa with many of them having close ties with Dawood Ibrahim gang.

Currently, efforts are being made by Kenyan police via Interpol to arrest Ali Punjani who was last reported as having surgery in a Mumbai hospital.

However, as of now, Mumbai police say that Ali Punjani is not wanted for any case in Mumbai, therefore, no legal action can be taken against him.

Amit enjoys creative challenges and uses writing as a tool for revelation. He has major interest in news, current affairs, trends and cinema. He likes the quote: "Nothing in fine print is ever good news."
UK to Extend Work Visa for International Students
Indian Girl dumped in Sugarcane Fire for Not Marrying Lover