Tamasha’s incredible production, My Name Is… is written by Sudha Bhuchar. Based on the true story of British Asian school girl Molly Campbell, DESIblitz chats to Sudha to find out more.

"British society is changing and mixed race relationships are on the increase."

Under the banner of Tamasha, writer and actor Sudha Bhuchar brings audiences a compelling play about British Asian identity and the polarised perceptions of the media.

My Name Is… is based on the true story of schoolgirl Molly Campbell who fled to Pakistan, after, in the media’s eyes, she had appeared to be ‘abducted’ by her father.

In an exclusive Gupshup with DESIblitz, Sudha tell us more about the play and it’s relevance to modern day Britain.

What was the inspiration behind My Name Is…? 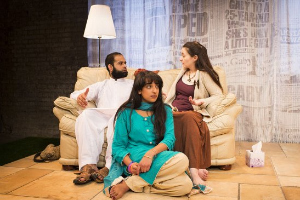 “In June 2007, a wonderful article by Cathy Scott-Clark and Adrian Levy caught my eye and drew me [to Molly’s story].

Cathy and Adrian gave a more nuanced picture; a real ‘story behind the story’ which went back to the point when the girl’s parents first met in the early eighties, when the mother was fifteen and the father in his early twenties.

“I was fascinated and immediately felt personally drawn to the family and what they had lived through.

This personal story seemed to mirror the story of our times and the relationships between the communities that make up multicultural Britain and how that relationship has changed and shifted over time.”

Are Asians more accepting of cross-cultural love than they used to be? 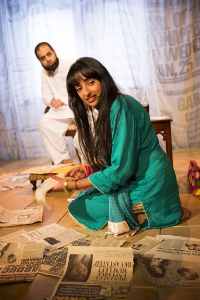 “We all know that British society is changing and mixed race/religion relationships are on the increase. There can still be a huge pressure on such unions and children of mixed heritage can walk a tightrope in trying to gain acceptance.

“This story revealed a picture of two young people who had simply fallen in love and then with faith and courage took on a life together involving compromise and religious conversion on the part of the mother to try to gain acceptance from the wider communities.

“The sacrifices they made transformed them irrevocably and, fifteen years and four children later, they were no longer the people they were when they fell in love and their fragile ties broke apart.

“At a time when the world is getting smaller, more and more people are taking their strength from defined identities and difference. Families like this are forging new frontiers and finding ways of coming to terms with the multiple realities they inhabit.”

Do you think the media aids or damages perceptions of British Asians in their community?

“After the initial ‘Islam vs the West’ headlines that accused the ‘fundamentalist’ father of kidnapping her, the media was forced to change tack when the girl emerged in the glare of the media in Pakistan and publicly declared that she had fled of her own accord and wanted to live with her father and siblings.

“The easy ‘photofits’ of the parents changed from ‘jihadi tyrant’ to ‘loving father’, ‘distraught mother’ to ‘unfit mother’, and went back and forth as the media debated where to point the finger of blame.

“The media tends to reduce lives in a polarised; us against them, and I wanted to show the people in their own words against a framework of the headlines that professed to ‘capture’ the ‘real’ story.” 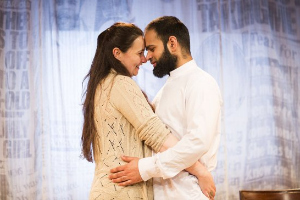 “It has been fantastic working with Philip Osment, the director and my long-term mentor.

“We had a great creative team including Arun Ghosh, the composer, Miriam Nabarro who designed a simple set reflecting their two different worlds in Scotland and Pakistan as well as the presence of the media, and Ian Scott’s lighting design.

“The cast have become a great ensemble and have managed to keep the piece fresh and get the right balance between the humour and the poignancy.”

Did you speak to Molly Campbell about the play?

“[Yes] I found the family very open and willing to share their experiences and by then they had been global news, and were very keen to set the record straight about how they had been depicted in the media and how they felt they had been misrepresented.

“I decided to craft the play from the interviews themselves and to highlight the simplicity and honesty with which they were conveyed to me and to leave out any embroidery. 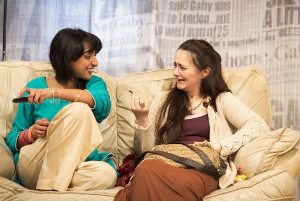 “The father has not seen it as he is in Pakistan but Molly and Louise have seen the play three times.

“There has been a lot of shared laughter and tears. Louise has expressed how it felt to hear her words being gifted back to her and it was nice for her to see the good things that Sajad said about her and their early life together that started from being in love.

“Similarly Molly was touched by seeing her ‘parents’ on stage being close, as in real life she doesn’t have a memory of them together.

She also felt that seeing her twelve year old self on stage made her lift her sense of guilt in some way as she had always felt that she let her mother down. The play made her see herself as an ‘innocent’.”

Sudha mentions that she has received an excellent reaction from British Asian audiences already, with many feeling drawn to both the mother and father characters rather than taking sides.

Having already had a successful run through Oxford, London and Leicester, My Name Is… will be showing at Birmingham’s mac on October 2nd 2014, and finally Manchester’s Contact Theatre between October 8 and 11, 2014. For more details, please visit the Tamasha website.

Aisha is an editor and a creative writer. Her passions include music, theatre, art and reading. Her motto is “Life is too short, so eat dessert first!”
Sephi Bergerson photographs Behind the Indian Veil
Birmingham Literature Festival 2014 Preview