Snookered produced by the Tamasha Theatre Company is a new and raw British Asian play to tour theatres across the UK. Written by amateur Ishy Din, the play explores the complex relationships of ordinary British Asians.

"I want to tell stories about real people from that [British Asian] community."

Tamasha Theatre Company renowned for its Asian plays, presents us with Snookered.

The play revolves around a group of ordinary British Asian guys. These four guys meet up once a year on the anniversary of their friends death to play a game of pool.

The more they play and drink alcohol, the more they open up to each other. Secrets begin to reveal themselves and tensions start to rise. Friendships and relationships all come under strain. With some attempting to escape their past.

The production was conceived by cab-driver turned playwright, Ishy Din. Ishy took inspiration from his own personal life and the lives of those around him. 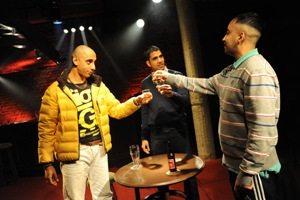 The play offers a keen insight into the lives and heartaches of ordinary Asians living in Britain today. This is something that is rarely shown on a theatre stage. Cultural expectations come face to face with personal dreams and ambitions. Experiences which any British-born Asian can easily relate to.

Speaking about his inspiration behind the play, Ishy says:

“There are certainly parts of it that are autobiographical, I think that to make any character honest and real one needs to put ones own experiences, both emotional and physical, into them but then you also have to make the piece dramatic so once the characters were in place I had to find a journey for each character that would heighten the drama.”

“Because it’s a world that I know really well finding inspiration for character and story was pretty straight forward and I’d always wanted to write something about working class northern British Asian me,” Ishy adds.

As well as it’s unique perspective on British Asian lifestyle, the play is more of a success story for Ishy than anything else.

It is the first play to be written by him. In fact, the storyline was conceived while Ishy was taking part in a new writing course held by Tamasha. 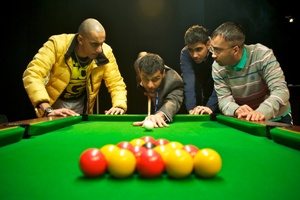 “Luckily for me a number of things happened around the same time, of course firstly I was on the Tamasha writing course in London, not knowing many people meant that on an evening I would return to my backpackers hostel and out of sheer boredom I’d write short scenes which were usually set in a pub…that’s when really the idea came to me about writing something about some friends playing pool and getting drunk.”

For Ishy, honing in on the realities that people face, especially by the British Asian community, regardless of faith or religion was paramount:

“I want to tell stories about real people from that community, because our lives aren’t about fundamentalism or honour. We’re just regular people who worry about how to pay our mortgages and bring our kids up.”

Tamasha Developing Artists has encouraged and trained a wide variety of actors, writers and performers since it began in 2004, Ishy being a classic example:

“I am a writer and without Tamasha I’d still be a taxi driver. My voice as a northern Asian would be muted and my attempts to open a window on a largely unexplored world would be firmly shut.”

The theatre company itself strives to provide the crossover for new artists who would find it difficult to find recognition. It has been responsible for successes such as East is East, Strictly Dandia and The Trouble with Asian Men over its 23-year history. 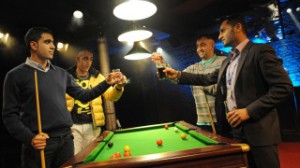 Snookered is the first of a trilogy of productions that Ishy is preparing with Tamasha. Ishy has no shortage of ideas for his next venture. Speaking about his two years spent as a cab driver, Ishy remarks:

“I’ve been a cabbie a long time. I sat and worked out one night that I’d had 160,000 conversations with people. The minute they step out of my cab I pick up my pad and start scribbling things down.”

The plays stars theatre actors, Jaz Deol, Asif Khan, Muzz Khan, Michael Luxton and Peter Singh. It is directed by Iqbal Khan who most recently directed Much Ado About Nothing for the Royal Shakespeare Company in 2012.

The play has been very well-received across the theatre board, with Ishy getting much praise from award-winning playwright Simon Stephens and director Richard Eyre.

Snookered is currently touring at various theatre venues across the UK.

Aisha is an editor and a creative writer. Her passions include music, theatre, art and reading. Her motto is “Life is too short, so eat dessert first!”
Leela Soma ~ Scotland’s Asian Writer
India’s Pranava Prakash talks Bollywood and Art