Behind the Indian Veil: Weddings in India is an exquisite coffee table book about wedding photography in India. DESIblitz chats to Sephi Bergerson to find out more about the crowdfunded project.

From his time there, he has created a stunning coffee table book called, Behind The Indian Veil: Weddings in India.

The book he explains is: “A visual exploration of the definition of the term ‘Indian Wedding’.”

In an exclusive Gupshup with DESIblitz, Sephi tells us more.

What inspired you to travel across India and photograph weddings? 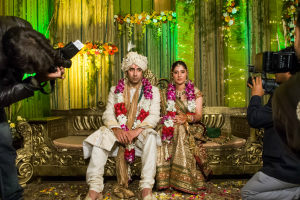 “When I finished working on Street Food of India at the end of 2007, a friend had asked me to photograph her sister’s wedding in Kerala: “I am not a wedding photographer,” I said, to which she replied that this is exactly why she wants me to do it. I agreed.

“This started a huge excitement and got me thinking of it as a subject. By the time I was going to Kerala I had already identified a Tamil Brahmin wedding in Chennai as a starting point for the project. I had no idea what I was getting into.

“The TamBram wedding took more than four hours and I could not be sure which ‘svaha’ was the important one so I kept shooting like mad. I wanted to find out what the term ‘Indian Wedding’ means and this became a visual exploration of this fantastic cultural celebration.”

Is Marriage an inherent part of the cultural fabric of India? 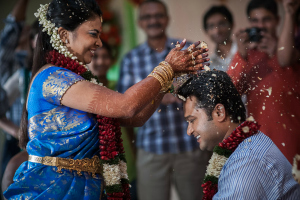 “Marriage is a big thing everywhere in the world but it is probably even bigger in India. I remember when I just arrived in India in 2002 I sat with someone I met and he said that Indians spend money on three things; home, gold and weddings.

“People save their entire life to have enough for their daughter’s wedding. I don’t think it is this big in other places. The system of pre-arranged marriages is another incredible part of it. The papers are full with matrimonial ads for various communities. It can be difficult for a westerner to understand but it seems the system works.”

“I personally like the more traditional ones but my work takes me to palaces another amazing locations. I do feel that in the race to impress people forget that a wedding is mostly about two people and about emotions and deep feelings.

“With the changes in India and the money coming in this is sometimes overcome by huge productions. This is not entirely a bad thing if you look at it from the point of view of distribution of the wealth.

“An extravagant wedding provides employment to hundreds of people so in a way this is a good way for money to filter down in society.”

What stood out most for you about the differing styles and traditions that many Indian weddings have?

“There is no way to describe an Indian wedding. Not even one little thing that is similar to all the traditions in India. You must experience it to understand it. It was an incredible journey as I managed to see things I could not have imagined existed.”

“Being a foreigner in India can be quite challenging at times, but it also has enormous advantages.

“As I traveled throughout India, I was invited into sacred places and intimate moments normally inaccessible to outsiders. The incredible array of stories I was able to capture reveals cultures, traditions, and legacies as complex and diverse as India herself.”

Which was your favourite wedding to photograph? 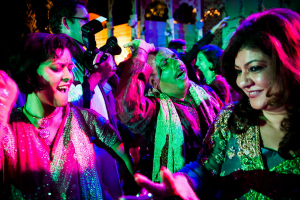 “I have really been blessed and witnessed so many amazing weddings. Naturally the more remote ones, the less talked about like the Buddhist wedding in Ladakh or a mass wedding of the Dawoodi Bhora community where 340 couples married in one day would be easy picks.

“Punjabi weddings are super amazing. These people certainly know how to party. Bengali weddings have so many beautiful aspects. I can really find beauty in all of this tamasha.

“I have attended a wedding in Andra Pradesh once and wanted to know what to expect. I asked the bride what is going to be different in this wedding than in other I had seen before. “Nothing” she said, “it is just another Indian wedding”.

“It was nothing like I’ve ever seen before of course. It would be same for every step along this journey and what I found so amazing while making this book.”

How will you publish Behind the Indian Veil?

“Behind The Indian Veil is a crowdfunding project. Online tools enable an artist to market effectively on his own and knowledge is out there for free. Publishers today tend to take fewer risks with new titles and will often ask the author to raise the money for production.

“I feel it is time for photographers to know it is possible to take the power of our images back into our own hands and self publish. It is somewhat like so many musicians today produce their own albums outside of the mainstream corporate world of record companies. You need a lot of money to do it but the outcome is that they have control of their work.”

You can support Sephi’s project Behind the Indian Veil: Weddings in India on his crowdfunding page, or his book website. Sephi has also just launched a new website about wedding photography in India. The book funding campaign will end on October 11th, 2014.