With its European premiere at the London Indian Film Festival, DESIblitz are proud to announce we are Q&A sponsors for the hilariously relevant independent film, Sulemani Keeda. We chat exclusively with film’s director, Amit V Masurkar.

"If you enter any café or pub here, you'll find people hustling and peddling their dreams."

Screening at the London Indian Film Festival 2014, Sulemani Keeda is a light-hearted take on the inner world of the Bollywood film industry. Both hilarious and current, the independent film is directed by Amit V Masurkar and stars the talented Naveen Kasturia, Mayank Tewari and Aditi Vasudev.

In an exclusive Gupshup with DESIblitz, director Amit describes his film as a ‘slacker comedy’. Playing two young screenwriters, Kasturia and Tewari are aspiring to make a name in the big competitive world of Indian cinema but with very little luck.

Set across several days, the duo find themselves fleeting between writing shorts and poetic verses while simultaneously attempting to get laid: 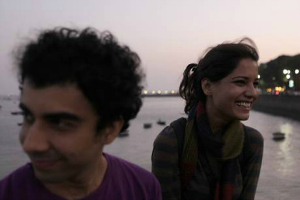 “They are migrants from smaller towns near Delhi, like most young minds working in the film industry. They live in the suburbs of Mumbai in a locality called Versova which is full of filmmakers, actors and writers.

“If you enter any café or pub here, you’ll find people hustling and peddling their dreams. I am one of those people. The themes in the film are universally relevant: the anxiety of living in a fast paced city, the fear of hopes and dreams getting crushed, the insecurity of not having figured out one’s real purpose in life,” Amit tells us.

Finally, they are offered a script idea from a wannabe film maker and a window into the world they have been dreaming of opens.

One of the writers however is faced with a dilemma, he is in love with a girl who is on the verge of leaving India. Will he stay and fulfil his dream or go and make his own love story a reality?

Both written and directed by him, Amit chooses to connect the audience through the writer’s eyes, and away from the glamorous actors and directors who are the face of the film. 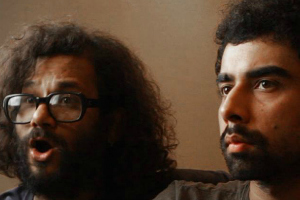 While not a biographical story, Amit does use his own experiences and the experiences of the lead actors to present a more realistic account of working in the Bollywood industry. It is perhaps even more apt then that Sulemani Keeda is Amit’s directorial debut.

Amit began his showbiz career as a staff writer for The Great Indian Comedy Show. Some years later Amit moved into film and contributed to the screenplay of Char Din Ko Chandni (2012) and Murder 3 (2013).

Amit mentions happened upon the idea of Sulemani Keeda after meeting and working with the two lead actors, Naveen Kasturia and Mayank Tewari.

As Amit tells us, much of the screenplay was written with the pair in mind – as the pair share a great chemistry and friendship both on screen and off. As individuals, Kasturia and Tewari are also very befitting their characters, as both actors had an unconventional route into the film industry:

“Naveen quit his cushy Engineering job to be an assistant to director Dibakar Banerjee on the films, LSD and Shanghai. I met Naveen while working with Dibakar and always felt he could act.”

“Mayank was a crime reporter who co-wrote the horror film, Ragini MMS. We met at a poetry slam and connected almost immediately,” Amit explains.

Also featuring in the film is Aditi Vasudev. Aditi played the lead in the National Award winning Do Dooni Chaar (2010) with Rishi Kapoor and Neetu Singh, and also played a significant part in Aamir Khan’s Talaash (2012).

An incredible young talent, Amit admits that the sought after actress was a perfect fit for the film: “I had never met her before but I wrote the script with her in mind.

“But it took time to convince her to do this film as she was committed to do another bigger film. But a week before we started the shoot, she walked out of that film and came on board,” Amit says.

The film notably has a strong youthful current running throughout, and Amit admits that while it was not his intention to make an art film, it was his keen desire to maintain a realistic and believable story as opposed to a conventional masala film:

“The film was written as a passion project with the same actors in mind. Once I finished the screenplay, we realised that the mainstream producers expected us to conform to the industry norms – cast known names, insert song and dance sequences.”

“We weren’t in a mood to listen to anyone and started shooting some scenes on our own. My managers, Datta Dave and Chaitanya Hegde then came on board to produce the film. Once we had the cut ready, we fished around for investors to help finish the film. That’s when Sailesh Dave (Movers & Shakers, The Great Indian Comedy Show) and his partners stepped in. 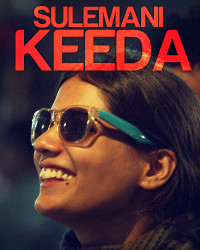 “So this film was ‘Indie’ out of compulsion. But this rawness has its own charm and it’s working for us!”

Amit adds that while masala films do retain immense popularity in India, film fanatics are also keen to see whatever independent cinema is available to them. For this reason Sulemani Keeda will be a popular choice for many.

Sulemani Keeda has already invited an incredible response from film lovers and has been screened at the 15th Mumbai Film Festival as well as the 12th Annual Indian Film Festival of Los Angeles.

The film will see its European premiere at the London Indian Film Festival on July 11 and 12. We at DESIblitz are proud to announce that we will be sponsoring the Q&A with Director Amit V Masurkar on both days.

You can find more details about both screenings and book your tickets on the London Indian Film Festival website.

Aisha an English literature graduate, is a keen editorial writer. She adores reading, theatre, and anything arts related. She is a creative soul and is always reinventing herself. Her motto is: “Life is too short, so eat dessert first!”
Salman Khan sings All songs for Kick
Apur Panchali has UK Premiere at LIFF