Sold gets Euro Premiere at LIFF 2014

Sold is a film that exposes the horror and absolute trauma that some young people face in South-East Asia. Produced by popular British actress Emma Thompson, the film will premiere at the London Indian Film Festival (LIFF).

"Because of Sold’s marvellous script and courageous and brilliant cast, it is a story that we can all watch."

Award-winning novel, Sold, by Patricia McCormick has been given its film debut. Published in 2006, it tells the true story of a girl from Nepal named Lakshmi, who is sold into sexual slavery in South Asia.

Academy Award Winning filmmaker Jeffrey Brown has recreated the book into a film adaptation, and going by the media hype surrounding it, it has been an eye-opener for many. Two-time Academy winner, Emma Thompson, is the Executive Producer of the film.

Sold is set to have its European premiere at the Opening Night of the London Indian Film Festival (LIFF).

DESIblitz are Official Media Partners of LIFF and are very proud to be associated with a film festival that showcases such sensitive topics to society. The film has already opened the 12th edition of the Indian Film Festival of Los Angeles (IFFLA). 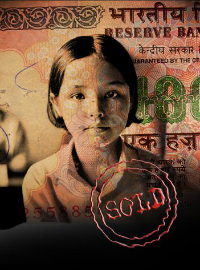 Director of LIFF, Cary Rajinder Sawhney says: “We are delighted that the festival is growing from strength to strength and that we have Sold for our opening night.

“It is a film which is remarkable on many fronts not least its riveting script and direction, but also gripping performances by Indian and US actors especially lead actor Niyar Saikia who brings so much power and heartfelt pathos to the role as the resilient young girl protagonist Lakshmi.”

The drama revolves around Lakshmi; a disturbing yet inspiring story of a young girl’s resilience in the face of cruelty. 13-year-old Lakshmi travels to India with the promise of a job to support her family in Nepal.

However, as seen widely in human trafficking cases worldwide, she discovers that the lure of work is just bait and she is pushed into a world of child prostitution. While she has to put up with Mumtaaz (played by Sushmita Mukherjee), spying fellow girls and irate customers, she will need to use her wits to escape this. Her story is all about hope and determination.

Globally, the average age of a trafficked girl is 13. India and Pakistan are the main destinations for children under 16 who are trafficked in South Asia. 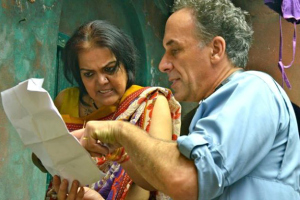 According to Global Voices, approximately 90 per cent of the 200,000 humans trafficked in India every year are victims of inter-state trafficking and are sold within the country.

There is another way of trafficking that has come up in the past decade where brides from poor families are re-sold, sometimes several times. They are used as maids during the day and for sex at night.

Pakistan is also a transit country for men, women and children subjected to labour and sex trafficking. Girls and boys as young as 4 or 5 are bought, sold, rented or kidnapped for domestic work, prostitution or begging.

To research this topic, author Patricia McCormick travelled to a shelter in Kathmandu and a village in the Himalayas. She found that native girls who believe ‘they are going to get jobs’ end up in brothels with no way to escape. 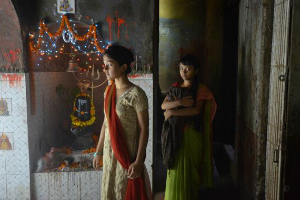 The author also spoke to girls and women in Calcutta’s red light district area and the horror experienced by two teenage girls became part of Lakshmi in her novel.

Debuting actress, Niyar Saikia is seen as Lakshmi in the movie. She was chosen after almost 1000 girls were auditioned in India and Nepal by Tess Joseph. She is incredibly talented despite being a newcomer and has already earned an acting scholarship form the Indian Government.

The film also stars Gillian Anderson, Seema Biswas, David Arquette, Parambrata Chatterjee, and Tillotama Shome to name few of the strong cast in the film. Gillian is best known for her role on The X Files and The Fall. Speaking about the film, she says:

“Working on this sensitively told film and with young women who have themselves experienced the unbelievable trauma of abduction and trafficking has opened my eyes to the horrors these young people face on a daily basis as well as the often life threatening danger those working at the charities put themselves in to free these innocent victims from modern day slavery.”

Emma Thompson is well known for being a fearless self-satirist: “Because of Sold’s marvellous script and courageous and brilliant cast, it is a story that we can all watch – so that we may understand the processes of slavery in modern India and feel able to act without feeling the kind of rage and hopelessness that gets in the way of doing anything,” Emma explains.

“It is wonderful to have our film premiered at London Indian Film Festival, to raise awareness of child-trafficking, which is an issue close to my heart and is shockingly on the increase world-wide.”

“We hope that this film will make people think and highlight the support for key charities such as The Helen Bamber Foundation and others working in this difficult area in India, Nepal and elsewhere,” she adds.

Sold will expose viewers to the unfamiliar world of child trafficking and they will get to experience the harsh and cruel world that many young children and teenagers face every day. A brutal yet honest drama, Sold will open the London Indian Film Festival on July 10.

After a short stunt on stage, Archana decided to spend some quality time with her family. Creativity accompanied with an aptitude to connect to others got her to write. Her self motto is: “Humour, humanity and love is what we all need.”
The IIFA Awards 2014 Round-Up
Shan Khan’s Honour a British Asian Thriller