Romesh Ranganathan was reportedly subjected to vile racist abuse by a woman during his comedy gig at London’s Hammersmith Apollo.

"I'm glad that's been dealt with."

It was reported that Romesh Ranganathan was racially abused by a woman during his comedy gig at London’s Hammersmith Apollo on January 6, 2022.

The comedian was forced to stop his show while security dealt with the woman.

Video footage showed the woman on her feet among the sitting crowd.

It had been the first show back for Romesh’s Cynics Mixtape Tour, which was rescheduled from 2019.

According to The Sun, the abuse began when Romesh made a joke about racism in football, saying:

This prompted a male audience member to start chanting: “Millwall!”

Romesh noticed the chanting and said to the man:

“Why are you letting everyone know you are a racist?

“I don’t actually know you are racist, I am sure you are a nice guy.”

The comedian’s comments then reportedly spurned the woman to start “yelling racist abuse” while “pointing” at Romesh.

The man had yelled the racist slur: “Hip-Hop coconut.”

Footage showed the woman being ejected out of the venue by security while the audience chanted “cheerio”.

Romesh handled the situation well and after the incident, he addressed the crowd:

“Do you know something? Let me tell you honestly, I’ve got really mixed feelings about that, as I was finding that very distracting.

“So I apologise for that and so I’m glad that’s been dealt with.”

Romesh then joked: “But also I’m slightly sad that’s the most excited you’ve sounded all evening!

“That’s the biggest response anything tonight has got – buzzing your t**s off that some women has got ejected.”

He also asked the crowd:

“Can I just ask, was I out of order there? It was really distracting.

“Ok cool, shall we just carry on? Let’s carry on.”

As the crowd cheers, Romesh adds:

“You’re making me feel like the little engine that could now.”

Earlier in the altercation, Romesh Ranganathan got distracted by the female heckler, telling her:

“Mate, listen, I’m getting distracted. You’re going to have to shut the f**k up. What’s going on?”

Security is then seen approaching the woman who forcefully gestures at them to move away.

Meanwhile, audience members are heard booing, with calls for her to “get out”.

Watch a Video of the Incident. Warning – Explicit Language 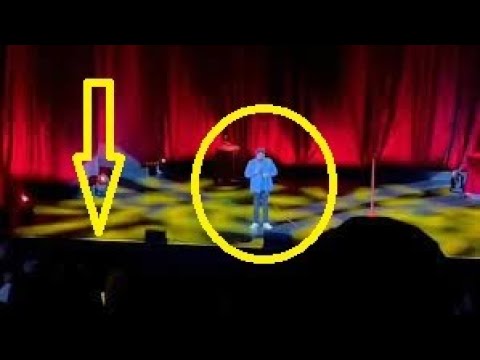 Dhiren is a journalism graduate with a passion for gaming, watching films and sports. He also enjoys cooking from time to time. His motto is to “Live life one day at a time.”
Jacqueline Fernandez asks for Privacy over Intimate Pictures
Urfi Javed Trolled for wearing Reversed Shirt