“It’s an incredible festival. I will be coming here to perform for as long as Phil Jerrod keeps his glorious beard.”

Romesh was among 11 other lucky and funny winners at the black tie event in Leicester, in celebration of comedians’ contribution to the entertainment industry and cultural scene.

The British Sri Lankan comedian participated in the 19-day comedy festival, during which a record high of 640 acts played at 47 venues throughout Leicestershire.

Romesh, a previous winner of Leicester Mercury Comedian of the Year, kept his humour while expressing his gratitude for the award.

He said: “I am absolutely delighted to win Best New Show at Dave’s Leicester Comedy Festival. It’s an incredible festival, and to have my show recognised is an amazing honour. I will be coming here to perform for as long as Phil Jerrod keeps his glorious beard.”

Thanks so much to @DavesLeicsFest for my best new show award. I'm so delighted and grateful. thank you!

Romesh is a familiar face for British television audience. Currently a regular on Channel 4’s Stand Up For The Week, he has also appeared in numerous shows for BBC and ITV, such as Live At The Apollo and Sunday Night At The Palladium.

He will be next seen in ITV’s Out Of This World – ‘a brand new entertaining, exciting science series which sets out to answer some of the biggest questions in the world’. 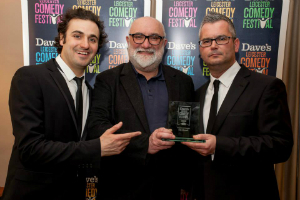 Romesh’s punchy humour can also be enjoyed on BBC Radio 4’s programmes, including Newsjack, News Quiz and The Now Show.

Having earned critical acclaim for his Edinburgh Festival show called Rom Wasn’t Built In A Day, Romesh’s win at Leicester will consolidate his status as a respectable entertainer and forerunner of British Asian comedians.

Another key moment of the event, hosted by comedian Patrick Monahan, was the late Rik Mayall’s win for Legend of Comedy, voted by readers of the Leicester Mercury.

His friend and comedian Alexei Sayle accepted the prize on behalf of Rik, who passed away in June 2014.

Alexei said: “It was a terrible shock for all of his friends when Rik died last year. But it’s thanks to things like this that keep his memory alive, so thank you.”

Chaired by Martyn Allison, Dave’s Leicester Comedy Festival has been running since 1994 and has achieved growing success year on year. 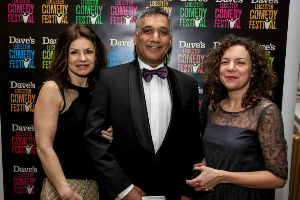 The inaugural festival in 1994 attracted a modest 5,000 audience at 40 events in 23 venues over 7 days. In 2015, the number of shows has increased tenfold during its three-week run.

Though the award ceremony only began in 2006, it has already established itself as a great honour in the industry.

Festival director Geoff Rowe said: “Our annual awards ceremony has become an important part of the festival as we say a huge thank you to everyone who has been involved.

“The festival has become a place where new talent can get spotted, as well as an opportunity for us to recognise great British comedy performers.”

Here is the full list of winners at Dave’s Leicester Comedy Festival 2015:

DESIblitz congratulates all the winners and looks forward to another year of brilliant British comedy!