Ranveer Singh sat ringside at the Etihad Arena in Abu Dhabi enjoying his first MMA event as the UFC put on another thrilling show.

"I cannot express to you how excited I am"

The Indian personality sat ringside and was amongst some elite celebrities in the packed-out Etihad Arena.

Ranveer even got into a playful fistfight with social media sensation, Hasbulla, who jokingly gave him a whack across the jaw.

This was the first time Ranveer has attended a UFC event and it did not disappoint his expectations.

The official UFC Instagram account posted Ranveer Singh speaking about his feelings before the main fights kicked off. He expressed:

“This card is one for the ages.”

“We are going to see the most elite fighters in the world going toe to toe at the highest level.

“This is the first fight of my entire life, I cannot express to you how excited I am. I am sat here ringside and you can actually hear the blows.”

UFC 280 was an incredible spectacle that saw two of the biggest fighters headline the show.

Charles Oliveira and Islam Makhachev were both on impressive win streaks heading into the bout so most fans expected the brawl to be close.

However, it was Makhachev who came out on top in what turned out to be a dominant performance.

One of his coaches is the former lightweight champion Khabib Nurmagomedov, who many think of as the greatest MMA fighter of all time.

So, it came as no surprise he was in the corner shouting instructions and celebrating as Makhachev submitted Oliveira in the second round. 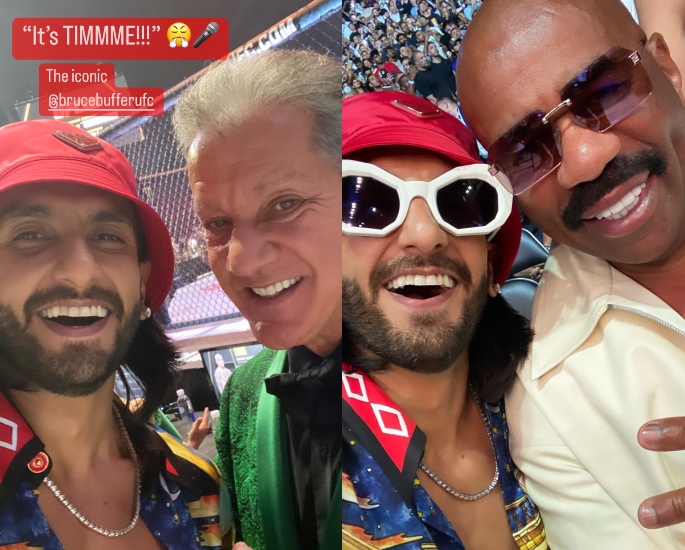 Ranveer Singh was seen in hysterics at the punches, kicks, and wrestling that got fans up and out of their seats.

He posted on his Instagram account throughout the night and captured moments with legendary ring announcer Bruce Buffer and American actor/presenter Steve Harvey.

MMA is one of the most decorated sports in the world and has been growing in popularity over the years. However, it’s not as famous in South Asia.

Whilst South Asian mixed martial artists are apparent, they are rarely seen in major corporations.

But, with more celebrities promoting MMA on their social feeds, it may see a surge of attraction from South Asian countries.