"The look and feel of the film is close to Hollywood. We have stayed true to the superhero genre."

On 19th June 2017, the trailer for Project Ghazi released, aiming to mark a new genre in the Pakistani film industry.

Set for a release date of 14th July 2017, the film hopes to make an impact not just in Pakistan, but all over South Asia.

In this first glimpse of the anticipated film, it reveals action-packed scenes and intriguing characters. Humayun Saeed and Sheheryar Munawar star in the lead roles, as well as Syra Shahroz who features as a scientist.

Reports suggest that Munawar and Shahroz’s characters will develop a romantic relationship. In addition, viewers get sneak peeks of Adnan Jaffar as the film’s masked antagonist.

Project Ghazi explores the reality of human nature, which Jaffar’s character reveals as lies created since the dawn of time. With its thrilling science-fiction setting, viewers can expect the film to take on a Hollywood approach, rather than Bollywood.

In recent years, Hollywood has witnessed a massive interest for superhero films, particularly after the success of the Marvel Cinematic Universe. As the industry delves more into comic books and science-fiction for inspiration, it seems Pakistan is following suit.

In an interview, producer Ali Raza spoke more on this Hollywood influence. He explained:

“The look and feel of the film is close to Hollywood. We have stayed true to the superhero genre and have made a deliberate effort to stay away from Bollywood’s shooting style.” 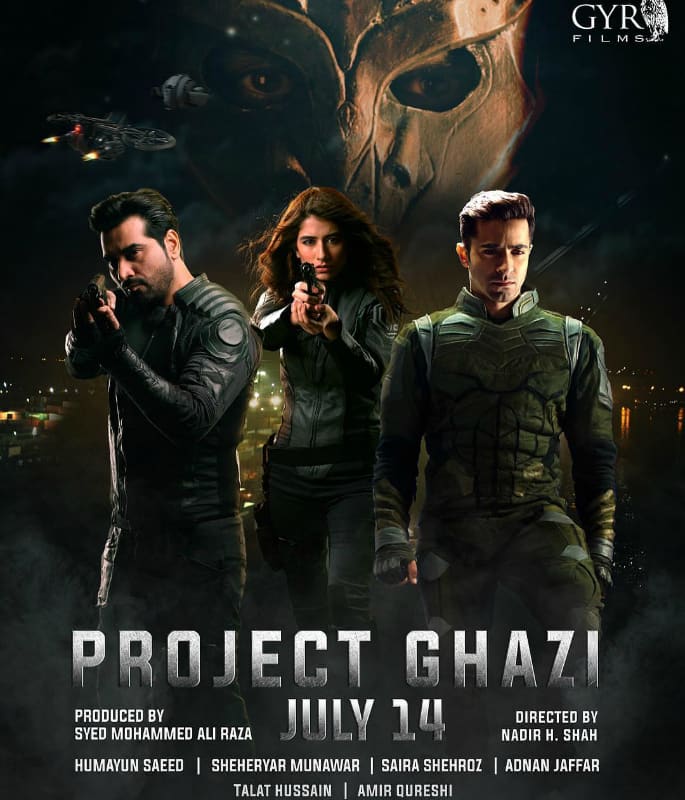 Director Nadir Shah also revealed on why they made Pakistan’s first superhero movie in the first place, saying: “The main thing for us is that we’re doing something innovative. And it’s the first step. We can go further than this as well.”

But, in an intriguing twist, Nadir Shah revealed that they didn’t want to stretch the suspension of disbelief too much:

“Basically the team put in a lot of effort into the script as well as the visual effects. The film has a semi realistic tone which means that the superheroes won’t be flying around.”

Project Ghazi does contain the typical elements of a superhero flick. These include the battle between good versus evil, masked characters and high-energy action. But the real question remains on whether it will create a new genre in Pakistani films?

Reports remain mixed so far. Some appeared impressed and thrilled with the film’s first look. But others argue on whether it is simply an action movie rather than a superhero flick.

However, it still remains exciting that the industry has branched out to new genres.

And with an upcoming release of 14th July 2017, perhaps we can expect to see more of what’s in store for this innovative film.