Pakistani Couple getting Intimate in Car on Motorway Charged

A Pakistani couple has been charged after they were caught getting intimate with each other in a car while on the motorway.

"Whatever they were seen doing is a crime"

A Pakistani couple got caught getting intimate in a car while on the Lahore-Islamabad motorway. They have now been charged with public indecency.

The matter came to light after a video went viral. Filmed from another moving car, the couple can be seen in the backseat of the vehicle.

After the video went viral, the National Highways and Motorway Police (NHMP) carried out an investigation.

They went on to explain that scientific methods were used to confirm where the incident took place and the details of those involved.

A video clip was shared by a Twitter user who wrote:

“These people are shameless, Government authorities should do something about this, it’s totally unacceptable.”

A source for NHMP said:

“Whatever they were seen doing is a crime under our penal code…It is public indecency.”

An FIR was registered against the Pakistani couple at Kot Momin Police Station in Sargodha. The document stated:

“An indecent video on social media has been obtained on October 27, 2019, in which a couple is doing indecent acts.

“The unidentified couple in the vehicle have committed indecent actions. Hence, it is requested that legal action against people riding in the vehicle be taken.”

The video, which has since been deleted, sparked an online debate. While some slammed the couple for their behaviour, others said that the video was a violation of their privacy. 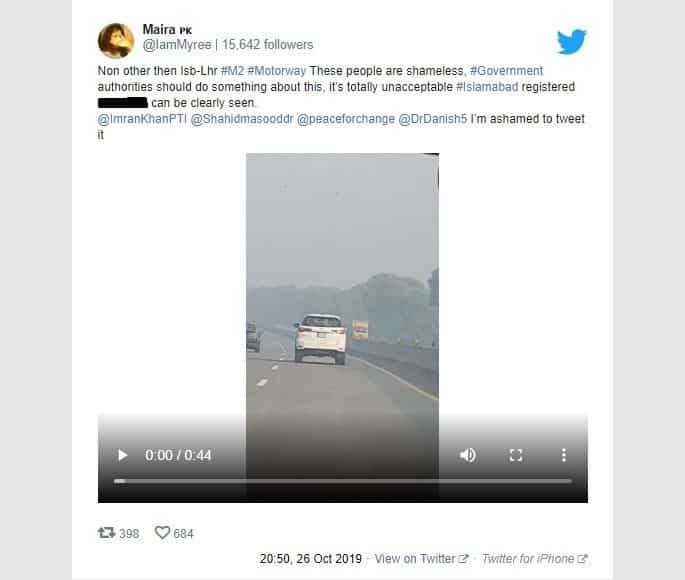 One user commented: “Not defending both these acts but ‘privacy of your own car’ doesn’t exist if it’s on a public road.

“A dashcam or road surveillance cameras are recording too. The perpetrators should’ve known that.”

But one person argued:

“Only in Pakistan you can film someone in the privacy of their own car without their consent, post it online and then cry about indecent behaviour.”

She went on to say that people should “stop taking the law into their hands.”

“I’m not defending PDA [public display of affection] or public fornication so please don’t @ me with your sermons.

“Recording someone without their consent is unethical and this lady went as far as to post their private information online in order to defame them. Stop taking the law into your hands.”

“It is wrong for a citizen to try to take the law into his own hands and engage in moral policing as we can see here.

“If the person who made the video truly wanted to do their part then they would have gone to the police to lodge a public indecency case.”

“To make it clear this is an infringement under the Prevention of Electronic Crimes Act, 2016.

“It is wrong for their privacy to have been compromised in this manner.”

Dhiren is a journalism graduate with a passion for gaming, watching films and sports. He also enjoys cooking from time to time. His motto is to “Live life one day at a time.”
Indian Man killed Son-in-Law with Spear for Marrying Daughter
Man guilty of Murder of Father of Four in Chinese Takeaway