A 19-year-old bus hostess has been allegedly shot and killed in Pakistan by a security guard who had his marriage offers rejected by her.

CCTV security footage emerged of the pair having an altercation

A bus hostess, Mahwish Arshad, who worked in Faisalabad, Pakistan, was shot by Umer Daraz, a security guard after she allegedly refused his advances to marry him.

Arshad who worked at Al-Hilal travels was shot on June 9, 2018, by Daraz, who worked with her at her previous company Kohistan travels.

CCTV security footage emerged of the pair having an altercation on some stairs, as she was heading back to her living quarters, and then a shot being fired at her direction resulting in Arshad falling onto the stairs injured by the bullet, from which she later died.

An initial investigation by the police for which a report was registered in Mahwish’s father’s name stated that Daraz when working with her was pressuring her to marry him repeatedly. But 19-year-old Mahwish Arshad was not interested and refused.

A video on social media did its rounds showing the couple exchanging heated words prior to the murder of Arshad. It showed Daraz grabbing her wrists and trying to force her on a bus ride on the same day of the shooting.

“You’ll see what I would do when you get to the [bus] terminal.”

This resulted in him allegedly accosting her that night as she was on her way back to her residence at a deserted bus terminal and then subsequently, shooting and killing her, as seen in the CCTV footage.

The FIR states that the person who shot her fled the scene of the crime and Arshad, who was taken to a local hospital, lost her life whilst receiving emergency treatment.

Umer Daraz was then arrested by police after the murder on the same night and there are claims that he has confessed to murdering Mahwish Arshad. 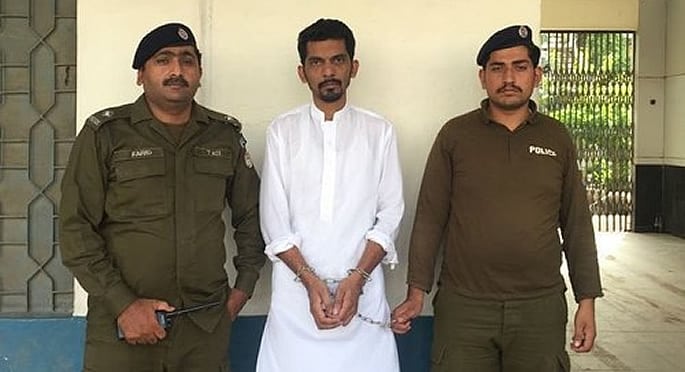 He was presented in court on Monday, June 19, 2018, in front of a district magistrate in Faisalabad. He has subsequently been remanded in custody.

With the video of the shooting getting shared on social media, the caretaker Chief Minister of Punjab in Pakistan, Dr Hassan Askari, has been appalled by the murder of this young woman and ordered an immediate investigation into the crime.

Dr Askari requested that the provincial police head from the region to provide an investigation report at the earliest for his attention.