After a spectacular eighth edition, the London Indian Film Festival 2017 (LIFF) ended on a high on 29th June.

It was a very fitting close to what has been an incredible festival. For 2017, LIFF has successfully welcomed a truly diverse array of films from the Indian subcontinent.

We have been mesmerised by stunning cinematography, astounded by brilliant cast performances, and moved to tears by emotional and thought-provoking story lines.

Special guests included the likes of the cast and teams behind Hotel Salvation and Babylon Sisters. Speaking to DESIblitz, director Shubhashish Bhutiani revealed that the response had been so positive for Hotel Salvation that there are plans now to distribute the film in the UK and several other countries: 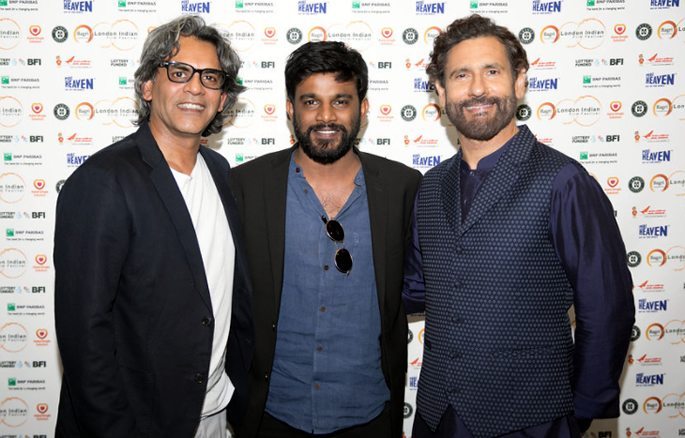 “I couldn’t have imagined this kind of response from the audience in the UK. It is a really important area because it’s a very international community that comes to see the film, and people have connected and responded from all ages and backgrounds.

“This gives us an optimistic sense of how the film fares when it comes to theatres. Hotel Salvation is going to be released in theatres in 25 countries worldwide, including [the] United Kingdom, from end of August,” said director Shubhashish Bhutiani.

“LIFF has given a home for films that would not get a chance to build a word mouth to go wider.”

Hotel Salvation producer, Sanjay Bhutiani added: “The warmth we got from the people and the involvement we could see with the film to LIFF made it a very good festival.” 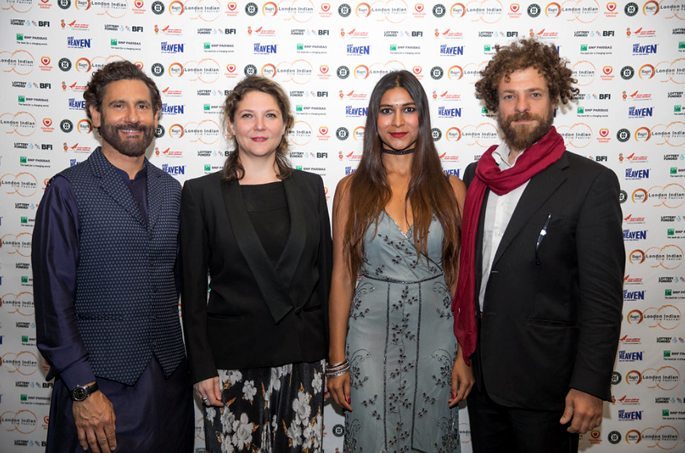 Babylon Sisters team explained how LIFF has made the British Asian audience more aware of the Indian community residing in Italy and how the migrant story can relate to all.

Actress Nav Ghotra said films like Babylon Sisters were “not only for Indians but Italians, Croatians, Chinese”. She adds that the film “transcends to all nationalities which warms our heart and crosses borders”.

The cast also revealed how they had a chance to catch several films throughout the festival, such as Pakistani gangster romance, Gardaab (Whirlpool), had the chance to see Gulshan Grover, and were excited to see the closing night film, Sexy Durga:

“The name is really attractive and you want to know what it is,” laughs Nav. 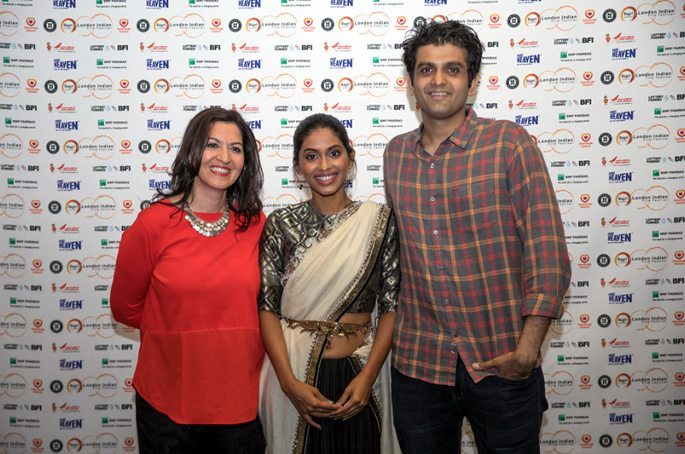 In honour of the fantastic films showcased at the festival, the Closing Night also revealed the winners of the LIFF 2017 Special Awards.

It is no surprise that the Audience Choice Award went to the brilliant A Billion Colour Story, which is directed by N Padmakumar and produced by Satish Kaushik. The acclaimed film explores Hindu-Muslim unity and religious harmony across all borders.

Padmakumar and Kaushik were delighted by the recognition, saying: “We’re thrilled and truly, absolutely honoured, to receive this award. It’s incredibly special for us that A Billion Colour Story resonates with audiences across countries and continents. It continues to vindicate our faith that people and their hearts are the same across cultures and horizons.”

The Satyajit Ray short film winner was Siddharth Chauhan’s Papa, which was screened to audiences on the Closing Night. Papa is a quirky story about a working man looking after his disabled mother and a pigeon – who the mother has treasured in memory of her deceased husband. 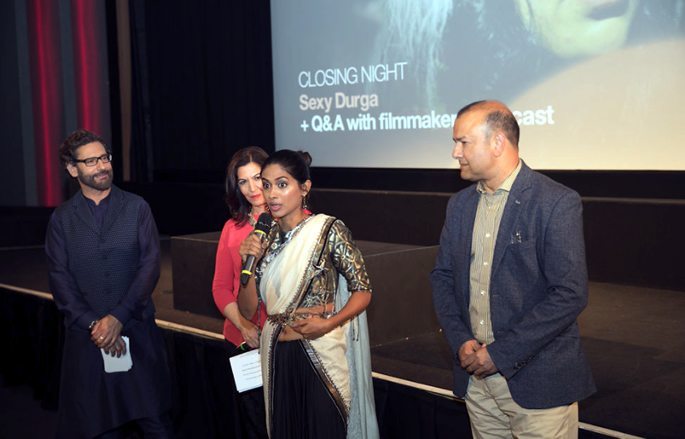 Speaking about the short film, Siddharth says: “I was fighting depression and trying to win over myself in many ways when I decided to take the challenge of making this film.

“I didn’t have a single penny and no professional assistance, but with a deep prayer in my heart and with the support of my friends in Shimla, we begged, borrowed and did everything we could, to make this film in the best possible way. It wasn’t easy for us, but I guess all the effort was worth it. It is an honour to win this prestigious award.”

Actress Anjali Patil won the Sunmark Achievement Award. She told DESIblitz: “A number of feelings getting the award, coming here and receiving this award was a big honour.

“I am deeply touched with LIFF and the Bagri Foundation. So many of my films have been screened as part of LIFF, so be here actually and receive the award with the little work I have done is just amazing.”

Her association with LIFF began from her first film, Delhi in a Day, which was showcased at the festival in 2011, to this year, which screened Newton. She revealed that her upcoming projects included those with Rajinikanth and with Rakeysh Omprakash Mehra, so there is definitely more to come from this award winner! 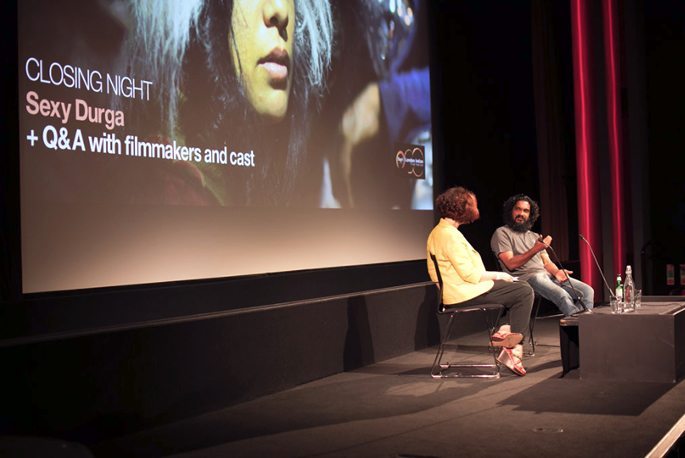 Of course, the London Indian Film Festival 2017 Closing Night would not be complete without the final film of the festival, an intriguing dark thriller, Sexy Durga.

Directed by Sanal Kumar Sasidharan, the film begins on a lonely highway in Kerala at night. A couple, Durga and Kabeer, hitch a ride to the railway station. However, they soon realise that it is difficult to escape the car that they have taken a lift with – a car filled with small time gangsters transporting arms and their sinful thoughts.

Whilst their journey takes a sharp turn into endless fear, the audience also sees a dual narrative of masses coming together to celebrate the Durga festival. Durga may be being respected and celebrated as a Goddess, but what about the millions of Durga’s living in the world today?

In the Q&A after the screening, director Sanal Kumar Sasidharan explained how he used the dual narrative to show how people are ignorant to the abuse that’s going on in society or even in front of them.

Sexy Durga was shot unscripted to make the performances rawer. By choosing Kerala for the location of the film implied that incidents of gang rape do not just happen in cities like Delhi, but this mindset is plagued throughout the country. 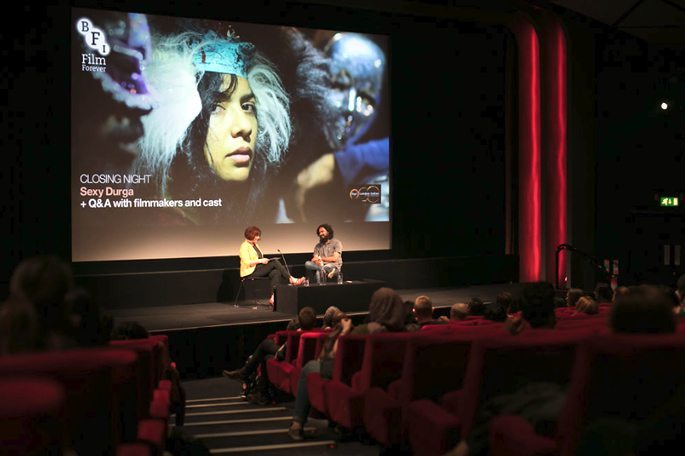 The film has, unfortunately, been put under a controversial spotlight, including bans as a result of the title. But Sasidharan is adamant that he does not want to change the title as it sparks curiosity and directly relates to the concept of the film.

Cary, director of the London Indian Film Festival 2017, told DESIblitz about his choice of Sexy Durga as the Closing Night film, saying: “There are sharp twists and you don’t anticipate what will happen next. It was fresh from the success of winning the prestigious Best Film award at the Rotterdam International Film Festival making it a brilliant choice for a Closing Night film.”

The London Indian Film Festival 2017 has gone from strength to strength and continues to create a bridge between South Asian and British independent filmmaking. Cary describes this as putting the spotlight on the South Asian community, encouraging new stories and diversity in the films screened:

“The nicest thing is that people are really getting the films. We have been working on this for a year so it’s a wonderful achievement when the audience gets what we’re working on. We’re not showing the easy stuff – some are heartbreaking, some are challenging and some are beautiful.”

“That diversity is in the Asian community and lots of non-Asians have come to the festival to share each other’s cultures and that’s the really exciting thing about being in this city, dedicated to diversity,” Cary adds.

Through having the festival in both London and Birmingham, Cary and his team are able to reach an even wider audience. Cary is determined to ensure that next year’s films will be even better and the festival will continue to grow in a positive direction, as it has done so over the last eight years.

Watch this space for an even more unforgettable ninth anniversary of the London Indian Film Festival!

Sonika is a full-time medical student, Bollywood enthusiast and lover of life. Her passions are dancing, travelling, radio presenting, writing, fashion and socialising! “Life isn’t measured by the number of breaths taken but by moments that take our breath away.”
Channel 4’s Ackley Bridge to have Second Series
Will Suhana and Aryan be making a Bollywood Debut?