DESIblitz reviews the social drama ‘A Billion Colour Story’, which has been screened as part of the Birmingham and London Indian Film Festival 2017.

Screened as part of London Indian Film Festival (LIFF) 2017, A Billion Colour Story promises to be a dynamic take on cultural differences in contemporary India.

“A Billion Colour Story is a rare gem and this kind of cinema comes to you rarely so you can’t let go of such an opportunity.”

The film revolves around Hari Aziz (Dhruva Padmakumar), the coolest 11-year-old ever.

He lives in Mumbai and is a member of the young internet generation whose outlook is global, curious and sensitive to the nuances of cultural difference.

Hari’s father Imran Aziz (Gaurav Sharma) is Muslim by birth but untethered by religion, as is his Hindu mother Parvati (Vasuki Sunkavalli).

They are inspirational parents who are struggling to make their first feature film.

Imran is firmly focused on the belief that India is an incredible country that will always overcome its differences.

But as the parents face financial difficulty with their film, the family has to downsize to rented apartments and soon come face-to-face with ongoing religious prejudices and corruption. 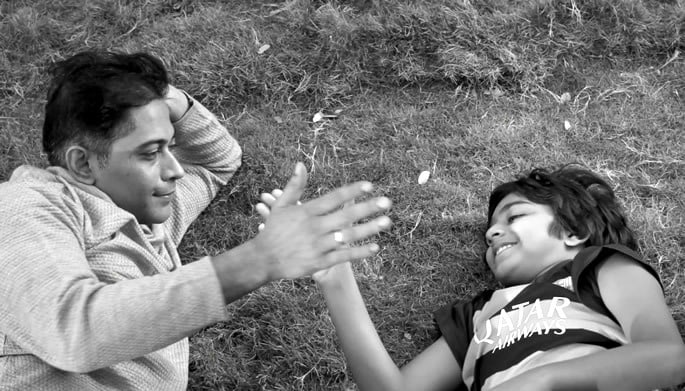 As his parents discuss whether to stay or leave the country they love, Hari makes his own plan to save the day.

The plot and concept seem to be quite interesting. But the beauty of A Billion Colour Story is that it touches on so many subjects including homosexuality, domestic violence and corrupt law. Therefore, this film becomes one which outlines the current situation of India.

In the film, one of the protagonists claims that “India has lost its poetry”.

By undertaking so many key issues prevalent in society the film is both satirical and thought-provoking.

The use of black and white filter can be interpreted in various ways. It suggests society views religion as black and white, i.e. Hindu or Muslim. Thus, by Hari saying: “We celebrate Christmas. So that makes us Christians too,” highlights that there are more cultures, which should also be acknowledged and appreciated.

After a sudden turn of events, the coloured filter fades in, steadily omitting the black and white. The contrast of both filters is symbolic of Imran’s ideology with the realistic situation of India. The transition of colours further suggests that India can also change, if we tackle the current issues and find a solution to live in unity and harmony.

This concept and idea is quite refreshing and novel for Indian cinema.

As well as the film’s narrative, the camera angles are used well. For example, a conversation takes place between mother and son Parvati and Hari, where the son describes his concerns about father Imran.

The camera exhibits a close-up and focus-pull shot of both Parvati and Hari as they share their perspectives, this clearly reflects the themes of innocence vs experience. 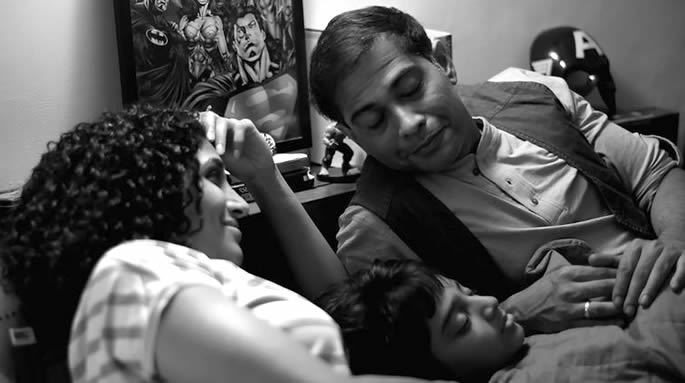 Furthermore, the fact that the camera focuses on their emotions also conveys the close proximity between both characters. It has been wonderfully directed by N Padmakumar.

Whilst a film like A Billion Colour Story does not star mainstream Bollywood actors, the leading artists, Gaurav, Vasuki and Dhruva deliver convincing and natural performances.

All of these performances engage with the audience. After the credits roll, it feels as though we have travelled with the Aziz family throughout their journey.

Gaurav Sharma essays the role of Imran Aziz. A dedicated father, husband and filmmaker. Whether it’s the emotional or angry quotients, Sharma enacts his role with such ease and his belief in the film is one which many can resonate with.

Playing the 11-year-old boy Hari, Dhruva Padmakumar is the show-stealer. From loveable moments with his “girlfriend” Sophia to explaining the deeper meaning of India’s tricolour flag, Hari is a well-developed character.

When Hari delivers dialogues such as “my parents are not Hindu nor Muslim, they are India-lovers,” one cannot help but admire the child’s maturity and innocence.

Vasuki Sunkavalli moulds naturally as Parvati. Whether it’s the heartwarming moments with Hari or during the emotional quotients, Vasuki shines.

Unlike many other films that have been made recently, there are hardly any flaws with A Billion Colour Story. It certainly is a film which has been made from the heart and has a soul that connects with the audience.

Overall, A Billion Colour Story is filmmaking at its utmost best. Following well-developed characters, a thought-provoking plot and outstanding performances, the movie is certainly one in a billion!

Undoubtedly, one of the best films featured at London Indian Film Festival 2017!

Anuj is a journalism graduate. His passion is in Film, Television, dancing, acting and presenting. His ambition is to become a movie critic and host his own talk show. His motto is: "Believe you can and you're halfway there."
Dangal passes Rs 2,000 Crore and makes World Cinema History
10 Young & Fit Heroes ruling Bollywood