"In Marathi cinema, it’s very rare that someone makes a horror film"

Horror is one genre which remains undeveloped in the Indian film industry. But Lapachhapi (Hide & Seek) is one scary feature which could prove to be a trendsetter.

Directed by Vishal Furia, Lapachhapi does not adhere to the formulaic components of a usual horror film – i.e. sex and songs. Lapachhapi spooks us through its narrative as well as the social issues raised in the film.

“Lapachhapi is a Marathi film, so if you see in Marathi cinema, there are no any such horror films people made and it’s very rare that someone makes a horror film.

“I think our director Vishal Furia has taken the step ahead. This film got nominated at so many film festivals and today in London.”

In the film, Pooja plays Neha – a woman who is eight months pregnant. She, along with her husband, Tushar (Vikram Gaikwand), are escaping from gangsters in the big city.

They seek shelter at their driver’s house which is situated in rural India. But the eerie house is hidden deep within sugarcane fields and surrounded with secrets of a disturbing past that begin to re-emerge. 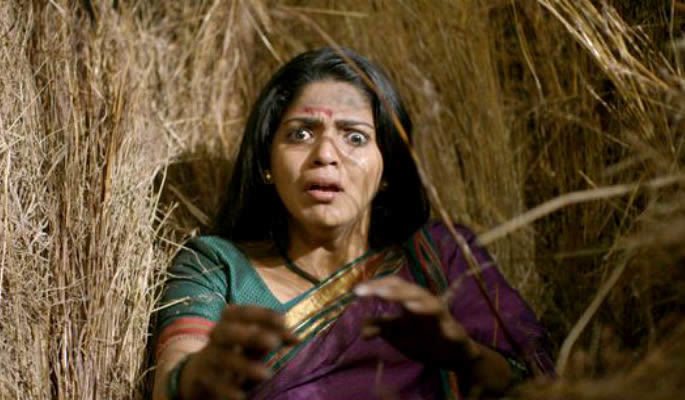 Neha soon realises she is in a deadly trap, and there is only one way out.

From the very first shot, when the couple enters the village, the viewer is unsettled. The close-up camera shots of Neha and Tushar walking through the fields foreshadows the mystery that will entail. The camera work allows the audience to follow the protagonist’s journey.

Not just this, but foreboding dialogues like “a slight distraction and things burn to ashes”, alert the audience that terror is lurking and will soon unfold onscreen. But don’t be tricked. Brace yourself for a ride of twists and turns.

The objects used in the film are also haunting. One, in particular, is a radio, in which a cassette plays a particular song. This is repeated so many times in the film that one cannot help but sing it after the credits roll or refrain themselves from saying: “Aale Aale Aale’ (Here I come).”

Undoubtedly, the performances are full-throttle. Pooja Sawant is first-rate. Playing the role of a pregnant woman is not one which many modern actresses would dare to play.

Sawant does not go overboard with her terrified expressions. Unlike many of the scream queens in Bollywood, Pooja shows that featuring in a scary film is not just about the widened eyes – but also revolves around understanding the character and their circumstances. Definitely, a performance which will gain her a lot of recognition!

Vikram Gaikwand does well as Tushar. He supports Pooja Sawant in playing the husband. Watch out for him in this film.

Who really makes your blood crawl in this chilling film is Usha Naik as Tulsi, the village lady. Her sweetness is so hard to digest, you know that there is something amiss.

In Indian cinema, there has been no actress who has been so menacing in a negative role as Naik has been in Lapachhapi. Knowing that what her character does in the film, actually happens in real life, is indeed terrifying.

Any glitches? Not particularly, but the subject tackled is not for the faint-hearted. In fact, there are a few graphic scenes which are quite shocking to digest. You have been warned!

Overall, Lapachhapi is one of the finest horror films in Indian cinema. As the film tackles a subject which is socially relevant, it becomes a movie which that educates and entertains at the same time.

However, after seeing this, one thing is for certain – you’ll never want to play Hide and Seek again!

Anuj is a journalism graduate. His passion is in Film, Television, dancing, acting and presenting. His ambition is to become a movie critic and host his own talk show. His motto is: "Believe you can and you're halfway there."
10 Young & Fit Heroes ruling Bollywood
LIFF 2017 Review ~ GARDAAB (WHIRLPOOL)