Apps used by Cheaters to hide their Secret Affairs

Developers have created apps for almost anything, including helping cheaters to have secret affairs! We check out 7 of these unusual mobile apps.

While this app seems flawless, be wary if your partner feels suspicious of your sudden 'interest' in stocks!

A decade ago, cheaters would face a hard time trying to hide their secret affairs.

While they used emails or texts to send racy images or conversations, their partners could easily discover them through snooping on their browser history.

However, through the rise of mobile apps, developers have designed applications which can aid cheaters in their activities.

And as people grow to become more tech-savvy, those who pursue secret affairs are finding new ways to cover their tracks.

These mobile apps, designed in a way to (sometimes unknowingly) aid cheaters, help them in hiding any suspicious messages or photos.

Let’s take a look at 7 of these apps used for secret affairs. 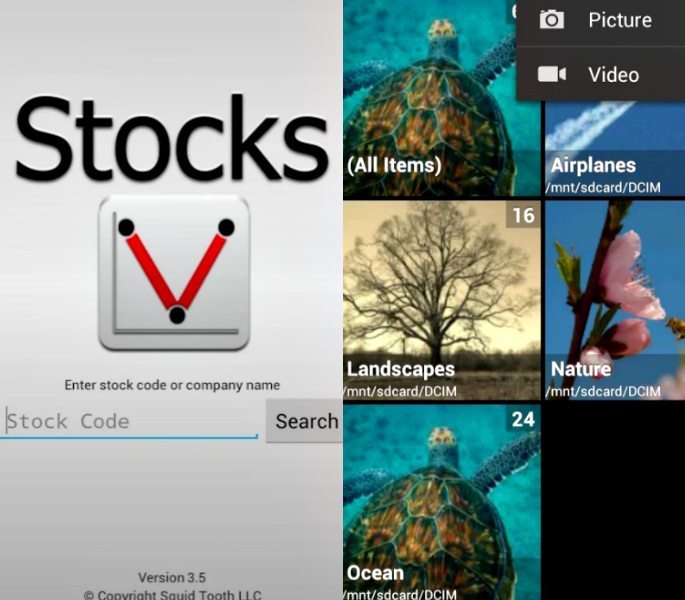 This app works brilliantly to help you hide any images or videos from your partner. Vaulty Stocks, on the surface, appears as a mundane stock app on your phone.

However, it actually acts as a vault that protects all your private images and videos by hiding them and keeping them safe. With its crafty disguise and password protection, this should serve as plenty to hinder partners from accessing it.

Vaulty Stocks also contain other nifty features, ideal for covering tracks. For example, if someone tries to access the app and enters a wrong password, it takes a snapshot. Called a ‘mugshot’, this gives you a clear idea of who is becoming suspicious of you.

The app also offers multiple vaults and an online backup. While this app seems flawless, be wary if your partner feels suspicious of your sudden ‘interest’ in stocks! 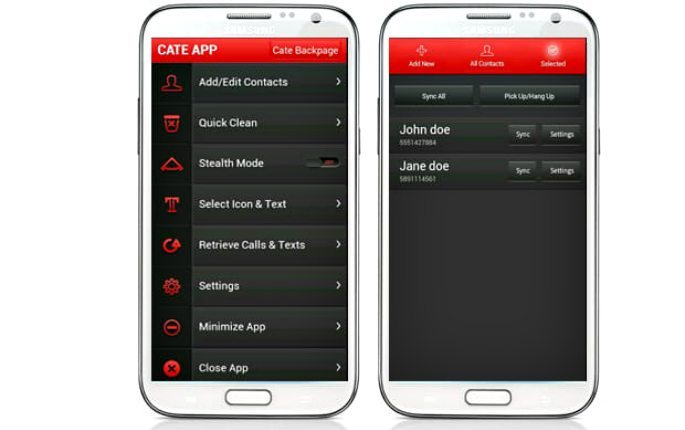 This mobile app believes: “Love is blind, we keep it that way.” That’s exactly what it aims to do, by keeping all your calls and messages stored in one, secretive log for each contact.

Call and Text Eraser (CATE) works effectively in that logs can become easily deleted, with just the click of a button. Or for quick-thinking minds, just simply shake the phone to delete racy messages.

This mobile app also contains a Stealth Mode, which allows it to operate in the background. It will show no icon in your phone’s taskbar and won’t appear in any task killers. Meaning it will continue to run, hidden from any suspicious partners.

With its own separate contact list, secret pin and quick clean, CATE hails as one of the best apps for secret affairs. 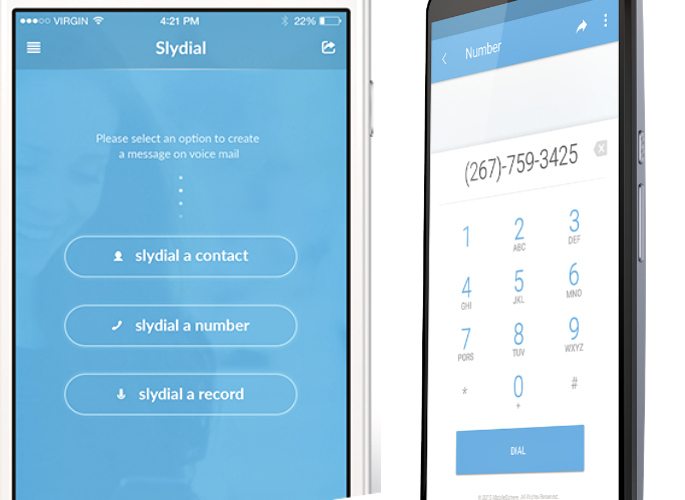 With any secret affair, cheaters involved know how phone calls can become very suspicious. However, Slydial allows this risk to vanish and even protects the identity of your caller.

The app works by the user calling directly to someone’s voicemail, meaning you can leave a voice message. Not only does this avoid the phone ringing, but it means the phone will not show Caller ID, meaning your mistress or mister remains hidden.

While Slydial doesn’t explicitly mention its great use for cheaters, it does provide a good way to cover your tracks. And to arrange meet-ups, without the use of text messages.

Just make sure you remember to clear your voicemail! 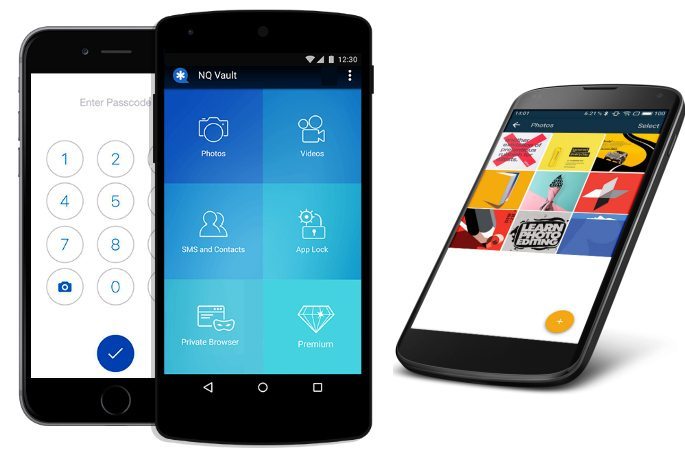 NQ Mobile Vault perhaps hails as one of the most clever mobile apps for cheaters. It can hide pretty much everything; whether it be texts, images, videos, call logs and even contacts.

As it hides them away in a protected vault, it also encrypts the data. Meaning only you can access it.

While this seems tempting enough, it also contains a Stealth Mode. When activated, the program becomes hidden on the phone, away from any snooping partners.

NQ Mobile Vault also requires a password for you to enter it. And if this password is entered wrong, not only will it take a photo, it will also record the attempt. Compiled in a list of ‘Break-in Attempts’, cheaters can keep track on who has become suspicious of them. 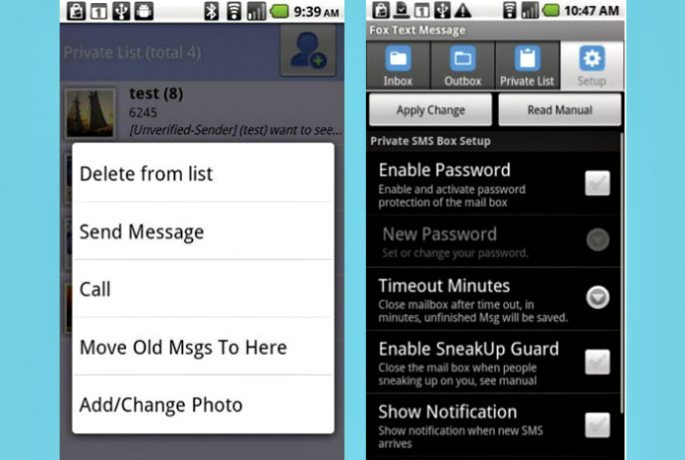 One simple method is to just simply shake your device. The app will then immediately delete all your private messages. It can also erase evidence by the user remotely sending a text message to their device, which will contain a pass code.

The mobile app also remains hidden on the phone, away from prying eyes. In addition, it contains an impressive feature once you add someone as a private contact. All their messages will go directly into the app rather than your inbox. You can even transfer old messages onto it. 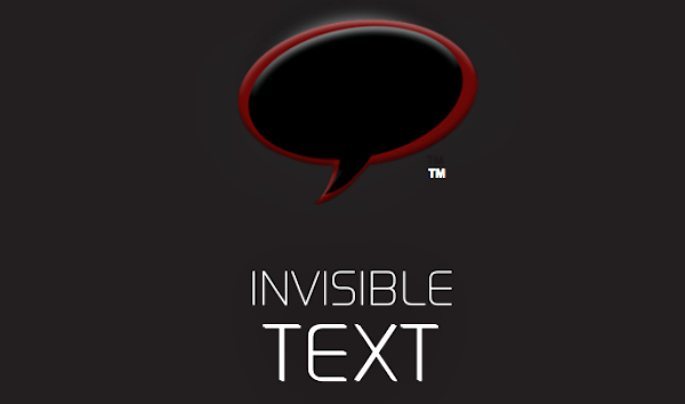 Invisible Text ensures that all conversations created in its app will become completely private. It will cover your tracks, not just from your partner, but also from your mistress or mister.

In each conversation, only you and the person you communicate with can see the messages in this app. Once the conversation is finished, it will disappear for good.

The app also doesn’t allow screenshots. Instead, it sets an app lock for 60 seconds when it detects someone has attempted to take a screenshot. This means that no evidence can be taken from snooping partners or mistresses/misters.

Lastly, it also offers an option to delete sent messages, providing they haven’t been opened by the recipient. 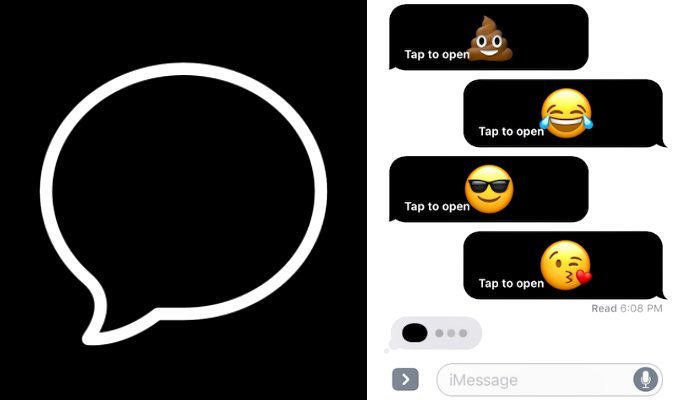 Black SMS keeps messages completely hidden on your phone. With password protection and self-destruction, this app will make sure your secret affair stays hidden!

Available on iOS, it uses the iPhone’s Touch ID for access to private messages. Personalised, this will prevent suspicious partners from trying to uncover any evidence.

In addition, the app also provides the option of disguising your messages. With replacement emojis and GIFs, you can cover up any racy content and make it appear completely innocent on the surface.

As technology and mobile apps evolve, so will the whole nature of cheating. These apps allow new ways of keeping your secret affair hidden from any snooping partners.

And by eliminating the risk of evidence becoming discovered, no wonder they have become so popular.

But while cheaters become up-to-date with these kinds of apps, so too will their partners. Meaning they will soon try to unearth these secretive apps.