The Kumars make their Comeback

The well-loved British Asian television chat show, The Kumars, has made a comeback. DESIblitz takes a look at the new series of the iconic television show.

"Certainly for me there were nerves, because it's been seven years."

After a long 7-year break, The Kumars are finally back on our screens welcoming new celebrities every week. The Kumars at No. 42 has now simply been named The Kumars, moving from the BBC and will now be aired on Sky.

In this new series, the Kumar family have been hit by the recession and have had to relocate from Wembley to Hounslow, where they are now living in flat 42B behind Ashwin’s (Vincent Ebrahim) hardware shop.

Sanjeev’s mother has returned to India to care for relatives, however Ummi is still around, as open as ever. A new addition to the crew is the family’s interfering landlady, Hawney (Harvey Virdi) who is an aspiring actress and hand model. 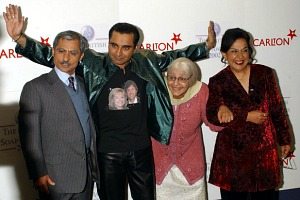 Of course there were nerves for the cast as they were reviving a very popular series, and the pressure to comeback with an even better show was high.

Sanjeev said: “Certainly for me there were nerves, because it’s been seven years since [the last series] and we’ve moved the storylines along, so it wasn’t just going back to the same house and the same set.

“It feels like wearing old comfortable slippers but on a completely new floor. The sensation is slightly different to what it was, but it’s been fun trying to get comfortable,” he added.

Sanjeev’s character (played by Sanjeev Bhaskar) is still trying to be a ‘superstar, legend and chat show host’, who tries to interview celebrities but constantly gets distracted by his nosy family’s interruptions.

Meera said: “You don’t really want to come back without offering something different, but without changing what people loved about the show, which was the improvisation element and the family. It takes a while to get all those things right, but I think we have now.”

Syal and Bhaskar were the main leads in British Asian comedy thanks to their sketch show, Goodness Gracious Me, which started off as a radio sketch show before moving to the small screen in 1998. This was Syal and Bhaskar’s breakthrough into showbiz.

The two friends went on to work together on The Kumars At No. 42 in 2001, then fell in love on a tour of Australia in 2003 and married two years later. Since then, they’ve had their son Shaan, in addition to Syal’s teenage daughter, Chameli, from her first marriage.

So what’s it like for them to work together? “Half the time, I don’t think he’s working at all, although he assures me he is,” says Syal. Bhaskar responds:

“What happens is I’ll have been working for hours. Then I play one chord on the guitar or I sit down to watch Match of the Day – that’s the moment she walks in.”

“Studio days can get complicated, because you’re both out of the house. Luckily there’s only one really long day in that studio. Other than that, we’re pretty much back for tea and bedtime, so it’s not so bad,” says Syal. 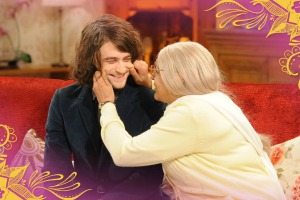 Even though there is less of the fictional family, this doesn’t stop the A-listers and high calibre guests from entering the flat.

The comeback episode featured Daniel Radcliffe, Olivia Colman and Richard E. Grant. If Syal had it her way, she’d love to have Prince Harry on the show to give him a good talking to.

Each week, the show will feature three celebrity guests who become the centre of the domestic chaos that Sanjeev tries to cover and overlook whilst interviewing, to deliver a great chat show.

The first episode aired on January 15, 2014 on Sky 1 and enjoyed nearly 400,000 viewers. You can easily catch up online, so be sure to tune in to future episodes.

The husband and wife duo are hoping the new series will prove just as popular as the previous series, with viewers and celebrities alike. Following a seven year hiatus, it is expected to win the British public’s heart all over again. So don’t miss out on the return of The Kumars!

Meera grew up surrounded with desi culture, music, and Bollywood. She’s a classical dancer and mehndi artist who loves everything connected with the Indian film and television industry and the British Asian scene. Her life motto is “do what makes you happy."
Hit or Miss Bollywood Films of 2014
Lakshmi wows International Film Critics