Indian thrash metal band Kryptos has been touring across Europe with their unique sound. In an interview with DESIblitz, they tell us more about the rising popularity of heavy metal in India.

The distinctive powerful, loud sounds of metal are hidden in the streets of India.

Metal music is becoming increasingly popular worldwide. And though we typically associate this genre of music with the West, it holds a definitive prominence in the East.

Kryptos is one such heavy metal band that is making its mark. Formed in 1998 in Bangalore, India, the band consists of Nolan Lewis, Rohit Chaturvedi, Ganesh K and Anthony Hoover.

The thrash metal band has taken the music scene by storm and is the first Indian metal band to tour Europe.

Keen to differentiate themselves in this unique niche of music, Kryptos’ musical sound is largely different from the rock and pop-rock music that we are used to hearing across India and Pakistan.

The main elements in metal are the driving power of the guitar, bass and drums. A significant auditory feature that gives metal the ‘heavier’ sound is the distortion of the bass and lead guitar. Essentially, this is how metal differentiates from rock music.

Despite clear the characteristics, there are numerous sub-genres of metal, brought about by adopting and reforming the styles, tone, pitch, speed and lyrical content. Such sub-genres include Thrash Metal, Death Metal, Progressive Metal, Glam Metal, Doom Metal and many more.

In a special interview with DESIblitz, Kryptos tell us more about the differentiators of metal music and how popular it really is across Asia. 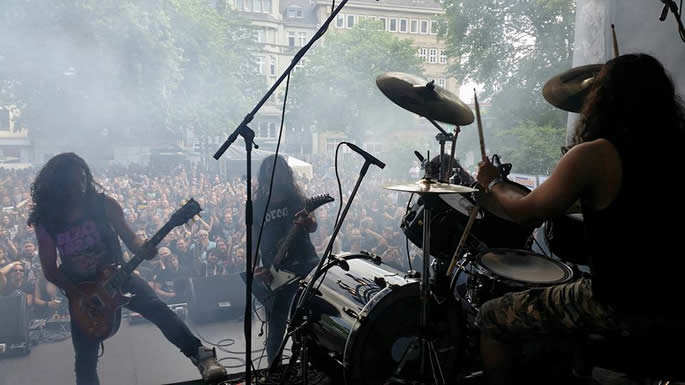 How did Kryptos come to be?

Haha, that’s a long (drunken) story, but in a nutshell, Ganesh (our bassist) and I were classmates in college and we were into the same kind of music, more or less. He was already in a band called 8 on the Richter, but after they split up we decided to form a band of our own.

We came up with a bunch of ridiculous names for the band, but the less sober we got that night, the better names we came up with haha. Finally, we settled on Kryptos, since it sounded all mysterious and stuff. I guess all teenagers pick band names the same way haha.

It just kind of stood out among all the names we chose. When we looked it up, we found out that it meant ‘hidden’ in Greek, which suited us just fine since our music pretty much straddles the line between 80’s heavy metal and 80’s thrash.

You could say we don’t exactly belong to either genre, but we exist in the cracks between both. Plus the name looks cool on t-shirts haha.

Anyway, the name stuck and within a few months, we played our first gigs in Mysore and Bangalore. And the rest, as they say, is history.

Who were your biggest influences when starting the band?

Our influences have always been the same, more or less, since day one.

But we always try and blend our influences to create something that’s ‘fresh’ yet ‘familiar’. So, you can always tell it’s us when listening to our music, but you could also pinpoint our influences quite easily as well. 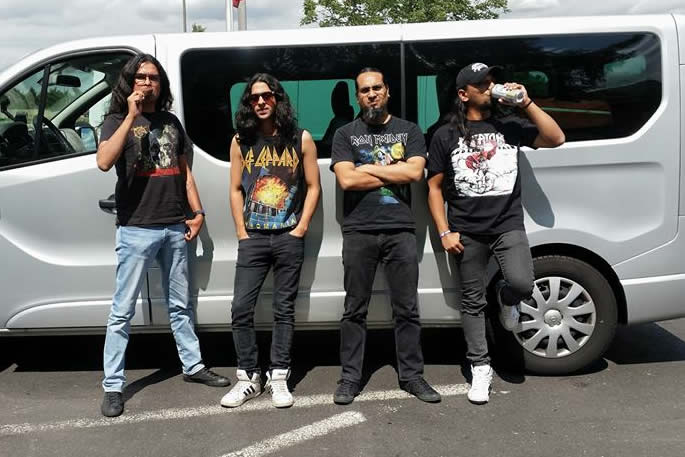 It’s a bit strange actually. Sure, it’s grown by leaps and bounds over the last 10 years or so, but I’m not so sure the quality of bands has improved.

There are tons of bands popping up all over India who are releasing albums regularly and playing gigs fairly often, but many of them don’t seem to have that ‘drive’ or ‘attitude’ that could take them beyond conventional boundaries.

“Most bands these days don’t really seem to ‘understand’ the music they play. Many of them watch a bunch of YouTube videos and then decide to form a band, but they fail to understand that to be a GOOD band, you need to really get ‘into’ the music you’re playing.”

Were you faced with any difficulties or stigmas surrounding metal music in India?

Nope, not really. I mean we haven’t really faced any issues from anyone regarding the music we play.

Of course, we get weird stares every now and then on the streets because of our hair or the clothes we wear, but on the whole, it’s been a fairly smooth ride. But, I guess that’s because metal in India is such a niche genre that it hasn’t really made any sort of ‘dent’ on the country’s subconscious.

If it started gaining in popularity on a country-wide scale, then we might see some people or religious/politic[al] groups take offence, because that’s what they love to do anyway.

Not many Asians in the UK openly listen to Metal. Do you see a difference between your audiences in the east vs the west?

Actually, there are quite a few, especially in East Asia. As far as I know, Indonesia, Malaysia, Thailand, Bangladesh etc. all have thriving metal scenes.

Unfortunately, we’ve never had the opportunity to play in any of these countries, but I’ve visited some of them and I have friends in all these places, so I’m fairly clued in on what goes on in the metal scenes over there.

As far as we are concerned, yeah there’s a definite difference between the audiences in the west, like Europe for example, and here in India or the rest of Asia.

Audiences abroad are very straightforward with you. If they like you, they really show it by picking up your albums or merch or even driving hours to watch your next gig.

If they don’t like your music they don’t bother with any of this stuff. Plus, for many of them, metal music is kind of ingrained in them, since it’s been around since the 70’s.

In India, people tend to be more ‘diplomatic’ haha, which is so typically Indian. No one wants to step on anyone else’s toes, so even terrible bands tend to have a fair number of ‘fans’. 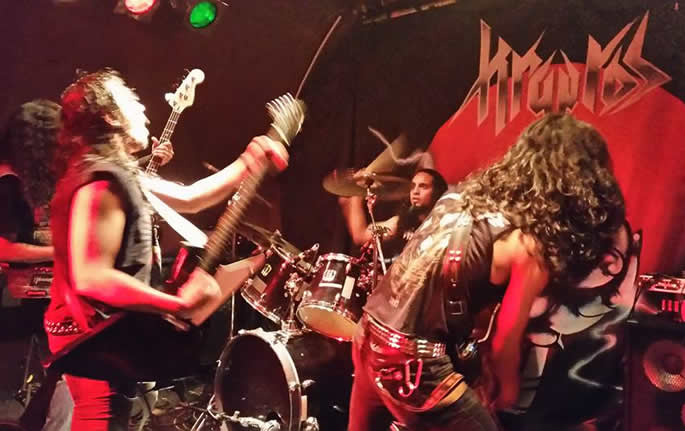 You’ve had tremendous success over the years. How does it feel to be the first Indian metal band to have toured parts of Europe and play a full set at Wacken Open Air?

I guess you could call it success, but for us, it’s just something that we should’ve been doing a long time ago. I guess as a band coming from India, where it’s quite difficult to keep things going, it could be considered a success, but it really is just par for the course on a worldwide scale.

Sure, it feels great that we’ve managed to tour Europe as often as we have, but once we’re done with each tour, we start working on the next one.

We don’t like patting ourselves on the back after every tour because we know that we have eons to go before we actually take the band to the level we want it to get to.

If we manage to do it, that’s great. Job done. If we don’t, at least we’ll give it our best shot.

What is the future of Kryptos? And will you ever tour the UK?

Right now we’re writing for our 5th album, which should be out later next year. We would love to tour the UK, but it depends on the offers we get. We did get some offers recently to come over there, but the finances just weren’t working out.

As you can imagine, touring costs a lot of money, so we have to be really careful when planning a tour abroad, because one false move could cripple us financially. But, yeah, the UK is on the cards in the near future, so we’ll get there eventually.

Any words of wisdom to those who wish to pursue a career in metal?

Yeah. Just don’t. Haha! Nah, just kidding. But, the bitter truth is it is extremely difficult to make a ‘career’ out of being in a metal band.

Even some of the biggest metal bands have regular day jobs, so it really isn’t all sex, drugs and rock n’ roll. Ok, maybe a bit, but you get the picture haha.

“In any case, if you really want to get your band somewhere, just give it all you got. It takes a lot of sacrifice and patience to keep a band going in this day and age.”

And most importantly, always remember to have fun while doing it.

Listen to the top 5 songs of Kryptos here: 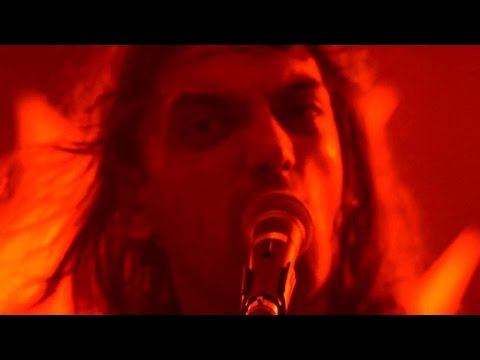 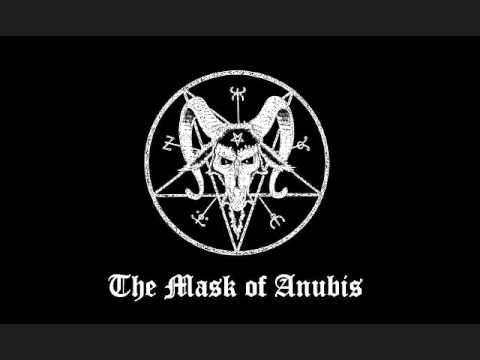 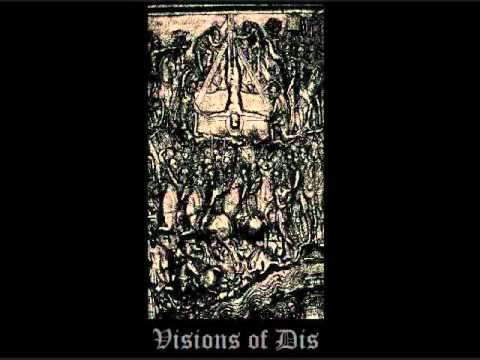 Kryptos’ extraordinary musical talent clearly shows that Indian metal is very much alive and rocking! And it is pretty fair to say that music holds no cultural boundaries.

As we see the rise of Western influences in the Indian music industry – both pop and urban rise at a parallel rate to metal, whether it be recognised as mainstream or not.

Find out more about Kryptos and their latest music on their Facebook page here.

Harleen is an aspiring poet, novelist and activist. She is a metalhead who loves all things Bhangra, Bollywood, horror, supernatural and Disney. “The flower that blooms in adversity is the most rare and beautiful of all” - Mulan