The ZEE Jaipur Literature Festival (JLF) is the perfect destination for bibliophiles the world over. Dubbed as the ‘World’s Largest Free Literary Festival’, JLF welcomed some incredible artists and writers for 2015.

The festival explored cinematic adaptations of literature in the Indian film industry.

Celebrating the best of South Asian art and literature around the world since 2006, the eighth edition of the annual ZEE Jaipur Literature Festival (JLF) took place between January 21st and January 25th, 2015.

Regarded as the cultural catalyst of the world, JLF is a ‘space to dare, dream and imagine’. For 2015, this free and open-to-all festival recorded 245,000 footfalls over its 5-day duration.

Not only has the festival attracted a ‘galaxy of literary stars’, it has also released a total of 19 titles. 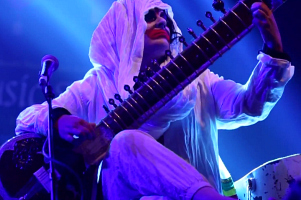 But the JLF is not only about books, there is also music, films and theatre. The 2014 Music stage at the JLF was rated as one of the five greatest music festivals in the world by the Guardian.

From Sufi to soul and from folk to fusion, the 2015 Music Stage featured a memorial concert for Cheb I Sabbah, Godfather of the Asian Underground, and Grammy award-winning Tinariwen.

Dedicated to embracing the blurring distinction between media, the festival explored cinematic adaptations of literature in the steadily evolving Indian film industry.

The festival also provided a platform for the confluence of different media and acknowledged the literary contribution of many writers in India and the world.

Young authors who participated in the annual writing competition also got a chance to have their work published on the festival’s official blog and win a coveted invitation. 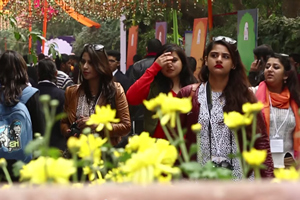 Additionally, the eighth edition of the festival gave back to the local community of Jaipur by encouraging new local writers.

Local students had the opportunity of meeting and learning from Pulitzer-Prize winners, international illustrators and world-class poets, novelists and journalists through the festival’s outreach and engagement programmes.

Some writers also visited local schools to promote literacy in the state prior to the festival commencement. The JLF has definitely gone one step ahead this time – shifting gears from involving only the inner literary circles to engaging new audiences through outreach activities.

Ranging from the global economic crisis to the rise of e-books, the current state of politics in the Middle East to the increasing importance of Indian language publishing. There was bound to be something to intrigue the mind and soul of everyone! 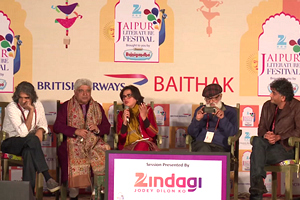 History occupied an eminent position at the festival. From discussing the second world war and colonial life in Delhi, to the untold story of China’s devastating eight-year war of resistance against Japan. There was a little of history infused into everything.

The state of Rajasthan in which Jaipur is a colourful and vibrant asset of India. And the festival did justice in showcasing the beauty of its location, its rich oral tradition, joyous music and rhythmic poems and ballads.

In all, the festival was a sigh of relief in the strictly censored literary climate of India. With creating and celebrating freedom of expression at its heart, the JLF featured a live cartooning session with well-known illustrator, Manjul.

But literature and art were not the only things that gained attention at the event. The mystery of science, mathematics and technology was also pondered upon deeply. 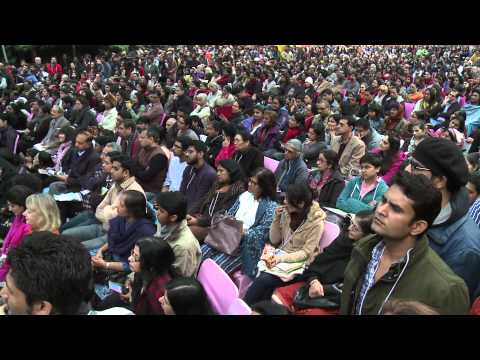 Good things apart, the weather took a toll on the event this year. Heavy showers washed down the enthusiasm of many visitors as outdoor talks had to shift in.

Consequently, many programmes were cut short, some almost in half. While some detest the unfortunate timing of the weather gods, some expressed that the rain lent a dash of romance to the thing of literature.

You can watch the talks and musical programmes from each day on the Jaipur Literature Festival YouTube Channel.

There is much to look out for in next year too. With Margaret Atwood, Kazuo Ishiguro, Michael Cunningham and Rohinton Mistry to look forward to, 2016 is probably going to be as exciting if not more.

In case you wish to plan ahead, the festival usually takes place in January in the pink city of Jaipur, India. But for all the literature enthusiasts out here in the UK who cannot wait so long, the JLF will be coming to London in May 2015 and hosting its first ever event abroad.

This is in partnership with Alchemy, the Southbank Centre’s festival of South Asian culture. For more details, please visit the Alchemy website.

Simon is a Communication, English and Psychology graduate, currently a Masters student at BCU. He is a left-brain person and enjoys anything artsy. At his best when asked to do something new, you’ll find him dwell on “Doing is living!”
Jhumpa Lahiri wins prestigious DSC Prize for 2015
Top 5 Indian Erotica Authors