Invisibility Cloaks made with Light

Scientists at Cambridge University have published a study on a new kind of metamaterial that can reflect light. The discoveries could lead to invisibility cloaks being a reality, instead of a fiction.

This new "metamaterial" could reflect and bend light to make an object invisible.

The idea of invisibility cloaks has so far been confined to Harry Potter and comics; but researchers at Cambridge University have recently published a paper that details how materials built with light could make this phenomena a reality.

The study was published on July 28th in a scientific journal named Nature Communications, and explains how a new form of material could be made which interacts with light in an entirely new way.

The researchers have discovered a new technique of creating materials out of tiny building blocks that are only a few billionths of a meter wide. This is approximately the same width as a strand of DNA.

As these building blocks are joined together to create what has been dubbed a ‘metamaterial’, a cumulative effect is achieved which means that the whole material could reflect and bend light to make an object invisible. 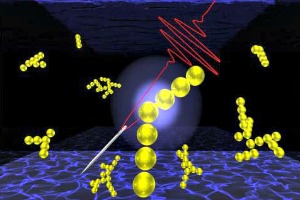 The reason for this is that as light hits any object, it either becomes absorbed into it, or alternatively reflected. This is what makes us able to see the object, as light is refracted in the usual way that our eyes expect.

However, these new ‘metmaterials’ will be formed in such a way that they can manipulate the light to make objects appear invisible to the human eye, or possibly look like something else.

Making these ‘metamaterials’ is a lengthy and challenging process. Scientists must use unfocused laser light as needles, stitching numerous gold nanparticles into long strings. After this, the strings are then stacked on top of each other.

Researchers have said in a statement that they can see many uses for these materials, such as sensing drugs or explosives or military operations that require stealth.

Dr Ventsislav Valev, who worked on the project in Cambridge’s Cavendish Laboratory, says: “We have controlled the dimensions in a way that hasn’t been possible before. This level of control opens up a wide range of potential practical applications.”

Yet he also cautioned that there is a lot of work to be done before we can expect to all own a Harry Potter style invisibility cloak: “Joining a few nanoparticles together is fine, but scaling that up is challenging.”

Indeed, more development does need to be done before this new technology can produce anything of a large scale.

When the ‘metamaterials’ are made, the technique that scientists use to join each nanoparticle to the next one needs to be made more advanced.

These particles will in the future need to be attached to each other electronically, as the usual methods of welding would actually melt the tiny particles.

This would require scientists spacing out the building blocks of the ‘metamaterials’ using barrel-shaped molecules which are known as cucurbiturils, so that they can maintain a high level of control over the process.

These cucurbiturils are thought to be the key to making these materials possible on a larger scale, as they should provide the precise control scientists are looking for.

Dr Valev confirmed this view, by saying: “It’s about finding a way to control that bridge between the nanoparticles.”

The whole process of forming these new materials will require a lot of research and a high level of accuracy.

Though more research and experimenting obviously needs to be done, these initial developments do look promising and exciting.

Within a few years, this technique could be making ‘metamaterials’ on a scale that the general public, as well as scientists, can observe. We could be one step closer to having our own invisibility cloaks, hopefully we don’t have to wait too long!

Eleanor is an English undergraduate, who enjoys reading, writing and anything media related. Aside from journalism, she is also passionate about music and believes in the motto: “When you love what you do, you’ll never work another day in your life.”
DIY Desi Wedding Ideas
SCiO ~ First Pocket Molecular Sensor