An Indian woman based in Canada married her Bangladeshi partner in a traditional ceremony after meeting on a dating app.

"Fortunately, we didn't have too many hurdles."

An Indian woman married her Bangladeshi partner in a traditional Tamil Brahmin ceremony.

Subiksha Subramani and Tina Das live in Calgary, Canada and they met on a dating app.

They were in a relationship for six years before deciding to get married.

Subiksha, who identifies as bisexual, wanted to have the wedding in India.

She explained: “My family is from India and our roots are from here. Only my immediate family lives in Canada.

“My brother’s marriage was in India and my marriage would have been in India if I were to marry a guy and this is no different from the situation and I wanted to have a traditional Tamil wedding and that is where the wedding happened.” 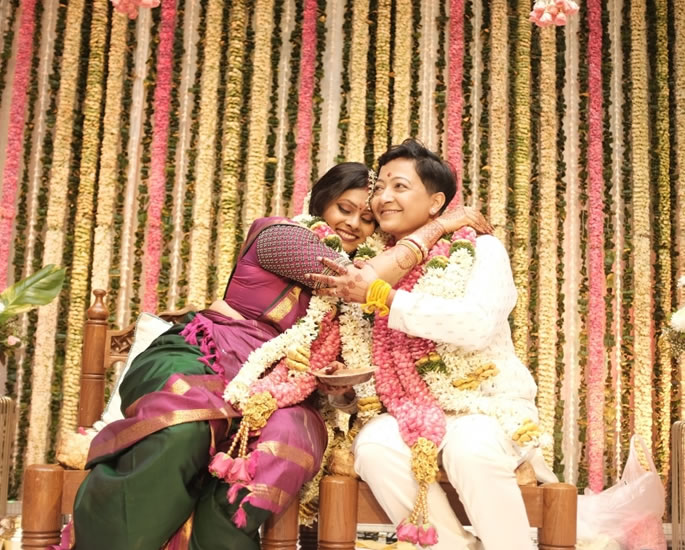 Subiksha’s mother was immediately onboard but her father wanted them to marry in Canada as he feared some people would be against the same-sex marriage in India.

But for Subiksha, having her family and extended relatives at her wedding was a dream.

“When we started planning the wedding, everyone was so supportive. Fortunately, we didn’t have too many hurdles.”

Tina was also supportive of her partner, saying:

“I feel great because this is my first time coming to Tamil Nadu and I don’t know how to express my feelings. Her whole family was there.

“The wedding was amazing, it was like a dream come true.”

The couple wanted all the proper rituals but the biggest obstacle was finding a pandit.

After speaking to several people, they were able to find a pandit who was from the LGBTQ community.

Subiksha explained: “The pandit was a Sanskrit scholar and he is also part of the queer community.

The couple has faced challenges in the past.

Bangladeshi-origin Tina was married to a man when she was 19.

She recalled: “I was married when I was 19 and Bangladeshi people are very conservative and think being gay is a crime.

“When they found I was dating a girl they (family) said if I get married things will change. I had no one to talk to. For 4 or 5 years of the marriage, I felt something was not there.

“I had to choose between my family or myself. I stuck to the person sacrificing my feelings. It was seen as some sort of disease.

“Later they said have a child and things would be different. But when I had to go through treatment for conceiving, that is when I decided to put an end to it and choose myself and my happiness.” 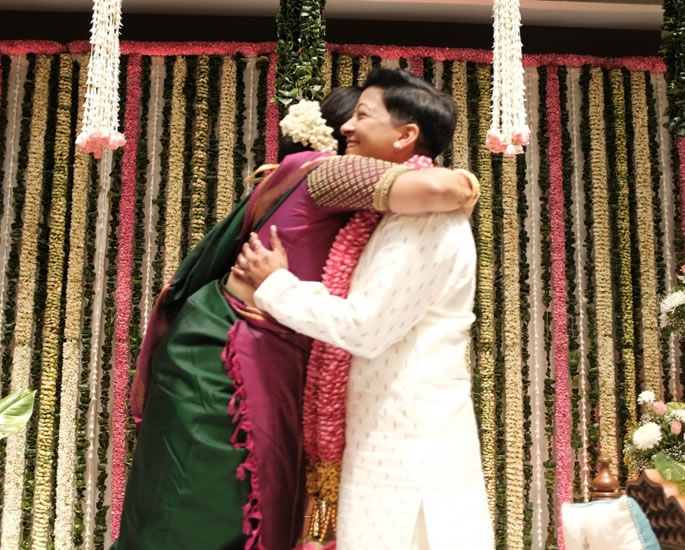 On the other hand, her partner, who had dated men in the past, wanted her family to understand that it was okay to have a same-sex partner.

She urged her parents to meet a counsellor to help them better understand the LGBTQ community.

Subiksha said: “I suggested that to my parents as mental health is very important and a third person outside of the family to talk about this would help.

“My sister-in-law and brother connected my parents to a therapist and it really helped. Us living with our parents also helped.

“Seeing Tina as a partner to me helped my parents understand better and also see how happy we were.”

The couple now hopes that their marriage will help more LGBTQ people to open up about their orientation and lead a happy life.

Subiksha said: “After looking at our wedding and our pictures, if someone who was afraid to come out, makes the plunge and gets a chance to live their lives truthfully, it will be great.

“My life’s mission is to create a better life for the next generation of queer people.

“Even if there are a bunch of trolls who send out nasty comments, it is ok, as long as there are people in the community who can draw strength from our lives.”

“With Subi and Tina‘s wedding I think everything was the same, just like any other wedding, but it was a notch deeper.

“The struggle was real, it is not easy for a lesbian couple to get together and get married in a city where they belong.

“For the entire family, including the grandmother, to support this and to understand and be supportive is a rarity.”

“We had an opportunity to be closer to them for almost a year and to be talking to them and understand the story and to be a part of this event was nothing less than being a part of history. That is how it felt.

“We don’t know how many more weddings like these we will be part of.

“It was not a fanfare or a random party that was thrown. It was more about the family saying we are with the girls.

“They are a perfect couple. Tina has had a difficult story and Subi is coming from a similar background and both of them come together and find love and provide for each other.

“I think that is what matters in a relationship.

“The story was extremely interesting and we were clear that we wanted to reflect their story and personality and we didn’t want to do any exaggeration or kind of sensationalise that was us showing our support to their relationship.”

The couple married in Chennai on August 31, 2022, and are now enjoying their honeymoon.