An 83-year-old Indian man has hit headlines after he weds a much younger woman in Rajasthan. However this marriage wasn’t for love, but instead, he wanted a son to look after his ancestral property.

"My first wife has no problem with this wedding. We only want to have a son."

An 83-year-old Indian man has married a much younger woman, making national headlines, in order to have a son who would look after his property.

Identified as Sukram Bairava, he wedded the woman, aged 30 years old, in the village of Samrada in Rajasthan. Huge crowds gathered to watch the union, with reports saying residents from 12 villages attended.

The 83-year-old dressed formally, wearing a white sherwani and mounted a horse to lead his baarat. The newly-weds also allegedly followed all the rituals for the marriage.

Reports reveal that Sukram lost his only son around 15 years ago due to illness. While he also has two daughters, who are married, the 83-year-old still wanted a male heir to his estate. He told reporters:

“My only son passed away almost 15 years ago when he was only 30. I had worked as a labourer and then as a contractor in Delhi, Haryana and Rajasthan and have enough property and there is nobody to look after it. So, I was keen to get married again.”

Sukram has a considerable amount of equity, which includes lands in Rajasthan and a plot in Delhi. But he is still married to his first wife, named Batto. They wedded back in 1958.

In an arguably surprising move, the Indian man received approval from his wife to have the second marriage. But this is only on the condition that they marry to have a son. He said:

“My first wife has no problem with this wedding. We only want to have a son.”

Times of India reported how some of the villagers felt shocked at seeing the union. One guest, named Ramji Lal Meena, said: “It was the wish of the old man, what can we do?”

A family member of the bride also told reporters: “[She] was single and her family agreed for the marriage.” Afterwards, viral images have emerged of Sukram and his wife, along with moments of the wedding. 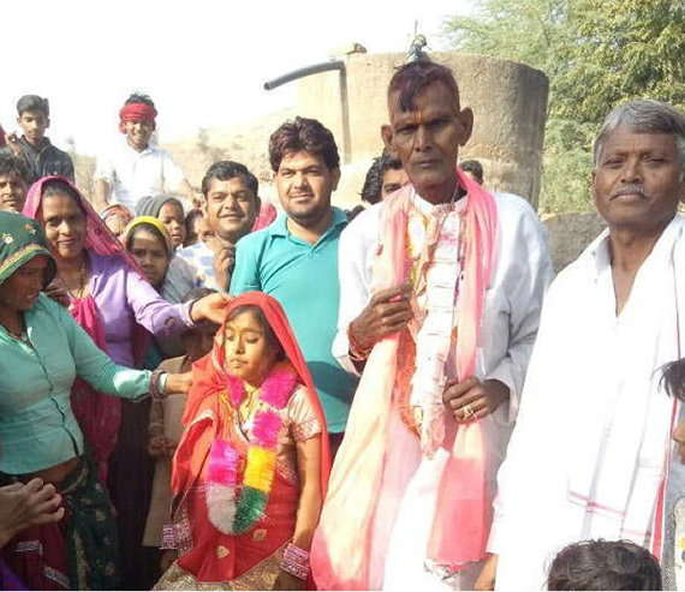 Sukram stands tall with his sherwani, while his bride, dressed in red, is next to him. However, the images seem to suggest she could be even younger than 30 – unless she does have an unreported condition.

As news spreads, officials have spoken on the union as it still counts as bigamy, which is illegal in India. Additional District Magistrate Rajnarayan Sharma told press at the time: “Presently, I am not aware of this incident.”

Zila Parishad chief Surendra Maheshwari later revealed that he issued orders for an investigation into the marriage. Superintendent of Karauli Police Anil Kayal, who is involved with the case said:

“A man getting married to a woman in presence of his first wife without any legal divorce is a non-cognizable offence.

“Thus, a committee has been formed which will recorded the statements of [the 30-year-old woman] to enquire under what circumstances she was married to a 83-year-old [man]. Things like if she was allured with money or was intimidated are to be probed. [sic]”

A senior officer explained they would take statements from Sukram and his new wife. He added:

“They will also record the statements of the family of the woman to know if they had any pressure, threat or intimidation to agree for a marriage with a man who is 83-year-old and is already married.”

For the time being, police will continue their investigations into the marriage.