An Indian woman has broken convention by joining a married couple to become a throuple. The trio has been together for over a decade.

"It has taken us years to outgrow jealousy and insecurities"

An Indian woman who migrated to California, Piddu Kaur, aged 31, has formed a polyamorous throuple with her married friends Sunny and Speetie Singh in the US.

Piddu had reportedly had an arranged marriage with an Indian man from California in 2009.

But this parental match quickly broke down. Her marriage ended in divorce just months after she tied the knot.

To get away from her ex-husband, Piddu left California and moved to Indiana.

After her relocation, Speetie Singh aged 36 and Sunny aged 40, her childhood friends who had attended her wedding, invited Piddu to come and stay with them at their home for a week.

Not long after she moved into the Indianapolis home with the couple, Piddu formed a close emotional and physical connection with Speetie.

After which, husband Sunny welcomed the idea of allowing another woman into their marriage, and the couple with Piddu formed a throuple.

Where a throuple is a consensual and intimate relationship between three people.

Before they settled in the US together, Sunny and Speetie were childhood sweethearts who had met in India. 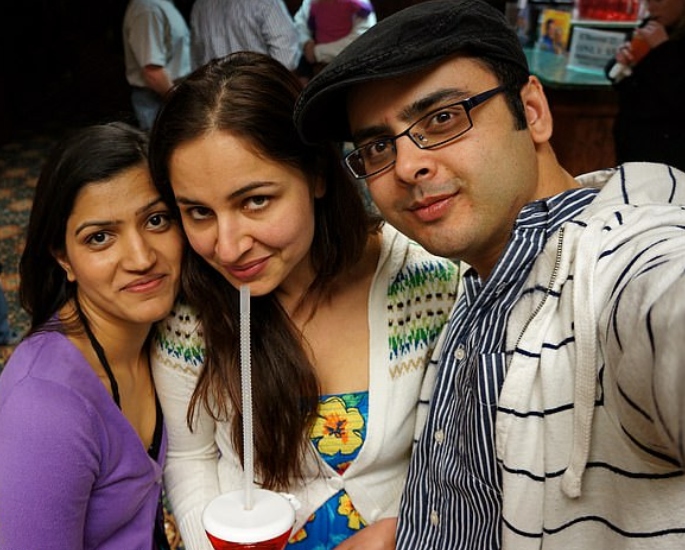 According to the Daily Mail, the pair got married in 2003 in a traditional Indian ceremony.

Speaking about their romance and marriage, Speetie says:

“Sunny and I were teenage sweethearts. Having been born in [Punjab], he moved to [New York] with his parents [when he was eight].

“We ended up writing back and forth for years and eventually ended up happily married.”

Whereas Piddu’s arranged marriage, involved the man marrying her because of pressure from his parents and that her parents had promised a Mercedes car as a gift.

Speetie was not new to a relationship with another woman. Before moving to America at the age of 18 to be with Sunny, Speetie had been in a same-sex relationship. 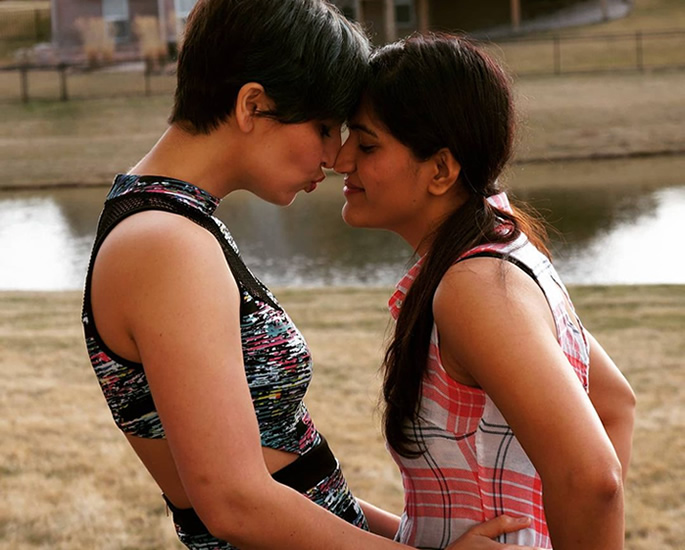 Speetie opened up about her previous relationship with another woman to Sunny during her first year of marriage in a hesitant manner.

Sunny’s reaction to it was of acceptance and was fine with her relationship with Piddu as well.

With the presence of Piddu in their home, he formed his own feelings towards her as well.

It was at this point, the couple decided opened up to let her into their relationship and marriage.

Piddu’s original one week stay has since turned into a polyamorous relationship for the three of them which has spanned over ten years.

Happy with their relationship, Speetie says:

“We’ve been a triad for more than ten years and we love it.”

Still together as a throuple, the trio are living together and raising four children. 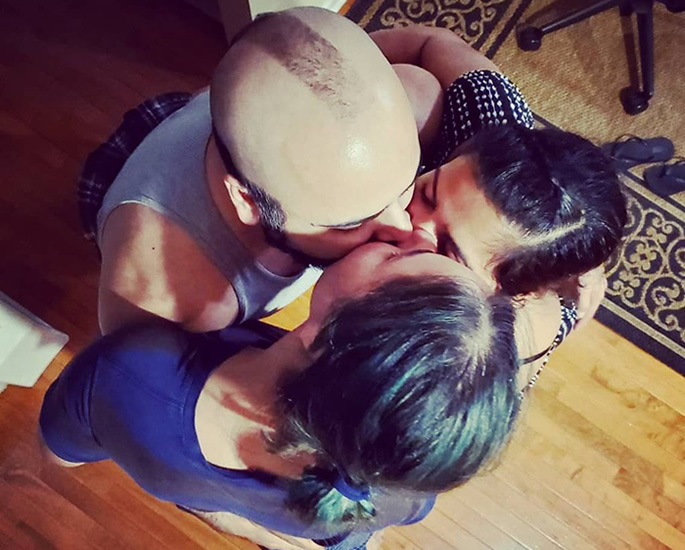 Before Piddu moved into their home, Sunny and Speetie were parents to two teenage daughters. Cookie aged 16 and Kissie aged 15.

After the progression of their relationship as a throuple, they have had another two children.

Speetie had another girl named Toska who is nine-years-old. Piddu then added to this unique family by giving birth to their youngest child, Bab, aged four. 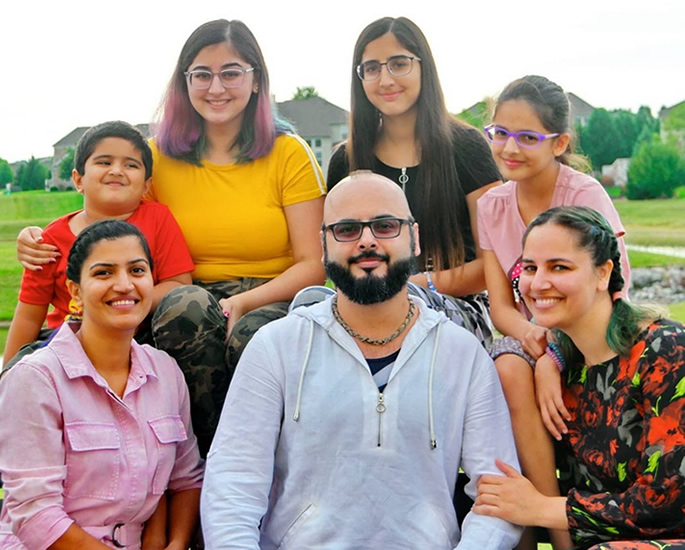 Speaking about her relationship with Piddu and the formation of the throuple, Speetie says:

“When Piddu came into our lives, she was going through a divorce immediately after her marriage. Piddu and I hit it off right away.

“Our endless conversations, crying on each other’s shoulders and laughing and dancing nonstop to high beats brought us closer in no time.

“Our attraction wasn’t just emotional, we were clearly into each other and soon had our hands in each other’s [panties].

“Sunny was ecstatic to have found another partner to share ideas with and fulfil his fantasies with too.

“The kids were instantly accepting as Piddu is so naturally empathetic and caring.”

As with any kind of relationship which can involve more than two people in this way, there were no doubt some struggles with feelings, emotions and insecurities for the trio.

Jealousy and insecurity were major challenges for Speetie. She admits it took her years to overcome these.

Speetie also had fears that Sunny may leave her and only want to be with Piddu. Irrespective of him insisting that he was fully content to be with two women.

“Being in a unique setup has helped us grow immensely and we understand our emotions better every day.

“It has taken us years to outgrow jealousy and insecurities yet each fight has brought us closer.

“Despite them both showering me with love, I often used to hear an insecure little voice in my head saying, “What if she steals Sunny from me and runs away?” and I reacted in fear of this by being a b***h to Piddu.”

Rules were introduced by the trio to minimise their feelings of jealousy amongst each other.

They decided that any intimacy within the relationship would involve all three partners or none at all.

They agreed to have no date nights separately. Secrets between the throuple were also forbidden. 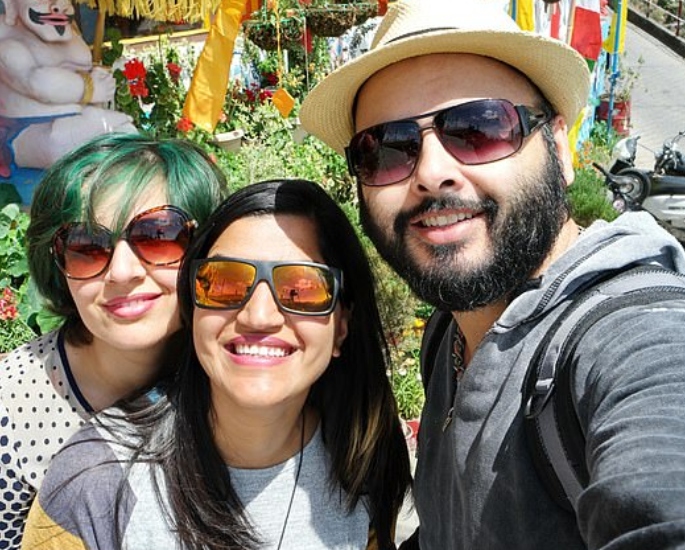 A throuple is not the kind of relationship that would be readily accepted by families from a traditional Indian background. Where even an inter-caste marriage between two people is still a huge problem.

Therefore, for the trio, it meant they had to force themselves to cut ties with some of their extended family.

Speaking about this Speetie says:

“A few family members and old friends felt uncomfortable or drew lines in the sand and said that they couldn’t deal with us unless we separated.

“So we did. We separated from those people.”

Speetie adds that out in the big wide world, they do attract attention, saying:

“We get all sorts of confused stares when we are out in the world. Most are curious about exactly how we work.

“Many assume at first that we’re just in it for the sex until they realise we’ve been together for longer than many marriages last.”

When it comes to Sunny and how the relationship works for the women, Spettie says:

“Most men either say Sunny is lucky or pity him having to deal with twice the ‘trouble’ and women want to know more about how it all works, especially in the bedroom.”

On New Year’s Eve 2020, the throuple had decided to celebrate ten years of being together by performing a ceremony. 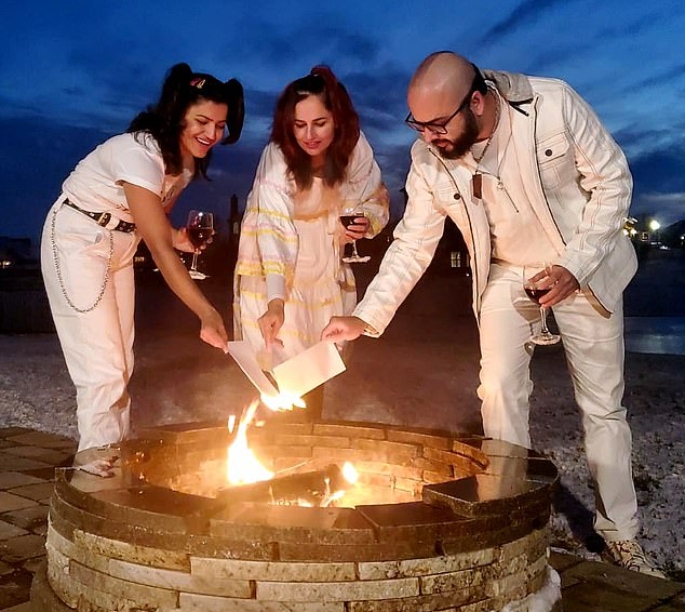 They wrote down the insecurities that they had felt in the past, sealed these in envelopes and set them on fire.

The throuple have shown that polyamorous relationships can survive the test of time.

They hope that the upcoming decade will prove just as fruitful for them as the one just gone.

As a testament of their polyamorous relationship, Speetie says: “It is possible to love more than one person. This is the life we love to live.”