CCTV has captured a terrifying moment where an Indian clothes worker topples over a balcony after the clothes bundle she is holding makes her lose balance.

It was much too late to help the woman who fell to the ground.

CCTV footage has captured a chilling moment when an Indian clothes worker fell off of a first-floor balcony.

It is thought that a colleague walking by her whilst she was holding a heavy bundle of clothes caused her to lose her balance.

The woman, who is currently unidentified, was just one of a team of saree vendor workers who were visiting a housing complex in Surat, Gujarat.

She was injured by the fall as she fell to the ground crashing through a clothesline that held drying garments. 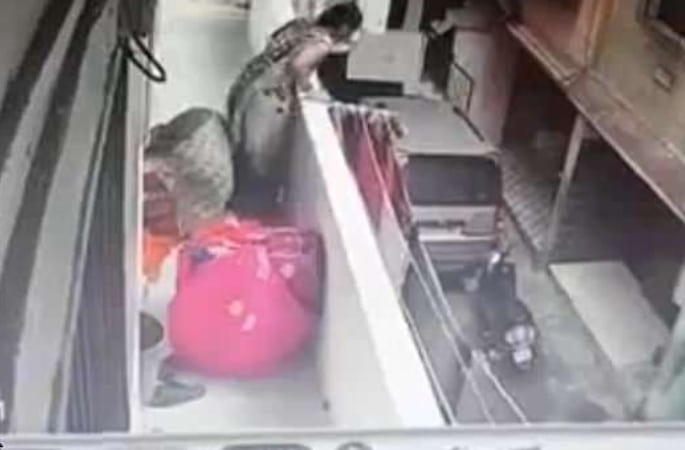 The footage shows the woman carrying a bundle of clothes on her head through a narrow corridor on the first floor of the complex. To make way for her colleague, she moves to the side.

Her colleague has an even larger bundle of clothes, that she was also carrying upon her head, and it seems to knock into the injured woman’s clothes.

As she pushes past, the clothes worker loses her balances and tilts towards the very edge of the balcony. The heavy weight of the clothes rested upon her head causes her to topple backwards over the balcony.

She is unable to stop herself from falling due to the weight of the clothes. The dramatic footage shows her helplessly falling backwards.

Moments later, her fellow vendors rush over to the edge the balcony and peer over. However, it was much too late to help the woman who fell to the ground.

Four women are shown looking over the balcony at the injured saree vendor where the accident took place.

It is clear from the footage that the fall was completely unexpected. Particularly as it is not uncommon for women in India to carry heavy loads on their heads while they travel from place to place.

While the practice is more apparent in rural, open areas where there is a less chance of accidents taking place, it can be potentially impractical when it comes to high rise urban areas where buildings are close together and walkways are much narrower.